The bagpiper was barely off the ice when Manitoba’s Jennifer Jones rocked Alberta’s Val Sweeting with a four-ender on the first end of their Scotties Tournament of Hearts Page 1-2 game.

Non-partisan and Alberta fans groaned. This was not the close game they wanted to see. Jones made an outstanding first-rock double and then a routine tapback to hang the four on the board. Jones had said how important the hammer would be on the first end. That was a good chunk of the motivation for winning that final round-robin game. The Manitoba skip was right, four times over. “We made some great ones and some not-so-great ones,” Jones said, after finally recording an 8-6 win over Sweeting’s stubborn Albertans. “But we never lost control of the game. We had control and the last one coming home which is what you want, so I am really happy with that. We’ll try to take some of that momentum into the final Sunday.” The first end was somewhat reminiscent of Sweeting’s final two games in the round-robin. Earlier Friday, Jones defeated Sweeting 10-5. Before that, Sweeting was defeated 9-1 by Saskatchewan’s Stefanie Lawton. Alberta had gone from 9-0 in the standings to 9-2 in 16 ends. So there were reasons to believe Sweeting and her crew of Lori Olson-Johns, Dana Ferguson and Rachelle Brown might be finished for the night, and have 18 hours to regroup for today’s 3 p.m. semi-final against either Team Canada’s Rachel Homan or Lawton. Those two play in the Page 3-4 game at 10 a.m. at Mosaic Place. But that is not how it worked in the one-two game. That is not how Sweeting rolls. “She made a really good shot to set up that four, but we battled and I am really proud of the team,” Sweeting said of Jones’s first rock of the game. She said her team had to plug away, get a deuce and battle. And battle she did, drawing even after the seventh end. Jones said she didn’t let up after the four-ender. “They made some great shots and we were just a little bit off.” A single on two, and steals on ends four and five, made the game 4-3 at the break. Jones, who is backed by her well-known crew of third Kaitlyn Lawes, second Jill Officer and lead Dawn McEwen, made a draw to the button to count one on the sixth end, to take a 5-3 lead into seven. Sweeting’s team played a flawless seventh to count two. Game on, baby. Manitoba ditched the defence on the eighth, with the teams beginning the end with one of those you-freeze-on-mine and I’ll-freeze-on-yours scenarios. 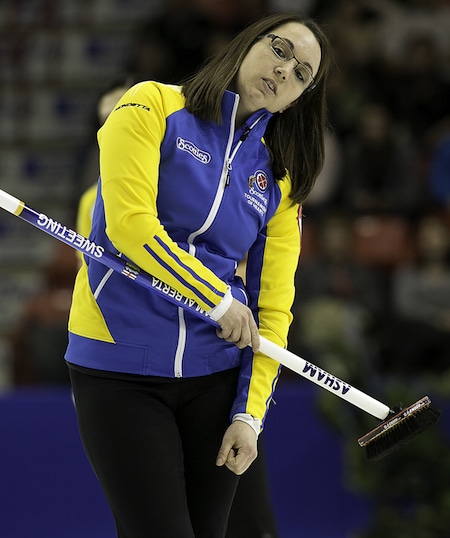 The end was played in the four-foot where at times five rocks congregated. Alberta’s were set in the better positions, forcing Manitoba to play three straight up-weight shots to move the mess around. A Sweeting jam with her last rock gave Jones an easy hit for two. That was the turning point Sweeting said. “I was an inch off on both of mine on eight and I think that really changed the game in the end.” Alberta was set up for a deuce on nine, but Jones took it away with a double. Lawes also made a double. Sweeting was forced to take one, leaving her down 7-6 coming home. After a couple of tick shots executed by McEwen, Sweeting was unable to generate any offence. Jones had to make a draw, with backing, to win the game and close out the 8-6 victory. “It really sucks to lose three in a row, but we’re still in this and the dream is still alive so we need to shake that off and come back strong,” Sweeting said. “I am so proud of my team and the crowd was amazing. We will just have to come back strong tomorrow.” For ticket and other event information, visit https://www.curling.ca/2015scotties-en/ For the complete schedule, go to https://www.curling.ca/2015scotties-en/draw-schedule/ TSN (RDS2 in French), the exclusive television network for the CCA’s Season of Champions, will provide complete coverage of the 2015 Scotties Tournament of Hearts.