Kevin Koe shook off a case of suspected food poisoning to lead Alberta to a critical 7-3 victory over Mark Kean of Ontario Sunday in the fifth draw of the 2015 Tim Hortons Brier, presented by SecurTek Monitoring Solutions. 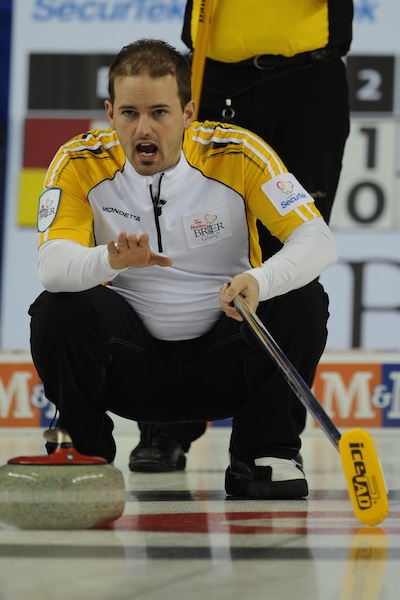 It was the first win in three games for the Calgary team of third Marc Kennedy, second Brent Laing, lead Ben Hebert, alternate Jamie King and coach John Dunn. “I don’t know if it was food poisoning or a flu bug but it hit pretty quick,” said Koe, who curled 93 per cent after going 70 and 61 per cent in their two losses. “Could have been worse, it only lasted a day.” Last year’s Brier winning skip said he was throwing up on Saturday before he left for the arena and between a couple of ends and still wasn’t 100 per cent in their 9-5 loss to Northern Ontario Sunday morning. “Luckily we bounced back with a big win tonight, we needed it. A bit of a hole, 0-2 but it’s not the end of the world. I can see things bunching up.” Koe looked and played a lot better Sunday evening. He made two nearly perfect draws to the button in the second and fourth ends – while forcing Ontario to singles in the first and fourth ends, to build a 4-2 lead after five ends. In the eighth he had ideal weight and direction to tap back a Kean stone to scored two and carry a 6-3 lead into the ninth. “Kevin doesn’t play 60 per cent very often unless he’s feeling like crap,” said Kennedy. “But it was a gutsy performance just to be out there. There was some puking going on between ends. We had discussed him not even playing … but we left the option up to him. But how do you compete against some of these skips when you have wobbly legs.” Adam Casey of Prince Edward Island (Charlottetown) and his team of third Josh Barry, second Anson Carmody, lead Robbie Doherty and alternate Robert Campbell, followed up their impressive win over Team Canada in the afternoon draw with a 6-5 win over veteran Jim Cotter of B.C. (Vernon). That improved the P.E.I. crew, the youngest team in the Brier to 2-1. Casey was looking at four B.C. counters with his final rock in the 10th end and his draw just hung on to the four foot to cut Cotter to a single. “We played real good early,” said Casey. “The eighth and ninth ends I felt like we threw away some extra points and got lucky. We made the last end a lot more exciting then I hoped we would.” On his final shot he felt it was a good shot until his sweepers pulled their brooms off “and it just kept sliding. Fortunately it just hung on.” 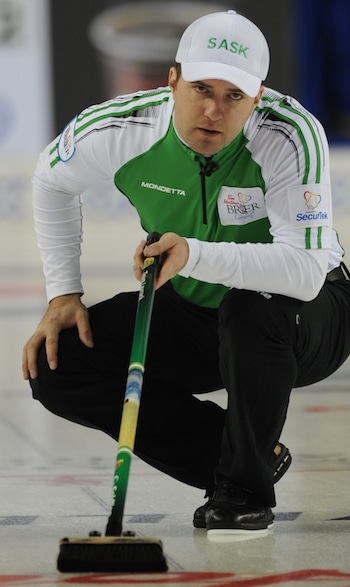 Steve Laycock and his Saskatoon, Sask., team of third Kirk Muyres, second Colton Flasch, lead Dallan Muyres and alternate Gerry Adam scored in bunches to knock off Jamie Koe of the Northwest Territories (Yellowknife) 10-6. Saskatchewan scored two in first, four in the fourth and four in the seventh to improve to 2-1. In the other evening game, Reid Carruthers of Manitoba (Winnipeg) scored deuces in the third and sixth ends to beat Jeremy Mallais of New Brunswick (Saint John) 9-4 for his first win. The results leave Northern Ontario and Newfoundland-Labrador at 3-0, Ontario, Saskatchewan and P.E.I. 2-1, B.C., Quebec, Manitoba, Alberta and Team Canada at 1-2 and the Northwest Territories 0-3. There’s only two draws Monday — 1:30 p.m. and 6:30 p.m. MT. TSN/RDS2, the official broadcast partner of Curling Canada’s Season of Champions, will provide complete coverage of the Tim Hortons Brier, leading to the gold-medal game on March 8 at 5 p.m. The winner of the 2015 Tim Hortons Brier will represent Canada at the Ford World Men’s Championship, March 28-April 5 in Halifax, in addition to qualifying for the 2015 Home Hardware Canada Cup in Grande Prairie, Alta., the 2016 World Financial Group Continental Cup in Las Vegas and the 2016 Tim Hortons Brier in Ottawa For ticket information, go to www.curling.ca/2015brier-en/tickets/ This story will be posted in French as soon as available at https://www.curling.ca/2015brier-fr/