Brad Jacobs and his Northern Ontario team rolled to a fourth straight victory but it was the huge sigh of relief from John Morris and Team Canada that had the Scotiabank Saddledome crowd abuzz Monday at the 2015 Tim Hortons Brier, presented by SecurTek Monitoring Solutions.

Morris made a superb runback double with his final stone in the 10th end and New Brunswick skip Jeremy Mallais then came up inches short with his final rock to allow Canada to score two and steal a 6-5 victory. “It’s hard to celebrate after that because they played unbelievable,” said Canada second Carter Rycroft. “And they’re great guys, great team and their skip made everything until that last one. So we’re breathing a sigh of relief.” In other games in the sixth draw, Jacobs and his Sault Ste. Marie team beat Jamie Koe of Northwest Territories (Yellowknife) 9-4, Jean-Michel Ménard of Quebec (St-Romuald) scored one in the 10th to nip Adam Casey of Prince Edward Island (Charlottetown) 6-5 and Brad Gushue of Newfoundland-Labrador (St. John’s) lost his first game 6-3 to Jim Cotter of B.C.(Vernon). Jacobs had little difficulty rolling to his fourth victory, scoring two in the second, stealing one in the third and cracking a four-ender in the fifth. The teams traded deuces in the seventh and eighth before Koe and his crew shook hands. But Morris and his team of third Pat Simmons, Rycroft, lead Nolan Thiessen, alternate Tom Sallows and coach Earle Morris, were in tough against New Brunswick and needed the tide-turning final two shots to escape with the win. “Escape from Alcatraz,” said Thiessen. “We weren’t on our game again and they were. We’re getting outplayed a bit but we’re not out of this yet.” 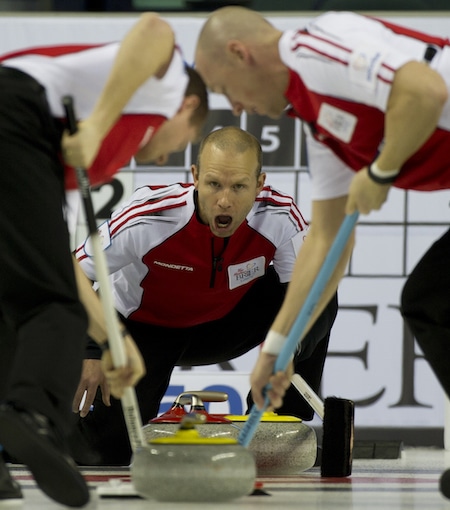 The win improved Canada to 2-2 and in a logjam with Quebec, P.E.I., and B.C. Northern Ontario is alone on top the standings at 4-0 with Newfoundland-Labrador at 3-1, Ontario and Saskatchewan 2-1. Alberta and Manitoba are 1-2, New Brunswick is 1-3 and the Territories 0-4 It was a heartbreaking loss for Mallais, third Zach Eldridge, second Chris Jeffrey, lead Jared Bezanson, alternate Jason Vaughan and coach Mark Ward. They scored deuces in the second and seventh ends and looked to have the game in hand until the final two stones. “We outplayed them. We had control throughout the game,” said Mallais who was both disappointed with the loss but impressed with the play of his team. “He just made a great shot with his last one.. “This was the game that’s we wanted. To come out strong, continue on and it was just that last end. We got one miss and it snowballed from there.” While he took the tough loss in stride, Gushue was angry and frustrated after his final stone in the 10th picked and left B.C. to count two for the win “It picked right out of my hand. Just very frustrating,” said Gushue, who is in his 12th Brier and has yet to win the event. “We probably should have won that game. To have a shot pick like that is so frustrating. As soon as it left my hand I saw the rock spin, it never had a chance. It was definitely a makeable shot.” The seventh draw goes today at 6:30 p.m. MT TSN/RDS2, the official broadcast partner of Curling Canada’s Season of Champions, will provide complete coverage of the Tim Hortons Brier, leading to the gold-medal game on March 8 at 5 p.m. The winner of the 2015 Tim Hortons Brier will represent Canada at the Ford World Men’s Championship, March 28-April 5 in Halifax, in addition to qualifying for the 2015 Home Hardware Canada Cup in Grande Prairie, Alta., the 2016 World Financial Group Continental Cup in Las Vegas and the 2016 Tim Hortons Brier in Ottawa For ticket information, go to www.curling.ca/2015brier-en/tickets/ This story will be posted in French as soon as available at https://www.curling.ca/2015brier-fr/