Laycock and his Saskatoon team of third Kirk Muyres, second Colton Flasch, lead Dallan Muyres, alternate Gerry Adam and coach Lyle Muyres escaped potential disaster in the fifth end, stole a single in the seventh then blanked the ninth to give them the critical hammer coming home. Trailing by one, the Saskatchewan crew looked in trouble until Koe’s final draw didn’t curl as much as he hoped, leaving Laycock with a shot at the double, which he made to keep alive their playoff hopes. “I knew probably at the second hog line I felt good about it,” Laycock said of his game-winning shot. “Right out of my hand I felt a little tight, which is usually good news on my outturn peels. So I felt pretty good about it halfway down the sheet.” In other Draw 15 games, Mark Kean of Ontario (Fenelon Falls) scored three in the second and went to beat Reid Carruthers of Manitoba (Winnipeg) 8-7, Jim Cotter of B.C. (Vernon) rolled past Jeremy Mallais of New Brunswick (Saint John) and Adam Casey of Prince Edward Island (Charlottetown) beat Jamie Koe of Northwest Territories 9-5. The results left Northern Ontario atop the standings at 9-1 followed by Newfoundland-Labrador at 8-2 and those teams will meet Friday in the Page 1-2 playoff game. Team Canada is at 7-3 and assured of a tiebreaker, followed by Saskatchewan at 6-3, Quebec at 6-4, B.C. at 5-5, Alberta and Manitoba at 4-5, P.E.I. at 4-6, Ontario at 3-6, New Brunswick at 2-8 and the Territories at 0-10. “What’s to say, we’ve had some good shots made against us,” said a dejected Koe, who won the event last year with a different team. “That’s just the way it has gone.” Told they’re still mathematically alive, Koe said simply: “No, that’s it.” To which third Marc Kennedy added: “If you’re in at 6-5 it’s a Hail Mary and chances are you’re not playing good enough to win anyhow so it doesn’t matter to us anymore.” There are two draws remaining and Alberta would need a lot of help to get into a tiebreaker situation. Koe, Kennedy, second Brent Laing, lead Ben Hebert, alternate Jamie King and coach John Dunn, could have put the game away in the fifth end. They were sitting as many as five counters and in the end got only one when Koe’s last-shot attempt to remove the lone Saskatchewan stone failed. “They almost got to the point where they were set up so good it was almost bad for them because there were ways we could get out of it,| said Laycock. “We got a little mistake from Kevin. If he hits even half a rock there he at least gets two, so a big break.” “That’s not why we lost the game,” said Koe. “We missed that shot but were still up two. Up two you should win most of your games.” 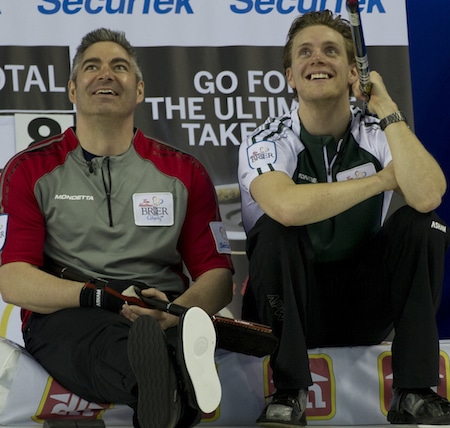 Laycock drew the button against four Alberta counters in the sixth end before he stole a key single in the seventh. He forced Koe to take one in the eighth, then blanked the ninth. “We knew our best chance was getting two coming home and that turned out to be the case,” Laycock said of the decision to blank nine. “Basically if you get a deuce your odds of winning go up about 5-10 per cent and if you get forced to one you lose 90 per cent of the time, especially against a team like Alberta the way they peel and make ticks. There are four key games in tonight’s 6:30 pm. MT draw – Team Canada (7-3) plays Northern Ontario (9-1); Newfoundland-Labrador (8-2) plays Quebec (6-), Alberta takes on Mantiboa and Saskatchewan plays Ontario TSN/RDS2, the official broadcast partner of Curling Canada’s Season of Champions, will provide complete coverage of the Tim Hortons Brier, leading to the gold-medal game on March 8 at 5 p.m. The winner of the 2015 Tim Hortons Brier will represent Canada at the Ford World Men’s Championship, March 28-April 5 in Halifax, in addition to qualifying for the 2015 Home Hardware Canada Cup in Grande Prairie, Alta., the 2016 World Financial Group Continental Cup in Las Vegas and the 2016 Tim Hortons Brier in Ottawa For ticket information, go to www.curling.ca/2015brier-en/tickets/ This story will be posted in French as soon as available at https://www.curling.ca/2015brier-fr/