Steve Laycock of Saskatchewan stole two in an extra end Sunday to beat Brad Gushue of Newfoundland-Labrador 7-5 in the bronze medal game at the Tim Hortons Brier, presented by SecurTek Monitoring Solutions.

Gushue, who suffered a heart-breaking loss in the semifinal Saturday evening, missed an attempted raise double – his only option – with his final stone, leaving Saskatchewan with the victory on Sunday at the Scotiabank Saddledome. “You come to the Brier trying to win it and it’s disappointing not to have a chance at the gold tonight,” said Laycock, who lost in Saturday’s Page 3-4 playoff game. “This is all we had left so we’re happy to have won. “We’re a professional team, once you step onto the ice it’s go-time. It was actually a fun game to be a part of. We got off to a slow start, avoided disaster in the third and we played a good second half so I was proud of the guys.” For Gushue, who was in his 12th Brier without a championship, it was still an emotional game after losing in the semifinal about 12 hours earlier. “We had a real hard time getting motivated this morning,” he said. “It was a pretty fresh wound. We came here for the championship. We didn’t get that and we just want to get home.” Gushue scored two in the first end, forced Saskatchewan to take one in the second before Laycock’s team stole two in the third when Newfoundland-Labrador looked to in position to score a bunch. Newfoundland-Labrador was counting three in a large grouping in and around the four foot. But Laycock turned it around with two shots—first a raise double that opened up the house and then an angle runback that left him sitting two. Gushue’s final shot rubbed on a centre guard. With both teams playing with lots of rock in the house, Gushue bounced back with a deuce of his own in the fourth. Saskatchewan tied it in the fifth, Gushue blanked the sixth and seventh to get the hammer coming home. He was forced to take one in the eighth but Laycock then blanked nine to regain the hammer, which he used to tie the game and force the extra end. The win earned Laycock’s team $35,000 and 30 Canadian Team Ranking points. Gushue’s foursome gets $25,000 and 20 CTRS points. Additionally, each team receives $10,000 in cresting money and $7,000 in Athlete Assistance Fund money. 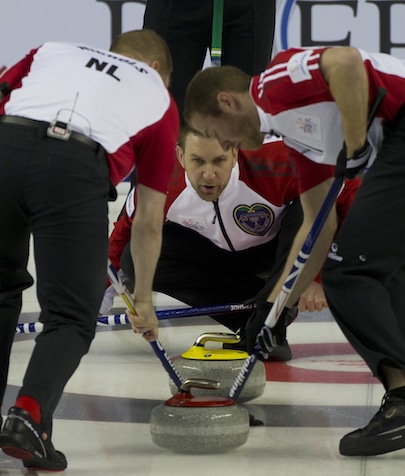