SAPPORO, Japan — It was a magnificent Monday for Team Canada at the 2015 ZEN-NOH World Women’s Curling Championship, presented by Ford of Canada. 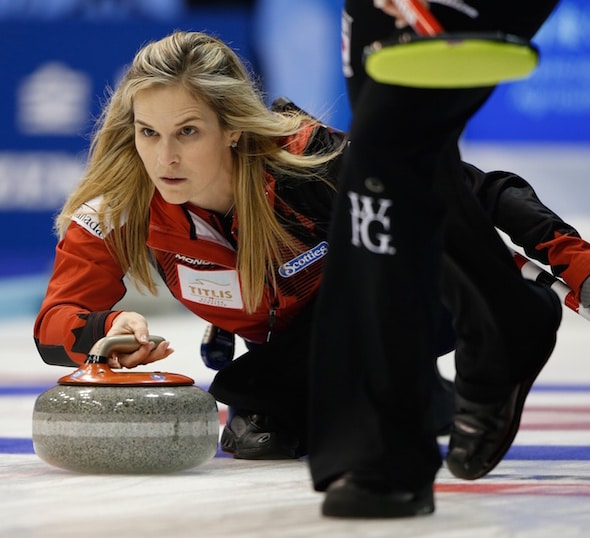 Team Canada skip Jennifer Jones made a draw to the button to beat Russia on Monday night. (Photo, WCF/Richard Gray)

Jennifer Jones’s Winnipeg team took down a pair of previously unbeaten teams on Monday at the Tsukisamu Gymnasium, capping its day with a 7-5triumph over Russia’s Anna Sidorova, following up on a 7-1 thrashing of China’s Sijia Liu in the morning draw. The result left the Canadians — third Kaitlyn Lawes, second Jill Officer, lead Dawn McEwen, alternate Jennifer Clark-Rouire, team coach Wendy Morgan and national coach Elaine Dagg-Jackson round out the team — in a four-way tie for top spot in the 12-team round-robin standings at 4-1 with the Russians, Switzerland’s Alina Pätz and the surprising Japanese team skipped by Ayumi Ogasawara (featuring a pair of Canadians, Vancouver’s Fuji Miki and Calgary’s J.D. Lind, as coaches). 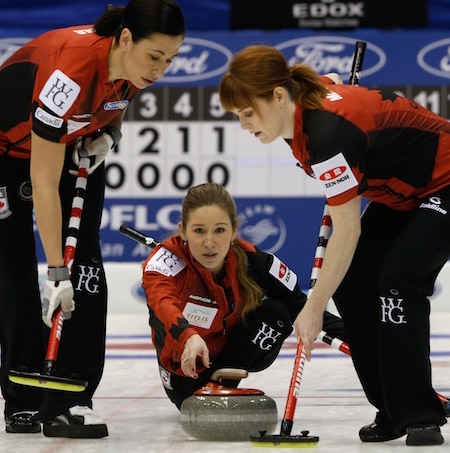 “It’s a big day for us, but what I think is more important is that we had kind of a tough loss last night (against Sweden),” said Jones. “We controlled it early and just kind of let it slip away. So to come out and pull some teams back to us and have two big wins against teams that are playing well, and to play well ourselves, gives us a ton of confidence for tomorrow.” The Canadians simply outplayed the Russians, particularly in the back end, as Jones both outcurled and out-strategized her opposite number, and finished the game off in style with a clutch draw to bite the pin and avoid going into extra ends. “That was a fun day; it felt good,” said McEwen. “We picked it up after our loss (Sunday night) to Sweden, and it feels like things are starting to fall into place. We made some shots, and Jen made a pistol there for the win, so that felt great.” Canada opened the scoring with a steal in the first, but the Russians bounced back with singles in the following two ends. The Canadians would then take control. Following a Lawes double takeout, Jones made back-to-back outturn draws to score the go-ahead deuce in the fourth, then followed with another steal in the fifth when Sidorova flashed on her attempt to blank the end. After holding Russia to a single in the sixth, Lawes made a lovely inturn draw behind cover that the Russians couldn’t remove, setting the stage for Jones to make an open hit for two to put her team up 6-3. 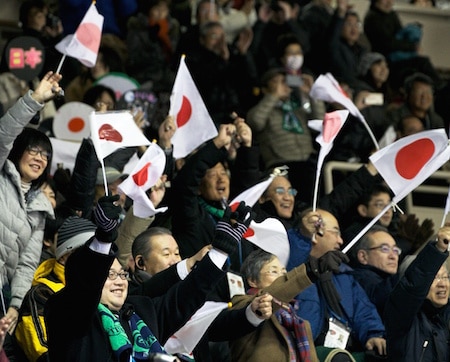 Russia would pull to within one with a pair in the ninth, but two more perfect ticks from McEwen started the 10th end, and Jones finished it with her draw to bite the pin for the victory. “We had a great day today; we made a ton of draws, a ton of big shots, and I felt really good with the speed of the ice this game,” said Jones, who has games Tuesday against Aileen Sormunen of the U.S. (0-5) and Denmark’s Lene Nielsen (1-4). “I felt like we had a lot more control. In the other games, it felt like we were chasing a lot and having to make big shots to save ends instead of big shots for extra points. That changed today and hopefully that change will stay for the res of the week.” Here is the remainder of Canada’s round-robin schedule, with the broadcast plans (all times ET; all games live on TSN network unless otherwise noted): March 17 — vs. U.S.A. (Aileen Sormunen), 1 a.m. March 17 — vs. Denmark (Lene Nielsen), 6 a.m. March 17 — vs. Norway (Kristin Moen Skaslien), 8 p.m. (TSN1/4) March 18 — vs. Switzerland (Alina Pätz), 6 a.m. March 18 — vs. Germany (Daniela Driendl), 8 p.m. (TSN1) March 19 — vs. Japan (Ayumi Ogasawara), 1 a.m. For Team Canada updates, go to www.curling.ca. Follow us on Twitter, @curlingcanada. For live scoring, standings and team lineups from the 2015 ZEN-NOH World Women’s Curling Championship, presented by Ford of Canada, go to: https://wwcc2015.curlingevents.com The French version of this story will be posted as soon as possible at https://www.curling.ca/?lang=fr