SAPPORO, Japan — Team Canada will get a much-needed day of rest before opening the playoffs at the 2015 ZEN-NOH World Women’s Curling Championship, presented by Ford of Canada. 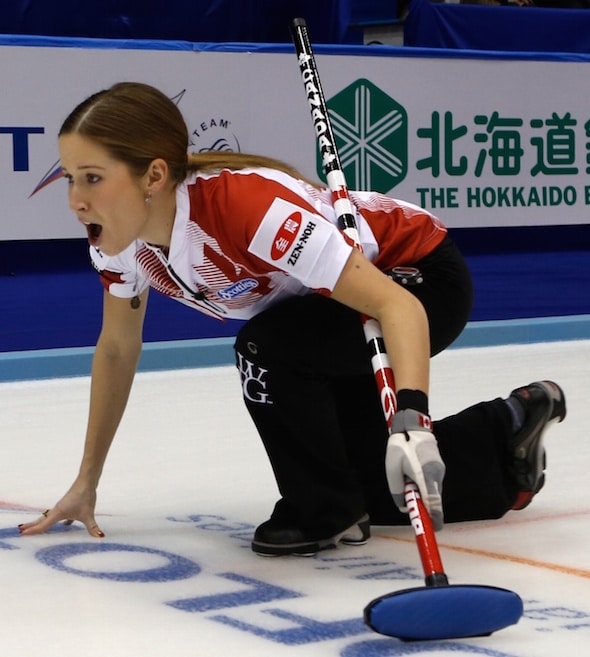 The Winnipeg-based Canadians, featuring skip Jennifer Jones, third Kaitlyn Lawes, second Jill Officer, lead Dawn McEwen, alternate Jennifer Clark-Rouire, team coach Wendy Morgan and national coach Elaine Dagg-Jackson, completed a 9-2 ride through the 12-team round-robin Thursday at the Tsujisamu Gymnasium, ending the playoff hopes of the home team with an 8-5 win over Japan’s Ayumi Ogasawara. Canada will finish second behind Switzerland’s Alina Pätz (9-1), regardless of the Swiss result later on Thursday against Sweden’s Margaretha Sigfridsson, thanks to Canada’s loss to Switzerland on Wednesday night. Canada and Switzerland will meet again Saturday morning local time (8 p.m. Friday Eastern time) in the Page playoff 1-2 game. The winner will go to Sunday’s gold-medal game at 1 a.m. ET, while the loser will drop to the semifinal Saturday at 4 a.m. against the winner of Friday’s Page playoff 3-4 game, which is scheduled for 6 a.m. ET and will be televised by TSN. 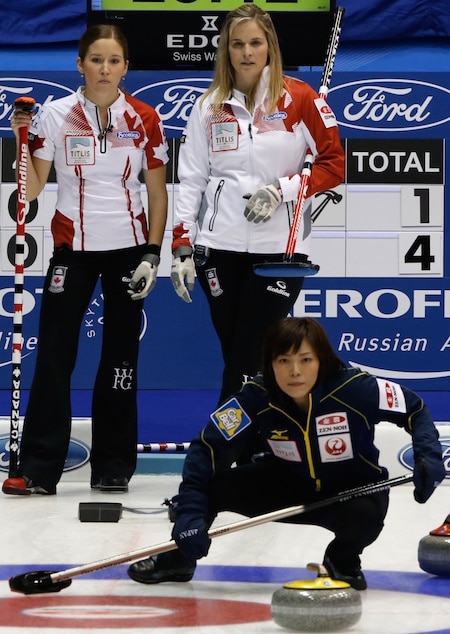 Canada will have a chance to practise on Friday before Saturday morning’s showdown with Switzerland. “The way the draw was set up, and because we have to stay at the rink all day, it makes for really long days, so it’s nice to have a break,” said Jones. “We’ll just hang out Japan — we love it here. And I love where the team is at right now. I can’t think of a better group of girls to play with — they’re making big shots and making my job easier.” The 3-4 playoff game combatants won’t be decided until the completion of Thursday’s final round-robin draw. There will be a fourth-place tiebreaker on Friday morning local time (8 p.m. ET Thursday) featuring Scotland’s Eve Muirhead (7-4) and either Anna Sidorova of Russia (7-3) or Sijia Liu of China (7-3). Russia plays China later Thursday, with the winner moving to the 3-4 game and the loser playing Scotland for the final playoff spot. Canada silenced the pro-Japan crowd early thanks to back-to-back deuces in the second and third ends. Canada would add a stolen deuce in the seventh end when Ogasawara — whose team is coached by Canadians Fuji Miki of Vancouver and J.D. Lind of Calgary — was wide and a bit heavy with her last rock. “That was a great way to finish,” said Jones. “I felt like we made some big shots when we had to, and we felt great with the draw weight. You know, it was a real grind at the end of the week with three games in a row. So I’m ready to have a couple draws off. I’m going for a massage, and then we’re going for dinner. To be honest, it’s just going to be nice to relax.” Canada hasn’t won gold at the World Women’s Championship since Jones triumphed in 2008 at Vernon, B.C. “They’re feeing great; that was a solid game, a nice way to finish, and they all played really well,” said Morgan. “We wanted to play well in that final round-robin game; that was a big goal, to be sharp, and the girls were.” For Team Canada updates, go to www.curling.ca. Follow us on Twitter, @curlingcanada. For live scoring, standings and team lineups from the 2015 ZEN-NOH World Women’s Curling Championship, presented by Ford of Canada, go to: https://wwcc2015.curlingevents.com The French version of this story will be posted as soon as possible at https://www.curling.ca/?lang=fr