A 7-5 extra-end win over Germany’s Daniela Driendl on Thursday morning at the Tsukisamu Gymnasium lifted Canada’s record to 8-2 and good enough for sole possession of second place in the 12-team round-robin standings, behind only Alina Pätz of Switzerland, who improved to 9-1 with an 8-6 win over Scotland’s Eve Muirhead. More importantly, the victory clinched a berth in the Page Playoff 1-2 game for skip Jennifer Jones, third Kaitlyn Lawes, second Jill Officer, lead Dawn McEwen, alternate Jennifer Clark-Rouire, team coach Wendy Morgan and national coach Elaine Dagg-Jackson, against the Swiss. That game will take place either Friday night or Saturday morning in Sapporo, depending on tiebreaker scenarios. “We’re really excited about that; it was our goal at the beginning of the week, to be in the one-two game,” said Jones, the last Canadian skip to win a world championship, in 2008 at Vernon, B.C. “We won’t have (first-end) hammer (due to losing to the Swiss on Wednesday night), but we’re in that game, and we feel really good with the ice conditions. We just have to be a little sharper in a couple moments, but other than that, we’re really happy with how we’re playing right now.” The win against Germany wasn’t always pretty, but the Canadians gradually turned up the pressure over the later ends and were rewarded. It started, however, in anything but perfect fashion as Driendl had a shot to score as many as four for the Germans (4-6) but instead ended up raising a Canadian rock to the button to give Canada an out-of-nowhere stolen point to open the game. “Oh, that would have been a hard one to come back from,” said  Lawes. “But we knew the ice was great this game, the speed was good. It was a little bit of a relief, and we were able to keep going and make some shots early in the game.” The Germans would bounce back and take a 3-2 lead in the fifth end with a deuce, but Canada tied it with one in the sixth and a steal of one in the seventh when Driendl’s last rock was just fractionally wide and couldn’t push a Canadian stone away from the button. The teams would then trade singles the next three ends to force extra time, and in the 11th, Canada tucked two rocks in the four-foot behind cover, and when Driendl was short on her final draw, Jones didn’t need to throw her own last rock. 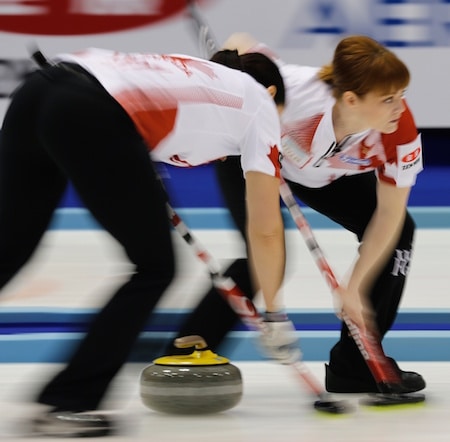 “We’re happy with the fact we’re winning close games and we’re finding a way to have a shot when we have last rock in a close game, and that gives you a ton of confidence going into the playoffs,” said Jones, whose team will finish out round-robin play Thursday afternoon against Japan’s Ayumi Ogasawara (5-4). “I thought we were really determined to win that game, and we were really patient. I could see a little fire in our eyes, that we weren’t willing to let that game slip away. We found a way to win even when things weren’t necessarily going the way we wanted them to.” Round-robin play will wrap up on Thursday, with the top four teams advancing to the Page playoffs, which see the first-and-second place teams playing for a berth in Sunday’s gold-medal game (4 a.m. ET). The loser of the one-two game drops to the semifinal (Saturday, 4 a.m. ET) against the winner of the Page 3-4 game. The semifinal loser and Page three-four loser will play for the bronze medal on Saturday at 10 p.m. ET. Here is the remainder of Canada’s round-robin schedule, with the broadcast plans (all times ET; all games live on TSN network unless otherwise noted): March 19 — vs. Japan (Ayumi Ogasawara), 1 a.m. For Team Canada updates, go to www.curling.ca. Follow us on Twitter, @curlingcanada. For live scoring, standings and team lineups from the 2015 ZEN-NOH World Women’s Curling Championship, presented by Ford of Canada, go to: https://wwcc2015.curlingevents.com The French version of this story will be posted as soon as possible at https://www.curling.ca/?lang=fr