SAPPORO, Japan — Gold once again remained tantalizingly out of reach for Team Canada at the 2015 ZEN-NOH World Women’s Curling Championship, presented by Ford of Canada. 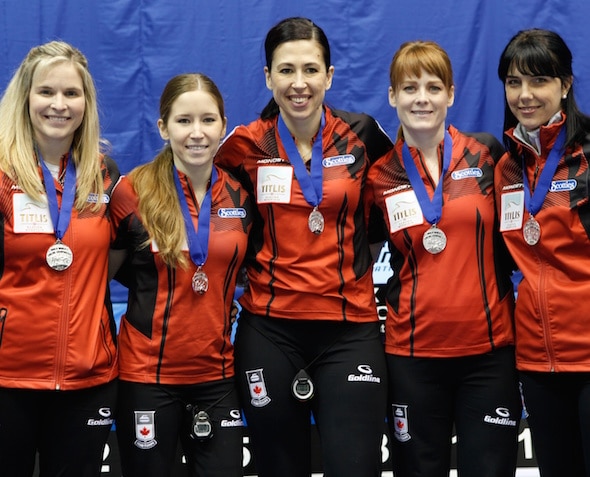 Jennifer Jones and her team from Winnipeg — third Kaitlyn Lawes, second Jill Officer, lead Dawn McEwen, alternate Jennifer Clark-Rouire, team coach Wendy Morgan and national coach Elaine Dagg-Jackson — bowed 5-3 to Switzerland’s Alina Pätz on Sunday afternoon at the Tsukisamu Gymnasium. Pätz, 25, was facing four Canadian counters when she drew to bite a piece of the button for the victory in the 10th end to stave off a furious Canadian comeback. 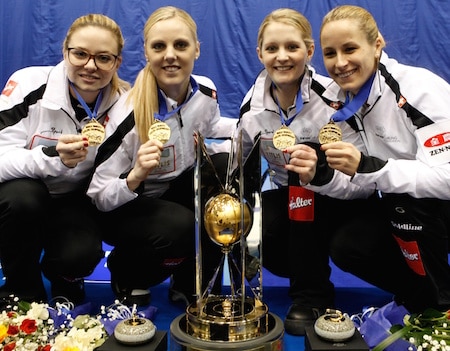 Team Canada goes home with a silver medal — the sixth straight year a Canadian team has reached the medal podium at the Women’s worlds, a streak that no other country can currently match. But it stretches Canada’s gold-medal dry spell at the Women’s Worlds to seven years, and prevented Jones and Co. from following up their Olympic victory last February in Sochi, Russia, with a World Championship gold. “We made her make a good shot for the win,” said Jones. “We kind of spotted them four points that I’d like back, but we hung in there and made a good game of it. All the power to them — she made a great draw to the button to win the world championship.” The Swiss completed a three-game sweep of the Canadians here, winning their round-robin and Page playoff encounters leading up to Sunday’s win in the final. Unless the previous two games, during which the Swiss scored first-end deuces, the Pätz team — third Nadine Lehmann, second Marisa Winkelhausen, lead Nicole Schwägli, alternate Carole Howald, coach Mirjam Ott and national coach Al Moore — started tentatively. After a blanked first, Pätz had a rare miss in the second when she was heavy on a draw to the four-foot for two and had to settle for a single. But Jones returned the favour in the third when she was wide with her last-rock takeout, resulting in a rollout and a stolen point for Switzerland. 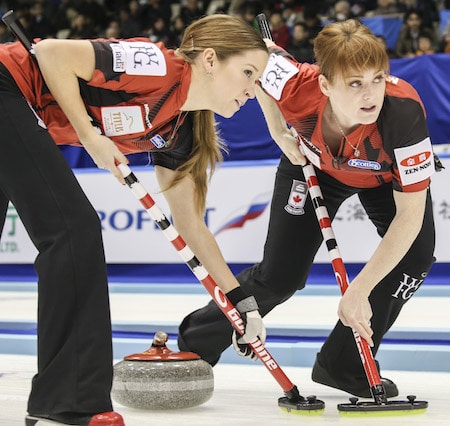 “I wish we could start the game over again, but that’s just not the way the game goes,” said Jones. “We left it all on the ice, and I couldn’t really ask for ourselves to do anything more than that. We did push them, and I’m proud of the girls for that.” The Canadians would blank the next two ends and then went hard for the deuce in the sixth. But Lawes was light and tight with a come-around attempt and the Swiss were able to put two rocks into the top four. Jones elected to draw the four-foot and was heavy, resulting in a stolen deuce for Switzerland. Canada would finally hit the scoreboard with two in the seventh end, and then would pull off a steal in the ninth to cut the margin to one, and had all sorts of pressure on the Swiss in the 10th. But Pätz — like Lehmann a former World Mixed Doubles champion —  responded magnificently with her draw for the victory. “It’s a really, really great feeling,” she said. “It’s just awesome, I don’t know what to say…so good. I don’t think my family and friends back home will believe it, like me. This is our first time here and it’s just amazing.” For Switzerland it was a third gold medal in four years, following the victories by Ott in 2012 at Lethbridge, Alta., (with Pätz as the alternate) and Binia Feltscher last year in Saint John, N.B. It was Switzerland’s fifth gold medal overall. “I don’t think there is any secret ingredient,” said Pätz. “I think we have a lot of good teams in Switzerland and that helps all the other teams to become better.” Earlier on Sunday, Russia’s Anna Sidorova claimed a bronze medal at the Women’s Worlds for the second straight year, cruising to a 13-4 win over 2013 world champ Eve Muirhead of Scotland. The Russians scored five in the first end and never looked back. Finnish skip Sanna Puustinen was named winner of the player-voted Frances Brodie award for sportsmanship. Tickets for the 2016 Ford World Women’s Curling Championship, presented by Meridian Manufacturing, March 19 to 27 in Swift Current, Sask., are available at www.curling.ca/2016worldwomen/tickets/ The 2015 Ford World Men’s Championship gets underway on Saturday at the Scotiabank Centre in Halifax. The French version of this story will be posted as soon as possible at https://www.curling.ca/?lang=fr