There will be a coast-to-coast feel to Team Canada for the curling competition at the 2016 Youth Winter Olympics, it was announced today by Curling Canada. 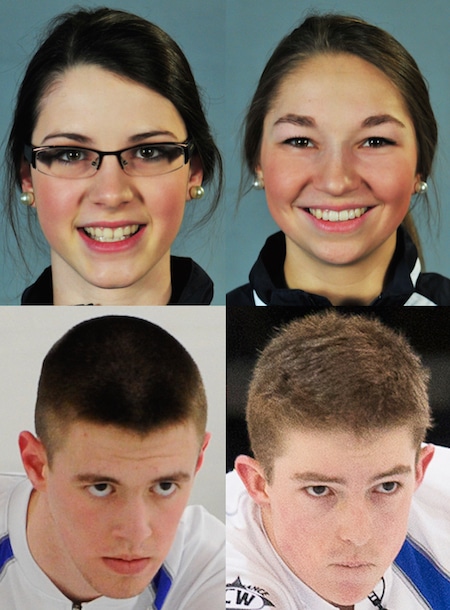 Two players from British Columbia — Tyler Tardi of Surrey and Sterling Middleton of Fort St. John — and two more from Nova Scotia — Mary Fay of Chester and Karlee Burgess of Brookfield — will comprise Team Canada at the second Youth Winter Olympics, which will run Feb. 12-21 at Lillehammer, Norway. Applications were accepted from all age-eligible players in Canada (players must be born between Jan. 1, 1998, and Dec. 31, 2001), with a special focus on participants in the 2015 Canada Winter Games in Prince George, B.C. The determining criteria for selection to Team Canada were curling skill, community leadership and academic achievement. “The quality of applications we received through this process was simply amazing, and it bodes well for the future of our sport in Canada,” said Curling Canada Chief Executive Officer Greg Stremlaw. “I know Tyler, Sterling, Mary and Karlee will wear the Maple Leaf proudly in Lillehammer, and we’re confident that they’ll be wonderful representatives, both on and off the ice.” The positions the players will fill in Lillehammer will be set at a later date in consultation with team coach Helen Radford. All four players were medallists at the Canada Winter Games. Fay skipped Team Nova Scotia, with Burgess playing second, to a silver medal in Prince George, while the tandem of Tardi at skip and Middleton at third came home from Prince George with a bronze medal. As well, Fay and Burgess won a bronze medal at the 2014 M&M Meat Shops Canadian Junior Championships in Liverpool, N.S., and finished fourth at this season’s Canadian Juniors in Corner Brook, N.L. Tardi, meanwhile, is a two-time B.C. mixed doubles champion, having competed at the 2013 and 2015 Canadian Mixed Doubles Trials. Team Canada will be looking to build on the bronze-medal finish of Thomas Scoffin, Corryn Brown, Derek Oryniak and Emily Grey at the inaugural Youth Winter Olympics, in 2012 in Innsbruck, Austria. The 2016 edition will follow the same format — the four-player mixed teams will play off for gold, silver and bronze, followed by the mixed doubles competition, which will see each country’s teams split up to form international combinations, also playing for medals. For more information about the Youth Olympics, click here.