Tour season kicking off in Oakville

It’s 30 degrees, and sunny… it must be curling season. As top teams from around the world land in Toronto for the World Curling Tour Stu Sells Oakville Tankard, they might be wishing they’d brought their golf clubs instead of curling brooms. This week in the GTA has seen the highest temperatures of the summer, which makes it hard to believe the curling season is about to kick off. 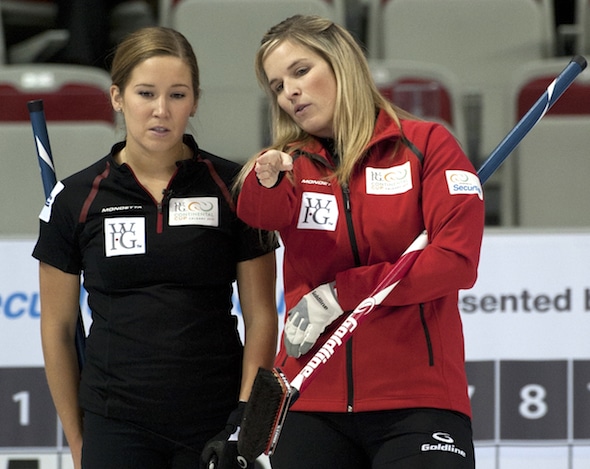 Jennifer Jones, right, and third Kaitlyn Lawes are kicking off their 2015-16 season this weekend at the Stu Sells Tankard in Oakville, Ont. (Photo, Curling Canada/Michael Burns)

But, kicking off it is — 32 women’s and 28 men’s teams are descending on Oakville, Ont., where they’ll be fighting over purses of $30,400 and $27,200 respectively, and there aren’t a lot of easy games in the draw. On the women’s side, the top four teams from the Canadian Team Ranking System are playing. Jennifer Jones (Winnipeg), Val Sweeting (Edmonton), Rachel Homan (Ottawa) and Sherry Middaugh (Coldwater, Ont.) are all suiting up for their first event of the year. Throw several high-level international teams into the mix, such as reigning world champion Alina Pätz (Switzerland), defending Stu Sells champ Silvana Tirinzoni (Switzerland) and two-time world bronze-medallist Anna Sidorova (Russia), and the field becomes that much stronger. And that’s before you consider Chelsea Carey, Stefanie Lawton, Julie Hastings, Tracy Fleury (Horgan), Alli Flaxey, Lauren Mann, or any of the other skips who’ve made their way to the Scotties in the past. Needless to say, the field is stacked. By comparison, the men’s side is solid, but perhaps not quite as potent. Notably, the last two defending champions of the event (who also happen to be ranked #1 and #2 in the CTRS rankings) are lacking from the draw, choosing to start their season at next week’s Grand Slam event in Paradise, N.L. 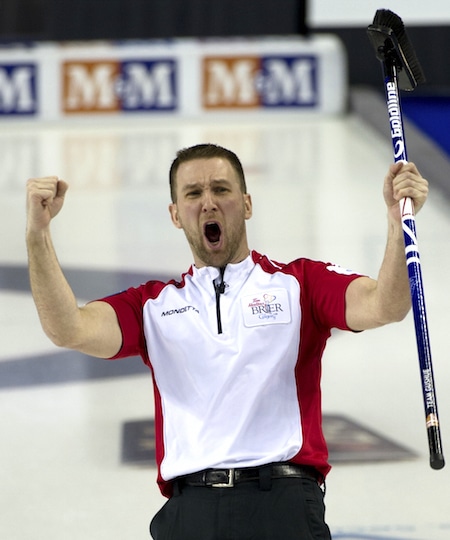 Brad Gushue is looking to build on his No. 3 ranking on the Canadian Team Ranking System. (Photo, Curling Canada/Michael Burns)

Mike McEwen (Winnipeg) started his phenomenal season last year with a win at the Oakville Stu Sells, and Brad Jacobs (Sault Ste. Marie, Ont.) took home the trophy the two years before that. Neither of them is playing this weekend, which is good news for the 28 teams that did register. Even without the top two, there’s still plenty of firepower. Brad Gushue (St. John’s) sits at #3 on the CTRS, and starts his season in Oakville. Saskatoon’s Steve Laycock and Calgary’s Kevin Koe are #4 and #5, and will also be in the draw. Then, consider the success of Winnipeg’s Reid Carruthers (CTRS #6) and Summerside, P.E.I.’s Adam Casey. Both skips took brand new teams out on tour last year and ended up finding themselves in the thick of things at the Tim Hortons Brier. They’re both looking to build on last season’s success, starting this weekend at the Oakville Curling Club — which, incidentally is where CTRS #7 skip John Epping curled as a junior. He’ll also be in the mix. And like the women, the men will also have some international competition. Sweden’s Niklas Edin and Scotland’s David Murdoch, both two-time world champions, have made the trip overseas following last week’s event in Baden, Switzerland (which Edin won). So there will be plenty of top-tier competition, and whoever wins, men’s or women’s, will take home a well-deserved chunk of cash, and valuable CTRS points to start the 2015-2016 season.