The sliders have barely cooled from the Stu Sells Tankard in Oakville, Ont., and already another event is underway. 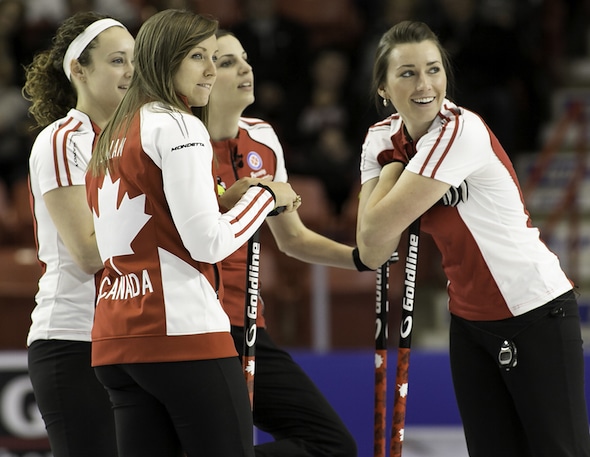 One day after Brad Gushue (St. John’s) and Rachel Homan (Ottawa) bested their respective star-studded fields, they’re set to kick off a new event; The Pinty’s Grand Slam of Curling Tour Challenge in Paradise, N.L. Just hours after the Stu Sells Tankard final, in which Gushue beat Winnipeg’s Reid Carruthers, and Homan took down world champ Alina Pätz of Switzerland, several teams were waiting at Toronto’s Pearson Airport for the same flights to St. John’s. Gushue ended up with $8,000 and 51.982 points on the Canadian Team Ranking System, while Carruthers took home 40.843 CTRS points and $4,000. As fate would have it, Carruthers will have a chance for some immediate revenge as his Tuesday night matchup is with Gushue, who will no doubt be the local favourite. Homan, on the other hand, gets a day to recover and will start Wednesday morning against Toronto’s Julie Hastings. Coming off a dominant performance in Oakville, where her team earned 56.517 CTRS points and $9,000, Team Homan will be looking to extend its season-opening winning streak past seven games. Of course, with a field featuring every Top 10 team in the world, that might be tough to do. Although most of them were present in Oakville, the Paradise Grand Slam will also include recent world champions Eve Muirhead (Scotland) and Binia Feltscher (Switzerland). And the men’s field will be beefed up as well. Mike McEwen (Winnipeg) and Brad Jacobs (Sault Ste. Marie, Ont.) both opted to skip the Oakville event and will be starting their season this week in Newfoundland. In a new twist, Paradise is also holding a “Tier 2” Grand Slam event. In an effort to create opportunities for teams outside the Top 15 on the Order of Merit, this event has an emphasis on giving lesser-known teams a chance to qualify for a following Grand Slam event. Although Mark Kean (Stoney Creek, Ont.) and Greg Balsdon (Kingston, Ont.) have both played in the Tim Hortons Brier and in other Slams, they are in Paradise’s Tier 2, trying to play their way into the next one. Jim Cotter (Vernon, B.C.) and Scotland’s Tom Brewster will also be in the Tier 2 event. The women’s Tier 2 also features some big recognizable names, starting with newly inducted Curling Canada Hall of Famer Mary-Anne Arsenault (Halifax). Also included will be Heather Strong (St. John’s), Kerri Einarson (Winnipeg), Jill Thurston (Winnipeg), two U.S. teams skipped by Jamie Sinclair and Nina Roth, and two Swedish teams skipped by Cissi Östlund and Anna Hasselborg (who incidentally, is coming off a quarter-final finish in Oakville).