It’s no secret that the Canadian women’s bonspiel circuit has been dominated by three teams in recent years. Winnipeg’s Jennifer Jones and Ottawa’s Rachel Homan have been winning for ages, while Edmonton’s Val Sweeting’s foursome has come on strong in the last year. Given their continued dominance, they haven’t left a lot of room at the top for the rest of the ladies teams. 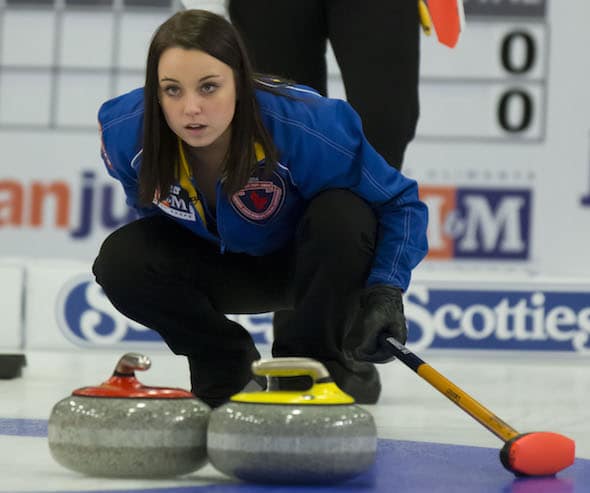 This weekend, however, the Big Three aren’t playing. So, there’s an opportunity for a lot of teams to push themselves up the Canadian Team Ranking System leaderboard, and several teams have an opportunity to move into a top-five spot in the national rankings. Which brings us to the Prestige Hotels & Resorts Curling Classic in Vernon, B.C. Several top women’s teams are fighting through the 32-team field, battling for their share of $37,000 and some much needed CTRS points. Currently, the difference between second place and 20th could easily be made up in a bonspiel or two. The field features CTRS No. 5 Kerri Einarson (Winnipeg), No. 6 Kelsey Rocque (Edmonton), No. 12 Jill Thurston (Winnipeg),  No. 13 Stefanie Lawton (Saskatoon) and No. 16 Chelsea Carey (Calgary). A win by any of those teams would catapult them to the top of the Canadian standings. It also features the return of Calgary’s Cheryl Bernard and her 2010 Olympic silver-medal team. The CTRS standings are used to determine invitations for future editions of the Home Hardware Canada Cup. The 2015 edition is coming up in December in Grande Prairie, Alta. Points are also counted on the World Curling Tour Order of Merit, which includes all international teams, and determines invites to the Grand Slam of Curling events. It is safe to say that the CTRS Top 10 will look quite different come Monday. Meanwhile, across the pond in Switzerland, two Canadian men’s teams are chasing points on the European Champions Tour. Current CTRS leader Brad Gushue (St. John’s) is one of the favourites in the Basel Swiss Cup. The 40-team event features a purse of more than $57,000 Cdn and includes a field of top-tier skips including fellow Canadian Adam Casey (Summerside, P.E.I.). Also in the mix are Norway’s Thomas Ulsrud, Scotland’s David Murdoch, and Switzerland’s Sven Michel. With a field of world, national, and Olympic champs, a good finish in Basel would gain either Gushue or Casey a pile of points on the CTRS. Gushue would extend his first-place lead, while Casey would get himself back into the mix with his first major score of the season.