Everybody knew going into the weekend in Vernon, B.C., that the Canadian Team Ranking System women’s standings would look quite different by the time the last rock was thrown. 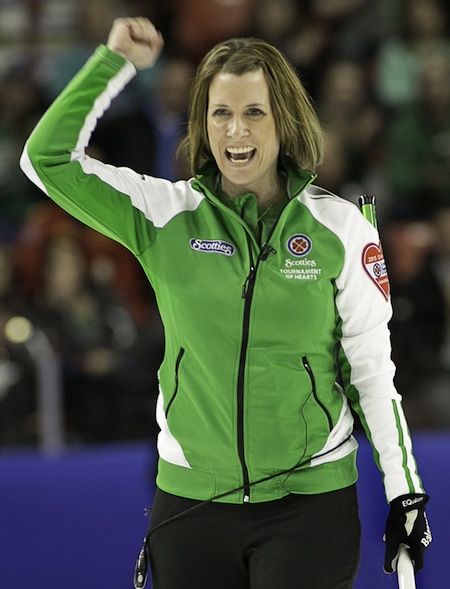 Stefanie Lawton and her team from Saskatoon won a World Curling Tour event on the weekend in Vernon, B.C. (Photo, Curling Canada/Andrew Klaver)

While Rachel Homan (Ottawa) was alone in first place by a long shot, every other team was within a few points of each other for rankings ranging from third all the way down to 15. With many of these teams in action at the Prestige Hotels & Resorts Curling Classic, there was bound to be some movement. Saskatoon’s Stefanie Lawton took home the championship, and the most points. The $8,000 win also came with 49.412 points, which launches her team of Trish Paulsen, Sherri Singler and Marliese Kasner from 13th place to fourth on the Canadian Team Ranking System rankings. Lawton defeated Calgary’s Chelsea Carey in the final; the losing side earned $6,000 and 38.823 points. This pushed Carey’s squad from 15th place into fifth. Oddly, the big winners on the weekend may have been the semifinal losers. Both Kerri Einarson (Winnipeg) and Kelsey Rocque (Edmonton) failed to reach the final, but gained enough points (30.00) for their co-third place finish that they moved into second and third, respectively, on the CTRS. Aside from the boost to the rankings, each of those teams also took home $4,000. Next weekend, all the top teams (including Homan, Winnipeg’s Jennifer Jones, and Edmonton’s Val Sweeting — none of whom played in Vernon) will be participating in the Curler’s Corner Autumn Gold Curling Classic in Calgary. It is safe to say the standings will see another shakeup a week from now. The men’s CTRS rankings, however, saw very little change this week. The only thing that was different following the weekend’s activity was that Brad Gushue (St. John’s) and his team of Mark Nichols, Brett Gallant and Geoff Walker extended their CTRS lead by winning the Basel Swiss Cup in Switzerland. For Gushue and team, it was their third event win in four tries, and they were the runner-up in the fourth. Another 52.845 points for the Basel win makes his lead over second-place Reid Carruthers (Winnipeg) more than 100 points. Gushue also took home aproximately $18,950 for beating Jaap Van Dorp (Netherlands) in the final. The most surprising thing about the results in Switzerland was about who didn’t make the playoffs. Top international teams such as Thomas Ulsrud (Norway), David Murdoch (Scotland) and Thomas Brewster (Scotland) all failed to make it through the triple-knockout qualifying. It was also a disappointing result for Adam Casey (Summerside, P.E.I.), who failed to qualify after winning his first two games.