Big-game tension goes hand in hand with baseball and curling

By Nolan Thiessen In our current social media age there is a tendency to overstate current events as “unprecedented” or “the best ever.” That said, I don’t think it’s an overstatement to say that I can’t remember a time when the Blue Jays have captured the imagination of Canada quite like they have since their flurry of trades in late July. Canadian baseball fandom was never at the heights it is at today, even when the WAMCO Jays were destroying MLB in 1993. 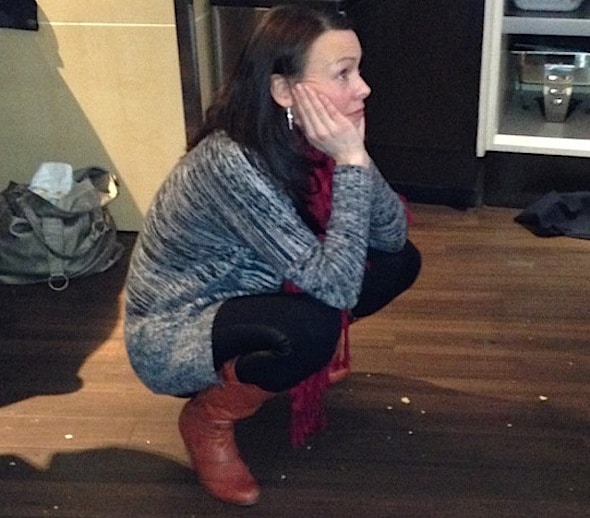 For many fans, this will be their first taste of playoff baseball. Twenty-two years out of the playoff picture has created a generation of Blue Jays fans who don’t quite know what it’s like to watch a playoff baseball game and all that it entails. Sometimes you get the feeling that you might throw up your supper. Sometimes your hands are sweating for no apparent reason. There are highs and lows throughout October that most sports cannot match. Please don’t close this browser as soon as you read this paragraph, but, full disclosure, I am a Red Sox fan first and foremost. The Jays are not a hated rival in my books as they do fall into the category of my second favourite team … the team that is trying to stop the Yankees from winning a World title. So I am pulling for the Jays this month — I am a baseball fan first and love seeing the baseball fever that has struck this country. That fever will continue to ratchet up with every Jays victory during their run for glory so I am behind that. Baseball by nature is a slow game with extended periods of downtime — not unlike the chess game on ice that is curling. I think that methodical pace adds to the stress for all fans and viewers during the big games. Each pitch in every MLB postseason game provides the possibility of turning your dreams into reality or spinning them into a nightmare. As a TV product, it allows directors the chance for tight camera shots of fans and relatives in the stands, stress etched across all their faces. You can almost see their hearts pounding out of their chest from the tension. It reminds me of the feeling watching Tim Hortons Brier finals on TV — there’s so much at stake for the players on the ice while the tension builds as the game stays close. Every time our team has had the chance to get to the playoff weekend, the TV crews innocently ask us where our wives and kids are sitting in the arena because they want to show their reactions to big shots, good and bad. It makes for better viewing when you see the anguish on the supporters’ faces. This postseason you will see those tight camera angles at Rogers Centre with Blue Jays fans. They will almost feel what it’s like to be our families sitting in the stands during the Tim Hortons Brier final, hoping for just one more win while being helpless to do anything about it. 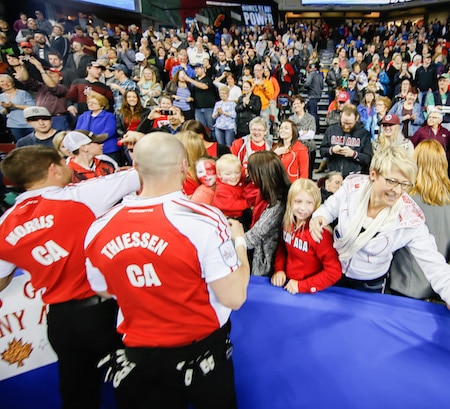 I remember the feeling of watching intense Brier finals even before my time in the elite side of our sport. I had no vested interest in the outcome; however I felt the anxiety watching games such as the Stoughton v. Martin ’96 extra-end final, and the ’97 Vic Peters v. Kevin Martin heavyweight battle where momentum seemed to change shot by shot. I even remember seeing the look on Deb Peters’ face when Vic rolled out his hit for the win in ’92 that sent the game to an extra end. The intensity seems to flow out of the TV into your living room when you can tell that the players have so much invested in the outcome of these few games. They have put in all of the hard work for so many years and this is the moment when they want it to all pay off. Those friends, families and fans know that. They know legacies on the line with every moment of a game. I was told by my wife after our final this past March that our squad might have taken a few years off of her life. After our extra-end win in 2010 she didn’t think it could get much worse; however, 2015 might have topped it. The stress of watching us compete in the Tim Hortons Brier final, everything coming down to Pat’s last draw, was just too much at some points and she had to look away. So get excited Blue Jay fans, this is what you have to look forward to. The playoffs start this week and you are going feel adrenaline and anxiety, the likes of which you maybe haven’t felt before. But that is the beauty of sports, sometimes at the end of all that adrenaline and anxiety is a payoff that makes it all worth it. (Nolan Thiessen throws lead rocks for Team Canada, which will compete this season at the Home Hardware Canada Cup Dec. 2-6 in Grande Prairie, Alta.; the World Financial Group Continental Cup Jan. 14-17 in Las Vegas; and the Tim Hortons Brier, March 5-13 in Ottawa. As for his baseball cred? He played college ball in the U.S. as a pitcher and still suits up in the summer and fools hitters with a variety of junk)