When the world’s best curling teams all play each other in a major competition, it’s anything but guaranteed that the No. 1 seeds will win the event. Sure, it happens, but it’s just as likely that a No. 2, 3 or a 6 could get hot that weekend, and knock off the top squad en route to a championship. 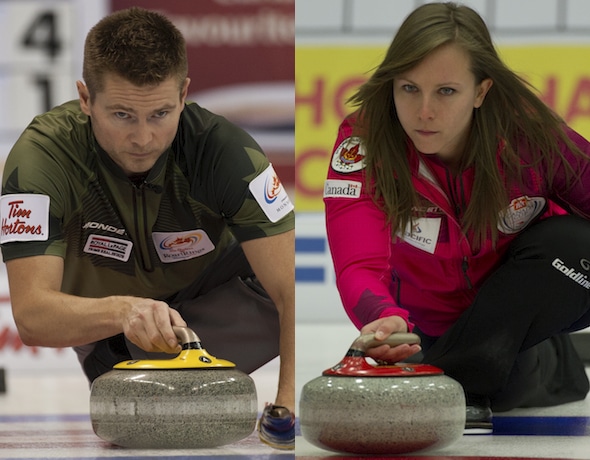 This weekend, however, that’s exactly what happened at the Grand Slam Masters of Curling event in Truro, N.S. World men’s No. 1 Mike McEwen (Winnipeg) and world women’s No. 1 Rachel Homan (Ottawa) each took home the titles, earning $24,500 and $26,000 respectively.

Homan, with Emma Miskew, Joanne Courtney and Lisa Weagle, ran the table without losing a game; finishing with a convincing win over Edmonton’s Val Sweeting. McEwen (with B.J. Neufeld, Matt Wozniak, and Denni Neufeld)  won his first three in the round robin, but lost to Calgary’s Kevin Koe in his fourth game, then ran through the playoffs unblemished.

McEwen extended his World Curling Tour Order of Merit lead, which is based on two seasons worth of results. He still trails Brad Gushue (St. John’s) in the single season Canadian Team Ranking System standings. 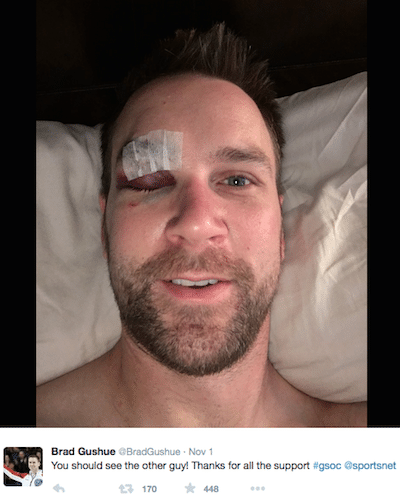 Gushue, meanwhile, endured what might be the most talked-about curling moment of the year. After he ran through the round-robin undefeated, he met Saskatoon’s Steve Laycock in the quarter-finals. In the fourth end, while stepping out of the way of some moving stones, Gushue slipped, and fell face-first into the ice, without getting his hands up to break his fall.

Immediately, blood was visible on the ice, and paramedics rushed to his aid. After heading to a nearby hospital (apparently across the road from the arena), Gushue was able to return in the 7th end, sporting a black eye, and some stitches above his right eye. Despite his toughness, he was unable to rally his troops, and lost to Laycock 5-2.

He later posted a picture on Facebook and Twitter which showed the shiner had gotten worse, and the swelling around the stitches had nearly closed his eye. “You should see the other guy,” he quipped.

— Sarnia, Ont.’s Mark Bice reached his second WCT final in two weeks. After losing the championship last week in Gatineau, Que., to Gushue, Bice found himself in the final at the Huron Reprographics Oil Heritage Classic. He eventually fell to the U.S.’s John Shuster. Bice took home $4,200 and 27.052 points, while Shuster claimed the $6,600 prize.