While most club curlers across the country are finally settling into their leagues, maybe with two or three weeks under their belts, the World Curling Tour enters its 12th week. Since the Baden Masters in August, many of Canada’s top teams have been busy nearly every weekend in bonspiels from one coast to the other. 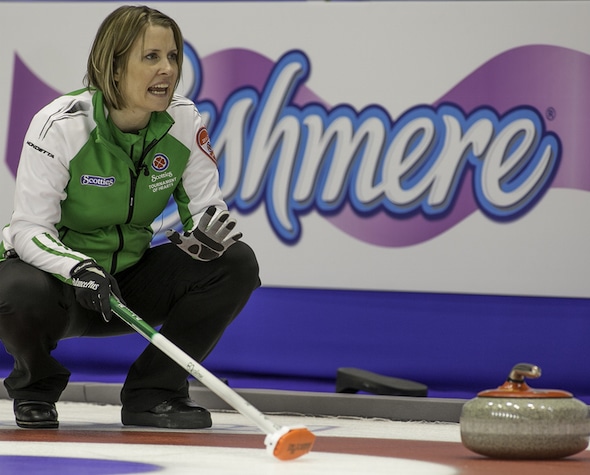 Stefanie Lawton Saskatoon will be looking for her sixth title at her hometown stop on the World Curling Tour. (Photo, Curling Canada/Andrew Klaver)

And with another Grand Slam event next week, another mixed doubles bonspiel (the Wall Grain Mixed Doubles Classic) immediately after, and the Home Hardware Canada Cup only a couple weeks away after that, many of the world’s top teams are using this weekend as an opportunity to spend some time at home, do laundry, and rest. Then, the whirlwind schedule resumes on Monday, as most teams will fly to Oshawa, Ont., for the Grand Slam’s National event. Of course, not everybody is sitting still this weekend. There are still a number of WCT events on the calendar, and many teams vying for valuable points on the Canadian Team Ranking System. The biggest women’s event this weekend is in Saskatoon. At the Colonial Square Ladies Classic, 32 teams are fighting through a triple-knockout bracket for a share of $50,000. Calgary’s Chelsea Carey looks to move up the CTRS leaderboard with a strong finish, as does Caledon, Ont.’s Allison Flaxey, Kelowna, B.C.’s Kelly Scott, and hometown star Stefanie Lawton. There’s a notable international presence too, including two Swiss teams (one of which is reigning World Champion Alina Pätz), five American teams, and a Scottish entry. Lawton has won this event five times, and with only two of the world’s top 15 teams in the field, she’ll have a good chance of making it six. Across the country in Kemptville, Ont., 24 other women’s teams are playing their own ‘spiel for $17,500. The Royal LePage OVCA Women’s Fall Classic features many of Ontario’s top teams as well as some out-of-province squads and some impressive international talent. World No. 6 Silvana Tirinzoni (Switzterland) is the highest-ranked entry but Scotties Tournament of Hearts veterans such as Mary-Anne Arsenault (Halifax), Marie-France Larouche (Levis, Que.) and Julie Hastings (Thornhill, Ont.) will give them a run for their money. Toronto’s Cathy Auld won the event last year, and is also in the mix. On the men’s side, the CookstownCash presented by Comco Canada Inc., features 30 teams competing for $22,500 in prize money. Toronto’s John Epping and Summerside, P.E.I.’s Adam Casey both look to get back on track after slow starts to the season. Also in the mix are former Tim Hortons Brier skips Greg Balsdon (Kingston, Ont.), Mark Kean (Stoney Creek, Ont.), Mike Harris (Toronto), and Jamie Murphy (Halifax). Sarnia, Ont.’s Mark Bice looks for a third straight week in the finals after runner-up finishes in Gatineau, Que., and Sarnia.