Jones and Jacobs teams picking up the pace in Oshawa

Since winning gold medals at the 2014 Olympics in Sochi, Jennifer Jones and Brad Jacobs have been anything but quiet. 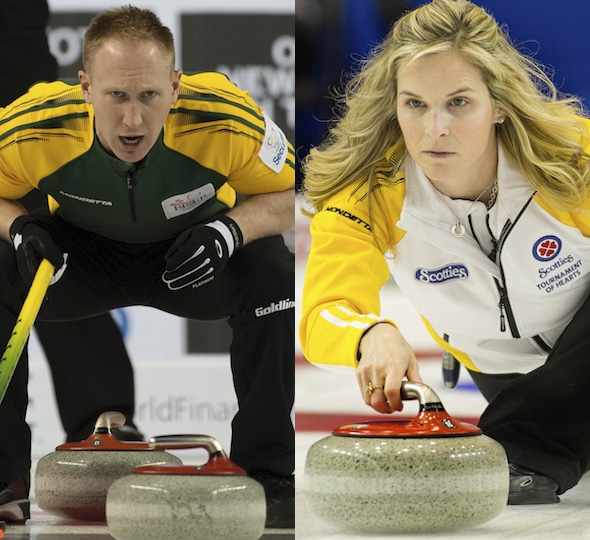 Brad Jacobs, left, and Jennifer Jones have their teams off to a solid start at the Pinty’s Grand Slam National in Oshawa, Ont. (Photos, Curling Canada)

Aside from being ambassadors, guest speakers and spokespeople, they still managed to put up impressive results on the ice. Jones (Winnipeg) won the 2015 Scotties Tournament of Hearts, while Jacobs (Sault Ste. Marie, Ont.) finished second to Calgary’s Pat Simmons and John Morris at the Tim Hortons Brier, but went on to win the final Grand Slam Event of the Season; the Players’ Championship in Toronto. The start of the 2015-2016 season, however, has not been up to their recently-dominant levels. Jones, with Kaitlyn Lawes and Jill Officer, posted adequate results with a series of spares while Dawn McEwen spent the first months of the season at home with her new baby. Jacobs (with Ryan Fry, E.J. Harnden and Ryan Harnden), meanwhile, qualified for playoffs in several events, but never made it past the semifinals. As a result, both of them find themselves a little farther down the Canadian Team Ranking System leaderboard than they’re used to. Jacobs, who has spent the last few seasons battling with Mike McEwen for the No. 1 spot, currently sits in fifth. Jones, who usually sits at (or near) the top of the list, is in sixth. The two superstar squads are in Oshawa, Ont., this week, playing in the latest Pinty’s Grand Slam of Curling event. The National features 15 of the best men’s and women’s teams, each side fighting for a share of $100,000 and valuable points. And so far, it’s going well for Jones and Jacobs. Jacobs started his weekend with a dominant 9-1 win over Switzerland’s Sven Michel, and followed it up with another convincing victory over reigning world champ Niklas Edin of Sweden. He faces Edmonton’s Brenden Bottcher on Thursday afternoon, and finishes the pool round robin with Simmons. A win in either game should qualify them for playoffs. Jones also started the bonspiel with two wins; first over Toronto’s Julie Hastings and then South Korea’s Eun Jung Kim (getting a measure of revenge after Kim beat Jones in the final of the Canad Inns Women’s Classic last month in Portage la Prairie, Man.). The team seems more comfortable now that McEwen has rejoined the squad, and a win over Sherry Middaugh (Coldwater, Ont.) or Tracy Fleury (Sudbury, Ont.) will push them through. Ottawa’s Rachel Homan continues her red hot season, starting her week with three wins. Edmonton’s Val Sweeting is also 2-0, and currently sits second to Homan on the CTRS ranking. Toronto’s John Epping started with two wins. A good result here would help get his season on track. He sits at No. 19 on the CTRS leaderboard.