The Grand Slam of Curling may have left the General Motors Centre in Oshawa, Ont., but there wasn’t the usual mad dash to Pearson Airport on Sunday night. Instead of flying home, many of the game’s top players are taking part in the Wall Grain Mixed Doubles Classic at the Oshawa Curling Club. 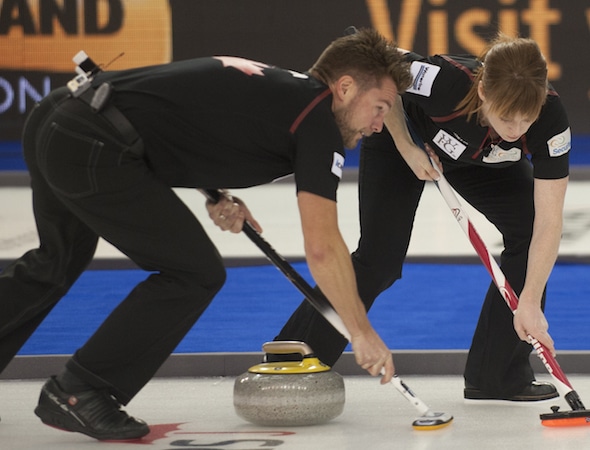 Mike and Dawn McEwen are teaming up this week at the Wall Grain Mixed Doubles Classic in Oshawa, Ont. (Photo, Curling Canada/Michael Burns)

The second event of its kind, the Oshawa event aims to raise the profile of mixed doubles, format that will be part of the next Winter Olympic games. Aside from $23,000 in prize money, the winning duo will also gain Curling Canada funding to help raise the level of competition in this country leading up to the team selection for the debut of Winter Olympics mixed doubles curling in 2018 at PyeongChang, South Korea. “Well, it’s a great field (in Oshawa), and you always know that when you’re constantly getting questions from the players wondering why they’re in the toughest pool,” said Jeff Stoughton, Curling Canada’s mixed doubles program manager. “But that’s a good thing. We want to keep ramping up the competitiveness and skill level in mixed doubles, and the Wall Grain Classic is another step in the right direction.” For curling fans, the most interesting part may be who ends up playing together. In some cases, the choices are obvious. Jennifer Jones, a gold-medallist in the traditional discipline,will be pairing up with her husband Brent Laing. Dawn McEwen, Jones’s lead will also be playing with her husband, Mike. In other cases, high-profile players from across the country are teaming up. Edmonton’s Val Sweeting is playing with Brad Gushue (St. John’s). Ottawa’s Rachel Homan is playing with Ottawa-native John Morris (now living in Calgary), now the vice of the reigning Tim Hortons Brier champion squad. In fact, Homan and Morris combined to win the Canad Inns mixed doubles bonspiel earlier this season in Portage la Prairie, Man., beating Jones and Laing in the final. “Playing with Brent in Portage was a wonderful experience, and we learned a lot along the way,” said Jones. “I really love the format, and having all the rocks in play. It’s definitely challenging, but I think more and more of the top players are really embracing it and I’m excited to see what’s going to happen in the Oshawa event.” Although it’s a fairly young sport, “established” teams are also represented.  Calgary’s Kalynn Park and Charley Thomas, last years Canadian champions, will participate, as will Kim and Wayne Tuck of Ilderton, Ont., the winners of the previous year. The competition will feature four pools of five teams, with the new mixed doubles rules in place: notably, the “power play” option (each team can use it once with hammer), in which the pre-placed rocks are on the edge of the eight-foot circle (guard and in the rings) instead of the centre line. Also, there is also no longer a requirement for a player to act as skip, holding the broom. For standings, linescores and the schedule for the Wall Grain Mixed Doubles Classic, click here Gushue and Homan, of course, will be coming off victories with their four-player teams in Sunday’s finals of the Pinty’s Grand Slam National in Oshawa that padded their already significant leads in the Canadian Team Ranking System standings. Gushue, backed up by third Mark Nichols, second Brett Gallant and lead Geoff Walker, was a 7-2 winner over Winnipeg’s Reid Carruthers in the men’s final. In the women’s final, Homan, third Emma Miskew, second Joanne Courtney and lead Lisa Weagle scored two in the eighth end for a 5-4 win over Tracy Fleury of Sudbury, Ont.