Nanette Dupont’s eyes are set on another national crown. The Alberta skip kept her hopes of a Travelers Curling Club Championship intact after a thrilling 8-5 win over previously undefeated Northern Ontario on Wednesday evening. Dupont, who skipped Alberta to victory in the 2010 Dominion Curling Club Women’s Championship, moves to 3-1 in the women’s Pool B standings. 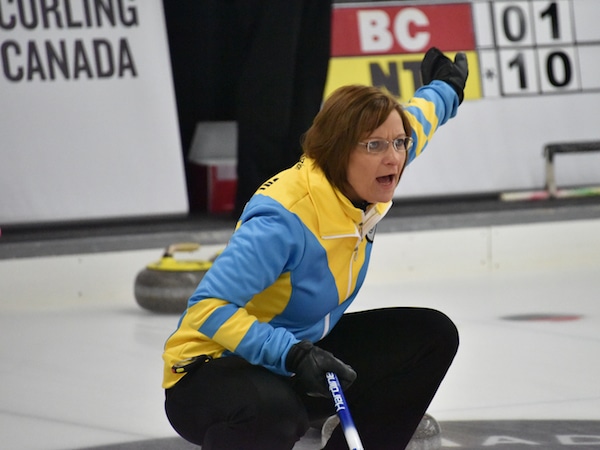 “We had to battle. It was a tough game against a really good team,” Dupont said of Kathie Jackson’s Northern Ontario rink. Jackson, out of the Fort Frances Curling Club, made a gentle angle tap for three to go up 5-3 in the fourth end. Dupont and her foursome out of the Lethbridge Curling Club responded with a single in the fifth and didn’t look back, with steals in consecutive ends, including the final end. “It was nice to know there was a (final) shot there and it was tough but it was there. We missed it by a half an inch,” Jackson said after dropping to 3-1 in the standings. Dupont’s squad was put together in the last year. Second Kendra Nakagama is a previous Curling Club Championship participant. Alberta is banking on Nakagama and Dupont’s experience at the national event and the skip says she’s taken to the role. “The other two are pretty awestruck and they’re taking everything in – as they should be. We have to go one rock at a time for all of us,” said Dupont. The Alberta women’s and men’s teams have over a dozen cheerleaders who made the trip from southern Alberta, and Dupont reiterates she wants to give them something to cheer for on the weekend: “Our expectations are to make playoffs and we need to win at least one more to get there.” Northern Ontario remains in the playoff mix but their game plan may need some tweaking. “We need our ‘A’ game on Thursday and we may look to make our game a little more simple,” said Jackson. 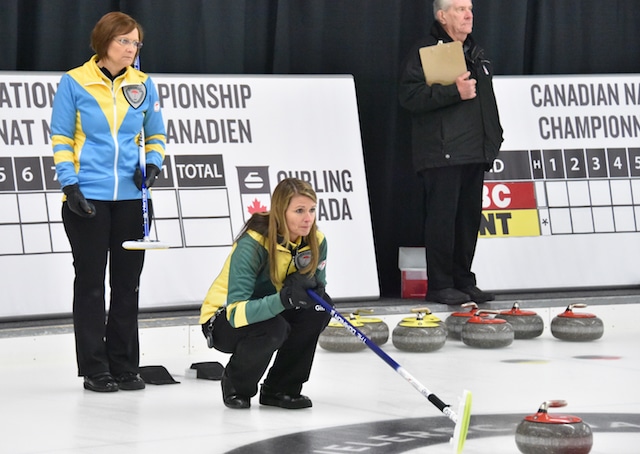 Elsewhere in women’s games, British Columbia stole an extra-end win from Northwest Territories to move to 4-1. British Columbia will clash with Alberta Thursday evening in a game that could determine Pool B’s top ranked team. N.W.T drops to 0-4. Yukon picked up their second win thanks to three-enders in the fourth and seventh ends against Manitoba. Marlene Lang’s Winnipeg rink drops to 1-3. Prince Edward Island scored a rare eight-ender and positioned themselves nicely for the playoffs with a win over Nunavut. Saskatchewan got by Newfoundland and Labrador and Nova Scotia downed Quebec in the other women’s evening match. In men’s action, Newfoundland and Labrador locked up first place in men’s Pool A action with a 9-2 decision over Nunavut. Several teams hope to stay in playoff contention and have even win/loss records. Ontario and Prince Edward Island have 2-2 records after Palmerston Curling Club’s Mike Benjamin’s defeated P.E.I 11-2. Team Quebec also moved to 2-2 while handing Nova Scotia their second loss of the day. Yukon men upset Northern Ontario 6-4, while New Brunswick slid by Alberta. Manitoba improved to 3-1 with a win over Northwest Territories. The 14 men’s and 14 women’s teams are split into two seven-team round-robin pools. After a single round-robin, the top three teams in each pool will make the playoffs. The first-place teams will be seeded directly into the semifinals, Friday, Nov. 27, at 6:30 p.m. (all times Eastern). The second- and third-place teams will meet in crossover quarter-finals Friday at 1:30 p.m, with the winners moving into the semis. The gold- and bronze-medal games are set for Saturday, Nov. 28, at 10 a.m. Selected games from the 2015 Travelers Curling Club Championships will be live-streamed at www.curling.ca/2015travelers/ Scores and standings from the event will be available at www.curling.ca/scoreboard/. For draw times, team lineups and other event info, go to: www.curling.ca/2015travelers/