As Andrew Symonds prepared his St. John’s rink ahead of their trip to Ottawa he told them the goal was to be playing “meaningful” games in the lead-up to the weekend. The Newfoundland and Labrador skip and his rink of third Mark Healy, second Cory Ewart and lead Keith Jewer find themselves atop the men’s Pool A standings at 4-0 after a Wednesday afternoon win over Nova Scotia. 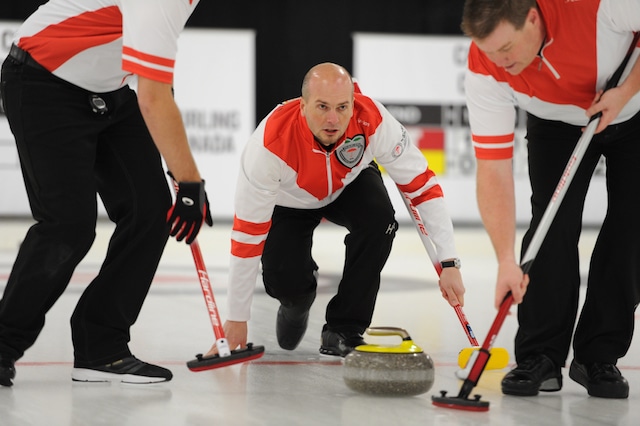 “It feels awesome. First time at a nationals and to be 4-0? It feels great,” Symonds said after they grabbed a win from previously unbeaten Mike Callaghan’s Nova Scotia rink. The Newfoundland rink stole a single in the seventh end, which put them up 5-3 in the eighth end without hammer. Symonds was attempting to pick out the Nova Scotia counter in the eighth end for the win but crashed on a Newfoundland rock in the house leaving an open draw for Nova Scotia to force the extra end. Callaghan was light on the draw resulting in a 5-4 final in favour of the Re/Max Centre rink from St. John’s. “We’ve worked pretty hard for the past two months, throwing rocks at lunch, weekend team practices, playing as many games as we can,” Symonds said between afternoon draws. Newfoundland and Labrador returns to the ice at 4 p.m. ET to play Nunvaut. 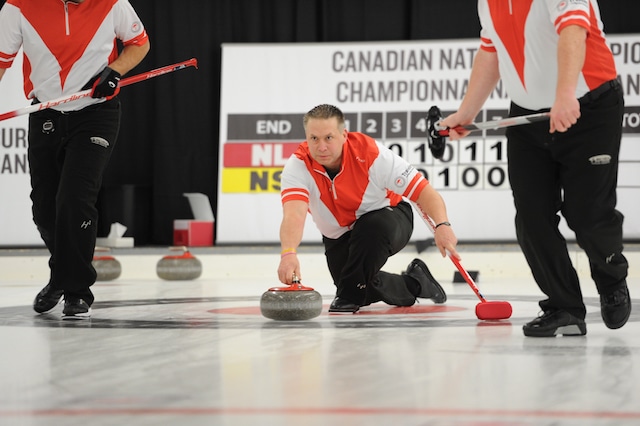 The loss drops Nova Scotia to 2-1. Elsewhere in men’s play on Wednesday, Alberta and Manitoba both picked up their second wins of the event. New Brunswick, Ontario and Prince Edward Island also grabbed Wednesday wins. In women’s play Ontario continued to cruise in Pool A with an 8-4 win over Halifax’s Monica Moriarty’s rink. Nova Scotia drops to 1-2 while Ontario improves to 4-0. Team Quebec picked up their first win with a victory over Nunavut while Prince Edward Island suffered their first loss of the event, falling 5-3 to Saskatchewan. The Moose Jaw Ford Curling Center rink moves to 2-2. Northern Ontario will look to stay perfect on Wednesday evening in Pool B when they face 2-1 Alberta. The 14 men’s and 14 women’s teams are split into two seven-team round-robin pools. After a single round-robin, the top three teams in each pool will make the playoffs. The first-place teams will be seeded directly into the semifinals, Friday, Nov. 27, at 6:30 p.m. (all times Eastern). The second- and third-place teams will meet in crossover quarter-finals Friday at 1:30 p.m, with the winners moving into the semis. The gold- and bronze-medal games are set for Saturday, Nov. 28, at 10 a.m. Selected games from the 2015 Travelers Curling Club Championships will be live-streamed at www.curling.ca/2015travelers/ Scores and standings from the event will be available at www.curling.ca/scoreboard/. For draw times, team lineups and other event info, go to: www.curling.ca/2015travelers/