For Prince Edward Island’s Lisa Jackson the plan was to make the playoffs. The bonus was achieved on Thursday evening when her team from the Cornwall Curling Club qualified directly to Friday’s semifinal thanks to a 4-3 win over Ontario. “That’s sort of my style, defensive and not many rocks in play. When it came down to it the game was on the line with a couple of shots at the end,” Jackson said after the game. 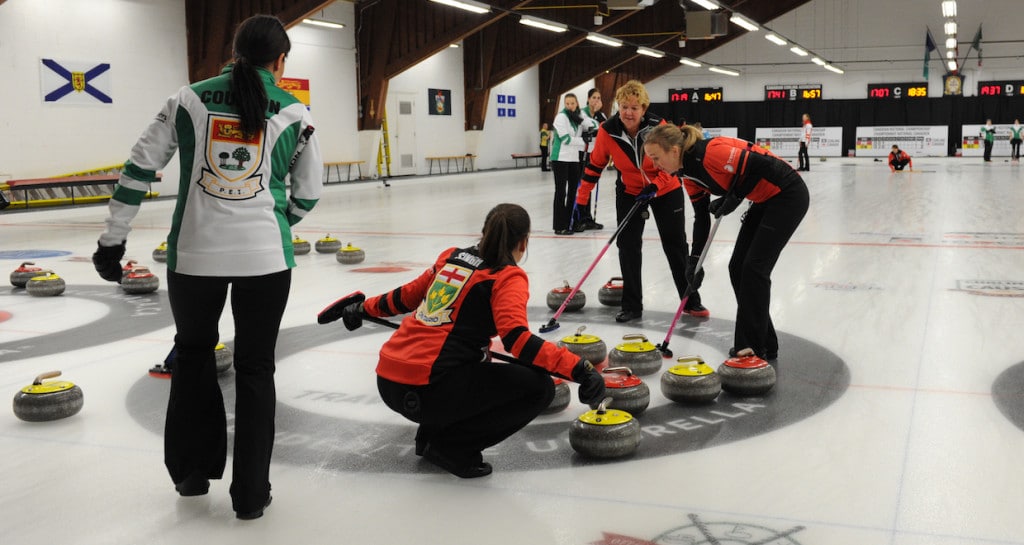 Tina Mazerolle had a quiet tap to score a point in the sixth end but couldn’t find the inside of the PEI stone and gave up a steal of one. The Ontario skip blanked the seventh end and was attempting to keep the final end clean but a great draw and guard by the Islanders left Mazerolle with a difficult double to win. It over-curled and resulted in a steal and the win for PEI. “We came here hoping to make the playoffs, but this is just extra now – to have one less game,” Jackson said. P.E.I., as a different team, lost the final of the women’s event last year in Halifax. “We feel a bit of extra pressure because of that. Some big shoes to fill for sure,” Jackson admitted. Ontario was previously unbeaten and will now drop into a quarterfinal on Friday afternoon against British Columbia. In other women’s play, Northern Ontario downed New Brunswick 8-5 to secure their spot in Friday playoff action. Northern Ontario will play Saskatchewan in the other quarter-final. Alberta ran British Columbia out of rocks in the eighth end to earn their direct bye into the semifinal thanks to a 5-1 record. Nova Scotia defeated Newfoundland and Labrador 5-4 to finish with identical 2-4 records. Quebec finished their tournament at 3-3 with a win over playoff-bound Saskatchewan. Manitoba (2-4) got past Northwest Territories (0-6). The 14 men’s and 14 women’s teams are split into two seven-team round-robin pools. After a single round-robin, the top three teams in each pool will make the playoffs. The first-place teams will be seeded directly into the semifinals, Friday, Nov. 27, at 6:30 p.m. (all times Eastern). The second- and third-place teams will meet in crossover quarter-finals Friday at 1:30 p.m, with the winners moving into the semis.
The gold- and bronze-medal games are set for Saturday, Nov. 28, at 10 a.m.
Selected games from the 2015 Travelers Curling Club Championships will be live-streamed at www.curling.ca/2015travelers/ Scores and standings from the event will be available at www.curling.ca/scoreboard/. For draw times, team lineups and other event info, go to: www.curling.ca/2015travelers/