With his last shot of the game in the Meridian Canadian Open semifinal, John Epping made a shot that is considered by many to be the best of the year. 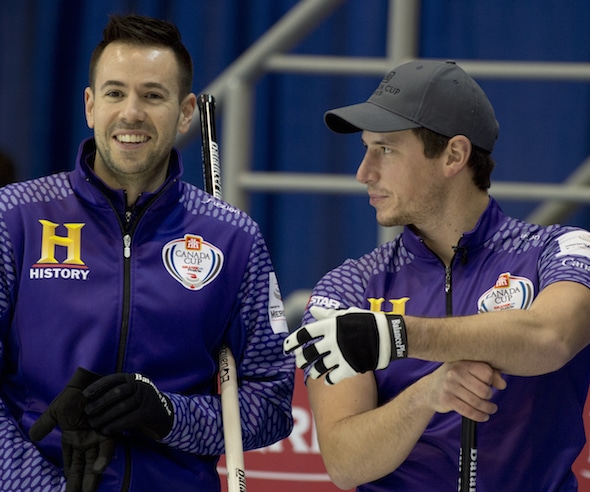 John Epping, left, and Mat Camm are on a roll of late, including a win in the Meridian Canadian Open on Sunday. (Photo, Curling Canada/Michael Burns)

Trailing by one to Calgary’s Kevin Koe, the Toronto skip made a long inturn angle runback to spill two rocks (one frozen on the other) far enough that the remaining three rocks had to be measured. Two were Epping’s, one was Koe’s, and by the time the stick was swung around, both of the former’s counted, and he punched his ticket to the Pinty’s Grand Slam final in Yorkton, Sask. Brad Gushue’s St. John’s foursome awaited them in the final, but that turned out to be like waiting for a runaway train. Epping showed no signs of slowing down, posting a perfect 100 shooting percentage in the championship-game 7-4 victory; including two more long inturn angle runbacks, each time for multiple points. “Would have needed to take John Epping’s knees out to beat him today,” Team Gushue posted on their Facebook page. “Too good.” For Epping, the Slam win earned him $25,000 and 84.171 points on the Canadian Team Ranking System, his second big gain in consecutive weeks. A week earlier, he finished third at the Home Hardware Canada Cup, presented by Meridian Manufacturing, which earned him another 52.444, pushing him several spots up the rankings and into seventh place overall. For Gushue, another Grand Slam final adds to the massive pile of points he’s already earned this year. With the first half of the season all but wrapped up, Gushue’s 468.463 points has him with a solid lead on the CTRS rankings, with only Koe in striking distance. On the women’s side, it was more of the same as Ottawa’s Rachel Homan won her seventh event of the year, beating Winnipeg’s Jennifer Jones 8-7 in the final, thanks to an eighth-end deuce. Team Homan, like Team Gushue, sits in first place in the CTRS standings with a healthy lead, although the rest of the ladies field is much farther back than any of the men’s teams. Koe trails Gushue by roughly 40 points, while second-place Jones is more than 220 points back from Homan. For Jones, reaching the Yorkton Grand Slam final was another step in the right direction. After a slow start to the season (by Team Jones standards), the last few events have moved the squad all the way up to second place on the CTRS, from eighth place just two months ago. A win at the Dekalb Superspiel in Morris, Man., a third-place finish at the Home Hardware Canada Cup, and another final in this weekend’s Canadian Open show them rounding into form.  Homan, meanwhile, is firing on all cylinders, and will be the force to be reckoned with through the second half of the season.