The kids are all right – and giving back! – at the Ottawa Youth Curling League

Everyone knows that curlers are the first in line to volunteer for worthy causes, not just in their own clubs, but in the wider community, too. This season, a commitment to nurturing young curlers in the art of “giving back” was right at the top of the list for organizers of the Ottawa Youth Curling League. Remember the OYCL? We profiled this fledgling league for young curlers on our website last May, sharing the story of its overwhelming success in the first season of providing sport development and competition to Ottawa-area curlers under the age of 18. In its second season, reports OYCL co-ordinator Marc Bourguignon, the league wanted to do even more, and it comes as no surprise to him that these young curlers are already well on their way to surpassing expectations. 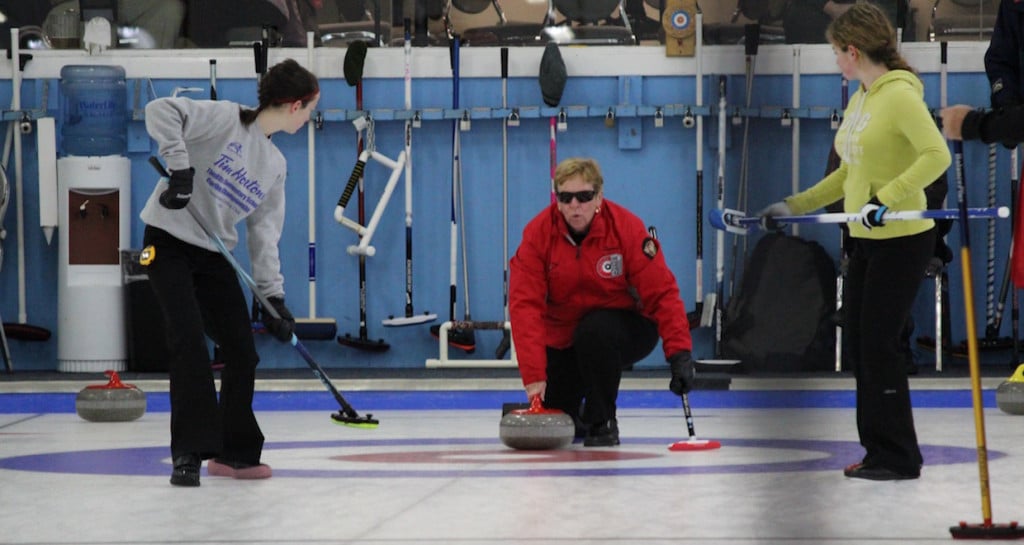 When last-minute entries at the ParaSport 2015 curling competition were short of sweepers, OYCL volunteers joined the action on the ice to help out. (Photo courtesy of M. Bourguignon)

“This summer the OYCL committee met with an objective to find new opportunities for our members,” says Bourguignon. “We reached out to different groups and landed on a few nice opportunities with the mindset of ‘Give Back’. With 20 teams and close to 100 curlers registered in three divisions this season, the response from members and parents to these opportunities was overwhelming.” Elaine Brimicombe is vice-chair of Special Events and Volunteers for the 2016 Tim Hortons Brier taking place March 5-13 in Ottawa, and she was on the lookout for opportunities to engage the local community. “I approached Marc to get the young curlers involved,” she says. “I have been very impressed by the OYCL and wanted to give them an opportunity to volunteer at a high-calibre event.” During the World Curling Tour’s Chateau Cartier Challenge in Gatineau, Que., last October, Brimicombe enlisted 22 OYCL curlers to promote the Brier by using social media to post photos of themselves with some of the elite teams at the competition using the hashtag #Brier2016. These young volunteers also provided the public with information about Brier ticket sales and draw times, as well as encouraging visitors to check out the Brier display on site and take “selfies” or engage in a game of tabletop curling. 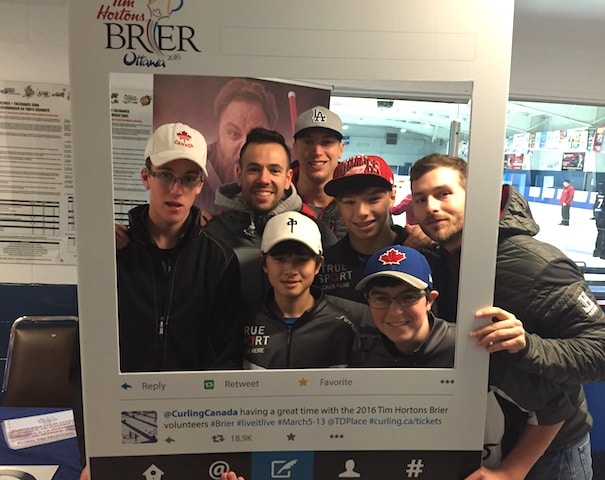 Helping to promote the 2016 Tim Hortons Brier, volunteers from the OYCL posed with competitors (in this case, Team John Epping) at the Tim Hortons Brier booth during the Chateau Cartier Challenge in Gatineau, Que. (Photo courtesy of M. Bourguignon)

“I was very impressed with the positive attitude of the young curlers,” says Brimicombe. “They were a great help. I believe the elite curlers enjoyed meeting them as much as the young curlers enjoyed meeting their curling heroes. The young curlers answered questions from the public with an engaging smile. They are great ambassadors for our game. I look forward to working with them in the future.” In another initiative, 16 OYCL members spent two days helping out at the Ontario ParaSport Championships held at the RA Centre in November. Susanne Martin is the ParaSport Event Coordinator for Curling with the Ontario Curling Council (OCC). Working closely with ParaSport Ontario this year, the OCC offered a new competitive opportunity for Wheelchair and Visually Impaired (VI) curlers. 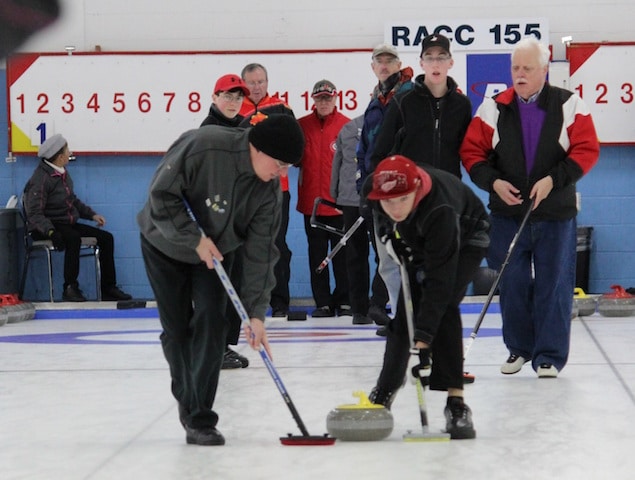 At ParaSport 2015, OYCL volunteers assisted Visually Impaired curlers on the ice by guiding them from one end of the sheet to the other during games at the RA Centre in Ottawa. (Photo courtesy of M. Bourguignon)

“The OCC presented the Ontario ParaSport Championship, a ‘mini games’ in the Ottawa area,” says Martin. “In this competition, curling ran concurrently with two other sports, goalball and boccia, providing our curlers with the experience of competing in a multi-sport environment.” Organizers were faced with a challenge, however. The VI competition was a late addition to the event, and some teams arrived without designated sweepers, an essential requirement for totally blind athletes. So Martin, a club-mate of Bourguignon’s at RCMP, approached him with the suggestion of youth volunteers. “It was so much fun,” enthuses Martin, who says two girls’ teams volunteered on Saturday, with the boys coming on Sunday. “Having the youth there brought additional energy to the event. I was super lucky with the two girls’ teams that came on Saturday, because at the last minute I had a Wheelchair team drop out. The girls managed two different Para requirements: first, they played a game against a Wheelchair team where (we levelled) the playing field by not allowing the girls to sweep; and second, they filled in as designated sweepers for the VI teams.” This kind of enthusiasm was appreciated by everyone, says Martin, who noted how quickly the kids adapted to the Para-curling requirements, including assisting VI teams by guiding totally blind curlers from one end of the sheet to the other during games. “Everyone certainly enjoyed their enthusiasm for curling, their kindness and their willingness to help in all the different volunteer duties I threw at them over the weekend,” she says. 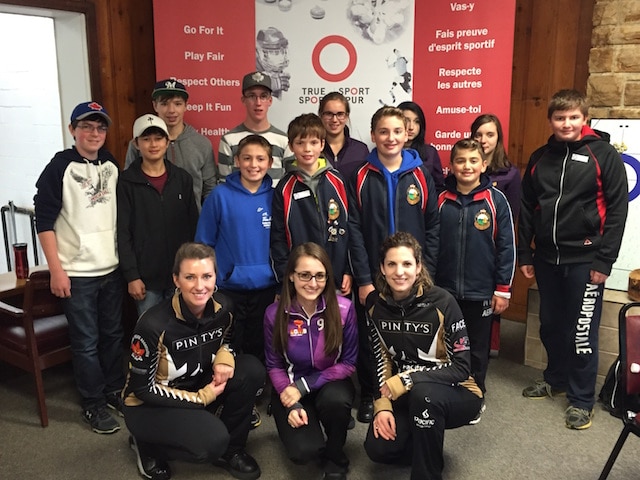 It’s possible that the OYCL volunteers picked up a few tips on giving back early in the season, when familiar local high-performance curlers Emma Miskew and Lisa Weagle (third and lead on Team Rachael Homan) and Cheryl Kreviazuk (lead on Team Mallory Kean) generously offered their time and experience in an “Ice-Breaker” session, during which curlers and parents had the opportunity to meet, ask questions and get a bit of on-ice coaching from their favourites. “The youth athletes certainly lived up to their motto of Play Hard, Play Fair, Be Respectful and Have Fun,” says Martin. “My hat’s off to them and their coaches. Our curling future is in good hands with the OYCL.”