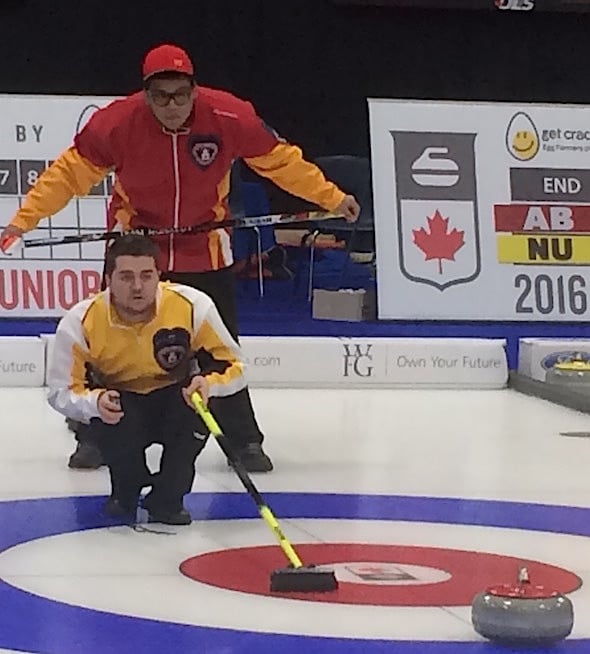 Manitoba skip Matt Dunstone is looking to replicate his gold-medal success of 2013 in Fort McMurray, Alta. Nunavut skip Arthur Siksik, meanwhile, is looking for continued improvement from the developing curling program in his home territory.

The scoreboard might only show one team met its expectations Saturday at the Stratford Rotary Complex in the opening draw of the 2016 Canadian Juniors. But, rest assured, both teams left the ice with smiles on their faces after Manitoba’s 33-1 victory.

“It’s only our fourth year, so my expectations are pretty realistic,” said Siksik, 20, with a laugh. “We were playing Manitoba. Manitoba! Geez! They’re a great team.”

Siksik, whose Rankin Inlet team is rounded out by third Tyson Komaksiutiksak, second Javen Komaksiutiksak, lead Ryan Aggark and coach Sean Turriff, played lead for the first Nunavut men’s team to compete at the Canadian Juniors, in 2013, where he first ran across Dunstone. And while the end results haven’t changed much (Nunavut is still looking for its first-ever win at the Canadian Juniors), Siksik insists Nunavut curling is heading in the right direction.

“I’m a lot more knowledgeable about technique and strategy,” said Siksik, who also competed in the Nunavut Tim Hortons Brier playdown before being sidelined by a bout of food poisoning. “But we’re still a pretty young team. I went through the Extra End program and was reading all the players’ bios and how many years they’ve been curling, almost as long as they’ve been alive. I’m like, gee, I just started four years ago.”

Alberta fans were in a cheering mode on Saturday.

Dunstone, who has only third Colton Lott remaining from the 2013 team — second Kyle Doering, lead Rob Gordon and coach Calvin Edie complete the current lineup — was full of praise for his opponents.

“Their attitudes are unbelievable,” said Dunstone. “Obviously, things weren’t quite going their way out there, but they were having fun out there, there were always smiles on their faces. And the best part is that I was talking to their skip the whole game, we were having a good time. It’s awesome to see them out here.”

Dunstone’s team is certainly among the favourites here, and he makes no bones of his desire for a second gold medal and a chance to improve on the world championship bronze he won in 2013.

But, he added, his team — every team in Stratford, in fact — can take some inspiration from Team Nunavut’s obvious joy at being a part of the 2016 Canadian Juniors.

“It’s putting things into perspective and realizing why we play the game,” said Dunstone. “These guys sure show that they love the game, and it kind of reminds our team that we’re having fun out here, playing for a national championship. Not everyone gets to do this, so have fun while you’re at it.”

Action at the 2016 Canadian Juniors continues Saturday with the final draw of the day at 6:30 p.m. (All times EST).