STRATFORD, Ont. —  Jake (The Snake) Hersikorn has watched the TSN broadcast of his dramatic junior men’s semifinal win over New Brunswick at the 2015 Canadian Juniors a number of times. 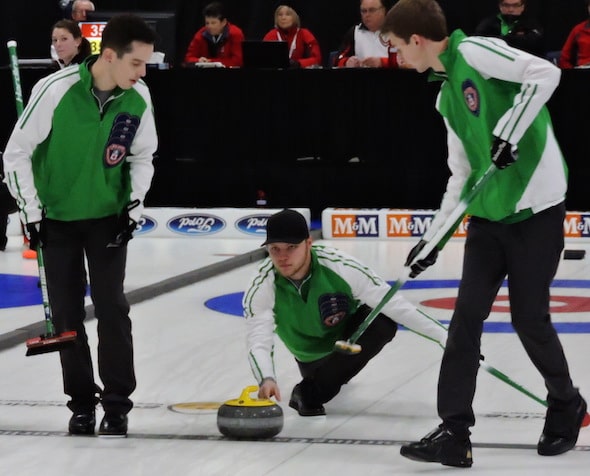 A Hersikorn double-takeout on the game’s final shot sent his team to the gold-medal game in Corner Brook, N.L.

The final, against Manitoba’s Braden Calvert, on the other hand? Well, Hersikorn has watched it. Just once.

“I watched the final about a week after; I’ve watched the semifinal a couple more times,” he said with a smile. “The final’s not my favourite game to watch. But it’s good to have that available because we can learn from it, where we went wrong, what we did right. It was still hard to watch it; I got mad at myself a few times. Hopefully we can get back there. And change the outcome.”

Well, Hersikorn’s Saskatchewan team, silver-medallists a year ago, showed Monday morning at the 2016 Canadian Junior Curling Championships, presented by Egg Farmers of Ontario, that it can learn from its mistakes.

Sunday afternoon, Saskatchewan bow 8-6 to B.C.’s Tyler Tardi thanks to a slow start that allowed B.C. to steal three in the second end and one more in the third.

Monday morning, Saskatchewan bounced back effectively with an emphatic 10-3 win over P.E.I.’s Matthew MacLean (1-3; O’Leary) at the Stratford Rotary Complex.

“I’ve always said as a coach that I think you should lose 10 per cent of your games,” said Saskatchewan coach Laurie Burrows. “They went back and took a look at the loss, and they didn’t play well the first half of the game. But there’s nothing wrong with one loss in this. It puts some pressure on them, and it gets them in the game; it’s a mental thing. And they were right on their game today. Their strategy was right, lots of pressure on the other team — they played a great game.”

Hersikorn needed to replace two players from last season who aged out of juniors; Brady Kendel was moved up to third, while Tony Neufeld (holding the broom on skip rocks) and Nick Neufeld (they’re cousins) came in at second and lead respectively. The current lineup also played together in the Under-18 ranks.

“We felt pretty comfortable with them,” said Hersikorn, who’s in his final year of eligibility. “We’re pretty good friends, and when we asked them, they were all for it and they were excited.”

In other men’s play on Monday morning, Manitoba’s Matt Dunstone, the 2013 Canadian champ (Winnipeg), improved to 4-0 with a 7-2 win over Nova Scotia’s Matthew Manuel (1-2; Halifax).