Another historic day for Nunavut at 2016 Canadian Junior Championships

STRATFORD, Ont. — It took nearly four years for a Nunavut team to win a game at the Canadian Junior Curling Championships, presented by Egg Farmers of Ontario.

Now, in less than 24 hours, there have been two Nunavut victories. 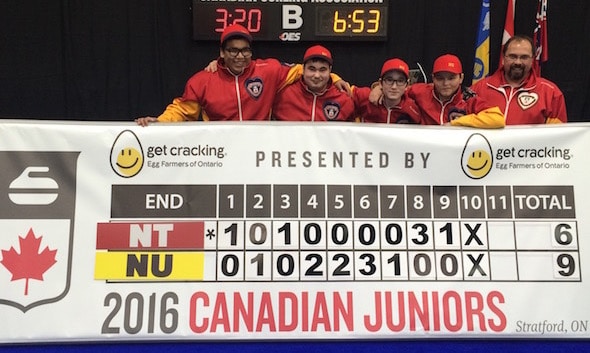 Tuesday night at the Stratford Rotary Complex, Sadie Pinksen’s women’s team gave her territory its first-ever win at the Canadian Juniors, a 7-3 win over the Northwest Territories.

(The six teams of each gender that didn’t make the Championship Round are playing Seeding Pool games to determine final rankings and set the pools for next year’s Canadian Juniors in Victoria).

“Oh, man. I’m a little bit emotional,” said the 20-year-old Siksik, taking a long breath to collect himself. “I don’t know … it’s awesome. After the losses, we were used to it, and we weren’t really sad. But yesterday, I was down about the loss against Newfoundland (a 14-0 loss to Newfoundland/Labrador’s Greg Smith). I could have made the shots. And I didn’t. So I was really down. But after the game, Sean just kept me really upbeat.”

That clearly paid off on Wednesday as the Nunavut team rolled to a 9-2 lead through seven ends.

Turriff, who’s based in Ontario, didn’t start working with the team until Jan. 18 during a pre-event training camp in Winnipeg. The team’s regular coach, Angela Dale, couldn’t attend the Canadian Juniors, and through Bill Tschirhart, was able to make a connection with Turriff to coach the team in Stratford.

“It’s hard not to be really emotional,” said Turriff. “Having just met them a week and a half ago to this point? I can’t calm down right now. It’s been a journey. Every game, we had smaller goals. Everybody should have a shot in their game that they can brag about, and that was great. After the games, we’d talk about those shots and we’d be leaving feeling pretty good. But now, we can brag about the whole game.”

Pinksen’s team, based in Iqaluit, was able to watch the final couple ends and join in the celebration with the Nunavut men.

Siksik jokingly admitted to some mixed feelings about seeing the Nunavut women win on Tuesday night.

“Well, actually, I was half happy, half-disappointed,” he confided with a laugh. “I wanted to be the first. I was being selfish. But it was good to see the girls win.”

Meanwhile, the Championship Round also started on Wednesday afternoon, with 2013 gold-medallist Matt Dunstone of Manitoba (7-0; Winnipeg) and Tyler Tardi of B.C. (7-0; New Westminster/Langley) both remaining unbeaten, and seemingly headed to a Friday morning showdown that could decide first place and a bye to Sunday’s gold-medal game.

Manitoba scored three in the fifth end to take control en route to a 7-3 win over Alex Robichaud of New Brunswick (4-3; Moncton), while B.C. scored a big three-ender in the eight end and sailed to a 10-4 win over Ontario’s Doug Kee (4-3; Navan).

In the other Championship Round game, Northern Ontario’s Tanner Horgan (6-1; Copper Cliff) remained alone in the third and final playoff position with an 8-6 victory over Alberta’s Karsten Sturmay (3-4; Edmonton).

While the first-place team gets the bye to the final, the second- and third-place teams will meet in Saturday’s semifinal.

The Championship and Seeding Rounds continue on Wednesday with a draw at 6:30 p.m. (all times EST).