STRATFORD, Ont. — There was a distinct buzz in the air Thursday night at the Stratford Rotary Complex, and Tanner Horgan’s Northern Ontario team played a major role in generating it. 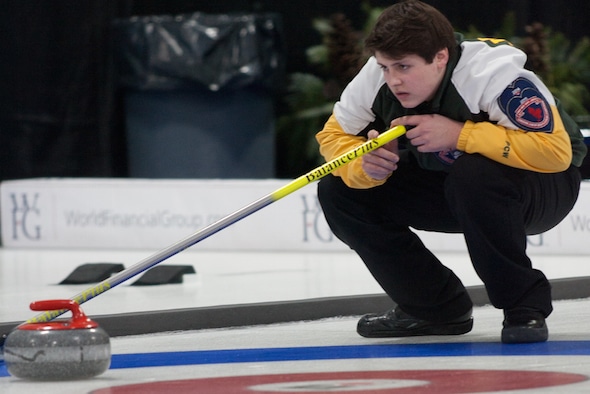 On an evening jam-packed with Championship Round showdowns at the 2016 Canadian Junior Curling Championships, presented by Egg Farmers of Ontario, Horgan’s team from Copper Cliff took an extra end to beat previously unbeaten 2013 Canadian champ Matt Dunstone of Manitoba (Winnipeg) 7-5.

The win left Horgan’s team — third (and younger brother) Jake Horgan, second Nick Bissonnette, lead Maxime Blais and coach (and dad) Gerry Horgan — tied with Manitoba at 8-1. Both teams are assured of semifinal berths, but Northern Ontario can clinch first, and a bye to Sunday’s gold-medal game (3 p.m. EST, TSN/RDS) with a win Friday morning against Quebec’s Félix Asselin (Montreal). Manitoba would get the bye to the final with a win over B.C.’s Tyler Tardi (7-2; New Westminster/Langley) and a Northern Ontario loss.

“That was a lot of fun to play,” said the smiling Tanner Horgan, 17. “It was at such a high level — both teams played really well.”

That they did, but it was Horgan who made the bigger shots against the more experienced Dunstone — none bigger than his stunning raise double-takeout in the eighth end that forced Dunstone to draw for a single.

It was a game, suggested Horgan, that should give his team a boost going into its round-robin finale on Friday, and the playoff weekend.

“For sure,” he nodded. “Up until this point, those guys were undefeated, and now other teams might say, ‘Wow, Northern Ontario can beat them.’ I think that gives us a lot of confidence moving forward.”

B.C., meanwhile, fell victim to Thursday’s feel-good story as Quebec rattled off its second big win of the day despite Asselin playing with his right (throwing) shoulder in a sling due to a dislocated shoulder he suffered late Wednesday night playing table tennis. Quebec improved to 6-3 with a 9-5 win, and can force a third-place tiebreaker against B.C. with a win over Northern Ontario and a B.C. loss to Manitoba.

B.C. needed an extra end to beat Manitoba’s Abby Ackland (7-2; Winnipeg) 8-5. Ackland had an open hit to score three for the win in the 10th end but rolled out to score only the game-tying deuce.

“Today was a very stressful game; Manitoba played very well, but I think we were able to keep up,” said Daniels, who along with her third Marika Van Osch won bronze at the 2014 Canadian Juniors in Liverpool, N.S. “Now, we’ll just keep moving forward and doing what we’re doing. We’re sticking together — miss, make, we’re always about team.”

Daniels said the experience of 2014 — she played second for Van Osch’s older sister Kalia — will help the team this year.

“Just playing on TV before has really given us that confidence to not be too camera-shy,” said Daniels. “Big games? I’m just happy to be there, win or lose.”

B.C. would clinch first and a berth in Sunday’s 10 a.m. gold-medal game with a win Friday morning against New Brunswick, while Nova Scotia needs a win over Manitoba and a B.C. loss to advance to the women’s final.

Manitoba, meanwhile, can advance to Saturday’s 2 p.m. semifinal (the men’s semi is at 7 p.m.) with a win, but a Manitoba loss and wins by New Brunswick and/or Quebec’s Laurie St-Georges (6-3; Laval-sur-le-Lac) would force tiebreakers.

In Seeding Pool games, Nunavut’s Sadie Pinksen (2-7; Iqaluit) capped off her round robin with her team’s second victory, 11-3 over the Yukon’s Alyssa Meger (2-7; Whitehorse). The win nailed down the unofficial Polar Cup for Nunavut, which also had a win over the Northwest Territories.

In men’s Seeding Pool play, Newfoundland/Labrador’s Greg Smith (5-4; Stephenville) was a 17-4 winner over Matt Miller of the Northwest Territories (1-8; Inuvik).

The six teams of each gender that didn’t make the Championship Round played Seeding Pool games to determine final rankings and set the pools for next year’s Canadian Juniors in Victoria.

The Championship Round wraps up on Friday morning with the final round-robin draw at 9 a.m. Tiebreakers, if necessary, would be played at 2 p.m.