With the number of upsets at the women’s provincial finals, the Scotties Tournament of Hearts lineup will feature a number of underdogs and unfamiliar faces — or at least some faces we haven’t seen in a while. 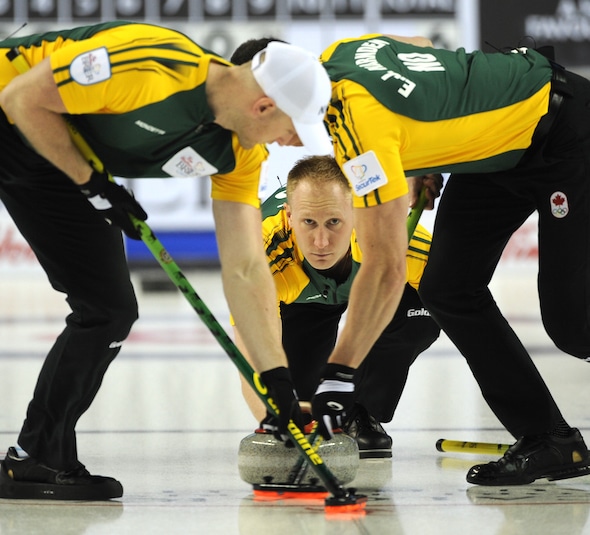 The Tim Hortons Brier field, however, is coming together slowly but surely, and many players we’re used to seeing wearing Purple Hearts will head to Ottawa to do it again. Newfoundland and Labrador will send Brad Gushue. Quebec will send Jean-Michel Menard. Ontario will send Glenn Howard. Combined, those three players have 37 Brier appearances (prior to this year), not to mention a few more from Saskatchewan skip Steve Laycock and New Brunswick skip Mike Kennedy.

This week, the rest of the regions will determine their representatives. The Manitoba, Alberta, Northern Ontario and British Columbia provincials begin Wednesday, and in each case there are a few veteran teams who will be heavily favoured to earn another championship banner.

Great tickets for the 2016 Tim Hortons Brier in Ottawa are still available by clicking here.

Here’s a look at what’s on tap:

The North Bay Granite Curling Club will host the Travelers Northern Ontario men’s championship. Olympic gold-medallists and former 2013 Tim Hortons Brier champs Team Brad Jacobs will be a heavy favourite in the eight-team field. The Sault Ste. Marie foursome lost the Brier final last year and certainly expect to be back at this year’s event.

Standing in their way is Colin Koivula, the only other skip in the 2016 field to represent Northern Ontario at a Tim Hortons Brier in recent memory (he played second in 2014 for Jeff Currie). That was, however, in 2014 when Team Jacobs was unable to compete thanks to a conflict with their Olympic run in Sochi. Also in the mix is Tanner Horgan, silver medallist at the recent Canadian Juniors. The young team is certainly capable and will likely win their fair share during the week.

But unless there’s a significant upset, it will be Jacobs punching his Brier ticket for the eighth time.

Manitoba’s Viterra Championship is a 32-team event being held at the Selkirk Recreation Complex. Defending Manitoba champion Reid Carruthers is the top seed, but fellow Winnipegger Mike McEwen might as well be marked “1A.” Both McEwen and Carruthers have put up impressive numbers this season, with McEwen having a slight edge in their five matchups (three wins for McEwen, two for Carruthers). McEwen and Carruthers are ranked third and fourth respectively on the Canadian Team Ranking System, and will be the two clear favourites.

Also in the mix are William Lyburn (CTRS No. 13), Alex Forrest (CTRS No. 21) and Daley Peters (CTRS No. 31), not to mention Canadian Junior champion Matt Dunstone, who is using the event as a tune-up for the World Junior Championships in Copenhagen, Denmark.

The broadcast schedule will be as follows:

With Team Pat Simmons back at the Tim Hortons Brier under the Team Canada banner, the road to a fifth Brier appearance seems to be a little bit easier for Calgary’s Kevin Koe. That’s not to say the 12-team Alberta Boston Pizza Cup in Camrose will be a cakewalk, but there’s no denying the defending champ is still the clear favourite.

Brendan Bottcher (former Canadian and World junior champion) and Charley Thomas (two-time Canadian and World junior champion) have both graduated to the men’s ranks and are making waves in World Curling Tour events. Thomas is currently ranked eighth in Canada, while Bottcher is close behind in 10th place. To put that in perspective, the aforementioned Team Canada (Simmons) is currently ranked 12th based on its tour performance this year.

The Canadian Direct Insurance B.C. Provincial Curling Championships will take place this week in Nelson, and like many of the other provinces, the clear favourite is the defending champ. Vernon’s Jim Cotter, currently ranked 11th on the CTRS, has represented B.C. five times at the Brier, and could very well claim his sixth trip this week.

On paper, Cotter’s biggest competition is two-time B.C. champ Dean Joanisse, who sits at No. 25 on the CTRS rankings. Cotter beat Joanisse in an extra end in the 2015 provincial final.

The triple-knockout event will feed into a Page playoff, with the semis and finals on Sportsnet Pacific at 2 p.m. EST and 7 p.m. EST.