First there were nerves, followed by relief and then tears of joy Thursday evening when Nunavut made its successful debut at the Scotties Tournament of Hearts. 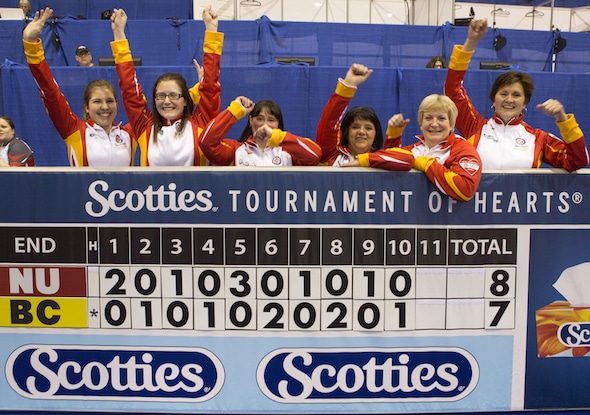 The Iqaluit team skipped by Geneva Chislett stole two in the first end, got three more in the fifth and then survived a late rally by British Columbia to score an 8-7 victory in the first draw of pre-qualifying Thursday at Revolution Place in Grande Prairie, Alta. “Oh my God, it’s awesome,” said Chislett after the emotional win that saw her shedding tears. “We came here with nothing to lose. We just wanted to go out there and try to be competitive. It’s awesome for curling in Nunavut. “We definitely wanted to prove we belong here. Maybe we don’t get all the competition we need (at home) but with this win I think we show we should be here.”

Nunavut’s first-ever stone thrown in the Scotties Tournament of Hearts, by lead Jenine Bodner, was a successful corner guard. “I was just so excited to come and represent Nunavut I can’t even remember what I was trying to do,” Bodner said of her historic shot. “But we played one of our best games ever. “It’s going to be huge for little old Nunavut to win at a national competition. I’m sure everyone’s on Facebook and Curling Canada right now watching.” Nunavut is competing in the Canadian women’s curling championship for the first time. They are in a four-team prequalifying tournament, trying to earn a berth in the main Scotties round-robin draw, which begins Saturday. Chislett, third Denise Hutchings, second Robyn Mackey, Bodner, alternate Sadie Pinksen and coach Donalda Mattie used the corner guard to its full advantage to steal two in the first end. B.C. skip Karla Thompson (Kamloops) was inches off with her attempt at a raise double takeout that could have given B.C. a four ender. Thompson, third Kristen Recksiedler, second Tracey Lavery and lead Trysta Vandale struggled through the first five ends and when Thompson slid through the house with her last rock in five, that allowed Chislett to score three for a 6-2 lead. In the other game, the Northwest Territories skipped by Kerry Galusha, a 10-time NWT champion from Yellowknife, with third Megan Cormier, second Daniele Derry and lead Shona Barbour, defeated Nicole Baldwin and her Yukon team from Whitehorse 10-7. A burnt stone by Nunavut in the sixth opened the door for B.C. to score two and another pair in eight cut Nunavut’s lead to 7-6. Chislett’s last-rock hit-and-stick in nine gave her a single and an 8-6 lead. B.C. had a chance for two in the 10th but Thompson’s difficult attempt at a split the game-tying deuce wrecked on a guard and she settled for a single.

Chislett and her team successfully followed the paths of the Nunavut junior men and women’s teams that picked up their first wins at a national championship during the 2016 Canadian Junior Curling Championships, presented by Egg Farmers of Ontario, last month in Stratford, Ont. There are only three curling clubs in the Nunavut territory – one of those, in Cambridge Bay, did not operate this winter – so Chislett’s team had only to beat another team in their club. They were to then play a team from the club in Rankin Inlet, but at the last minute, it pulled out. “Curling at this level is very challenging in Nunavut,” said Chislett. “Our closest community we can go curling is Ottawa, that’s three hours away (by plane) and an average ticket is probably $2,000 so we don’t get to play other competitive teams. We mostly play in our open league, maybe against men’s teams.” Chislett’s team hasn’t played any bonspiels this winter but did represent the territory at the 2014 Travelers Curling Club Championship. Chislett and Mackey also represented Nunavut at the 2015 Canadian Mixed Curling Championship. They will play the Territories in Friday’s 8 a.m. MT draw while B.C. takes on Yukon. The final draw is at 4:20 p.m. The regular Scotties draw begins Saturday at 1:30 p.m. For ticket and other event information, visit https://www.curling.ca/2016scotties/tickets/ For the complete schedule, go to https://www.curling.ca/2016scotties/draw-schedule/ TSN (RDS2 in French), the exclusive television network for Curling Canada’s Season of Champions, will provide complete coverage of the 2016 Scotties Tournament of Hearts.