Team Canada opens with a loss at 2016 World Wheelchair Championship

Team Canada opened the round-robin competition at the World Wheelchair Curling Championship with a 7-2 loss to the home team’s Felix Wagner on Sunday afternoon in Lucerne, Switzerland. Skip Jim Armstrong, third Ina Forrest, second Dennis Thiessen, lead Mark Ideson, alternate Sonja Gaudet and coach Wayne Kiel are hoping to better Canada’s sixth-place finish at the 2015 World championship. In the opening game of the round robin, the Swiss team got off to a blazing start, scoring a deuce in the first end and going on to steal the next three ends. Canada got on the board in the fifth, but just couldn’t catch up.
“We had our chances early and it was actually my misses for most of the game,” said Armstrong afterwards. “We got behind and the ice did tighten up a bit so we were forced to make the tougher shots and it just wasn’t conducive. We had two or three opportunities and I just didn’t convert. My mom said there’d always be days like this and I guess that’s what today was going to be. It’s not going to effect tomorrow, we’ll be ready to go.”
In other games, Russia’s Andrey Smirnov defeated Germany’s Jens Jaeger 12-1, and Norway’s Rune Lorentsen defeated USA’s Patrick McDonald Live scoring, team lineups and the schedule are all available on the event website, www.worldcurling.org/wwhcc2016 Not only are medals on the line in Lucerne, but so are qualifying points to secure a berth in the 2018 Winter Paralympics in PyeongChang, South Korea. The host country is guaranteed one of the spots, so the other 11 countries will qualify based on results of the 2015, 2016 and 2017 Wheelchair Worlds. 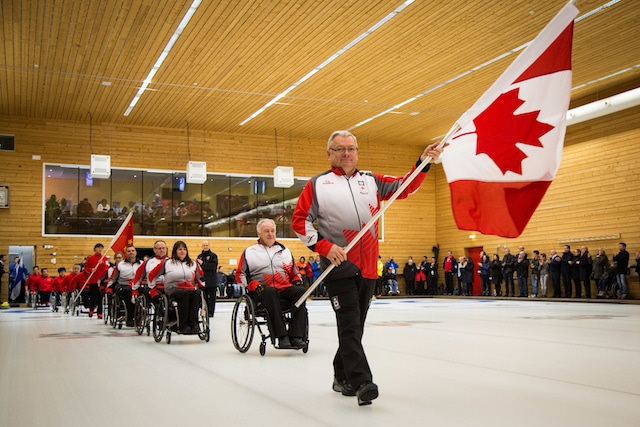 Team Canada is led into the Opening Ceremony of the 2016 World Wheelchair Curling Championship in Lucerne, Switzerland (WCF/Céline Stucki photo)