They may not be coming home with a medal, but a gutsy performance by Jim Armstrong, Ina Forrest, Dennis Thiessen, Mark Ideson, alternate Sonja Gaudet and coach Wayne Kiel to defeat Germany 6-3 on the final day of round robin competition at the 2016 World Wheelchair Championship means that Team Canada secures a spot in next year’s event without having to play through a relegation round. 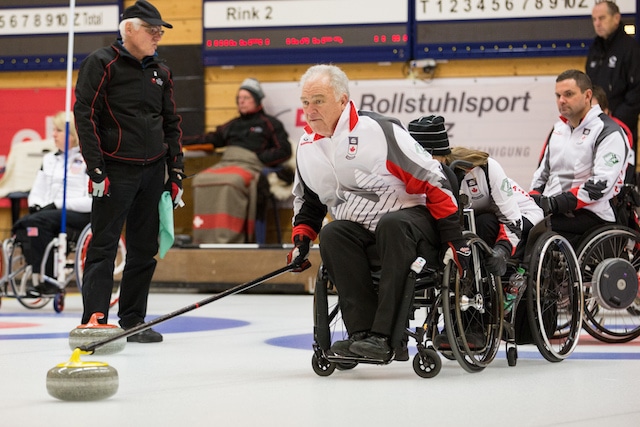 Jim Armstrong delivers his rock during the final round robin game against Germany at the World Wheelchair Curling Championship in Lucerne, Switzerland. (WCF/Céline Stucki photo)

“It was a big win today,” said Armstrong the reigning Paralympic gold medallist. “It was a big game yesterday against Norway (an 8-5 win), they were having such a good week. We’ve been on a horrific struggle and it is situations like that late in the week, and I can speak from experience, it’s much tougher to get tough when you haven’t got anything to build on from earlier in the week.” Going into the game against Germany, Canada had six losses and needed the win to ensure a place in next year’s world championship. Three stolen ends against Germany resulted in a 6-3 win and a very relieved Team Canada. “Speaking from both sides of this now, it’s a much simpler thing to maintain momentum than it is to try to find momentum and that’s where my team showed an awful lot of gutsy performances to hang in there when we needed it given the frustrations we’ve put up with all week,” said Armstrong. Armstrong had nothing but praise for his Team Canada teammates, who hung in while he struggled through a “terrible week.” “I think it really speaks to the team,” he said. “They’re grinders, they’ve always proven to be grinders since I’ve been in the programme. There’s just no quit in them. A situation like (we had) in the last two days is important to our programme back home. They just sucked it up and hung with me and we did all we could under the circumstances, so kudos to them.” Norway, Russia, Switzerland and Korea will now compete in the playoff round. With today’s win in the round robin, Canada finishes the competition in seventh place, ahead of Germany, and also ahead of Slovakia and Finland, who are relegated to the B-Championship next season to earn their way back to the world championship. “We were talking about it before the game, that was tougher going out there looking at the dreaded ‘R’ word, relegation,” said Armstrong. “It’s tougher than going out there and playing for gold. If you’re playing for gold you’ve had yourself a good week, you’re going out there to play one more game. When you’re struggling and looking at a relegation game, that’s a much tougher game to play.” The championship continues with Page playoff games today and the semifinal, bronze- and gold-medal games on Sunday. Live scoring, team line-ups and the schedule are all available on the event website, www.worldcurling.org/wwhcc2016.