Thursday morning saw a face-off between two undefeated teams, and it was Canada’s Mary Fay who came out on top of a 9-4 contest against South Korea’s Min Ji Kim, keeping her winning streak alive and ensuring the Canadian women a spot in the playoffs at the 2016 World Junior Championships in Taarnby, Denmark. 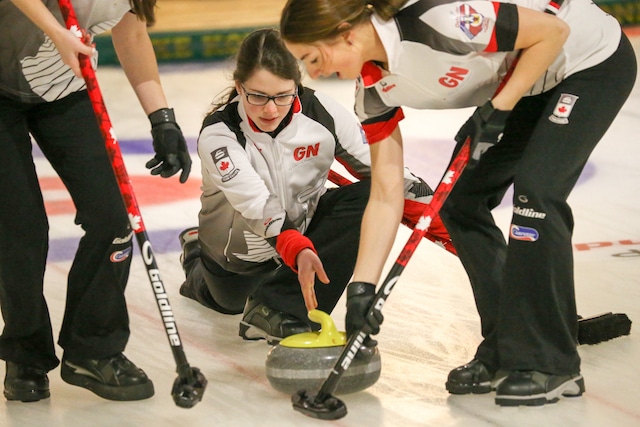 Fay and her Chester, N.S., team of third Kristin Clarke, second Karlee Burgess, lead Janique LeBlanc, alternate Sarah Daniels, coach Andrew Atherton and team leader Andrea Ronnebeck stole three ends and scored multiple points with hammer to dominate the game against the only other undefeated team in the competition. “It’s a great feeling and they’re a great team,” said Fay. “They put up a strong fight and you just have to make your shots at the end of the day. I think we’ve been fairly consistent although I think we still have room to improve. It’s mid-week, so hopefully we can get a little bit sharper.” The Canadians have been pretty sharp already, having the best record at the event and winning most of their games by a wide margin. But they were tested in the evening game against Japan’s Ayano Tsuchiya, giving up three steals in succession on the way to a close 7-6 win. In the final end, facing two Japan counters, Fay threw a simple takeout to run the opposition out of rocks and keep the winning streak alive. On the men’s side, Team Canada’s Matt Dunstone and his Winnipeg squad of third Colton Lott, second (and vice-skip) Kyle Doering, with alternate Wade Ford at lead and Robbie Gordon sitting out, cruised to a 10-2 win over Turkey’s Ugurcan Karagoz to improve their record to 5-2 and move into a tie for third place with Switzerland, trailing Scotland and USA, both with 6-1 records. 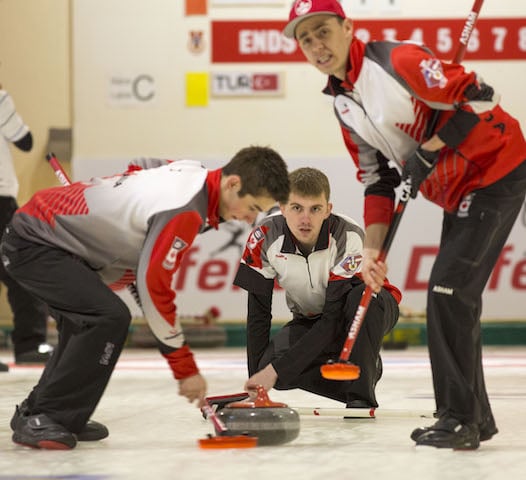 “We’ve put ourselves in a good spot now,” said Dunstone. “We’ve got a big day tomorrow against Norway, one more win and we control our destiny. In fact the (Page playoff) 1-2 game is still alive for us. Our play is better now than when we started. We’re definitely more sharp, we’ve got more feel for the ice. We’re happy with our game and we hope that continues.” The round robin wraps up on Friday with Team Canada women playing one game against Scotland’s Sophie Jackson in the afternoon (8 a.m. ET, broadcast on the World Curling Federation YouTube channel www.youtube.com/WorldCurlingTV, as well as on Curlinggeek.com) and the men facing Norway’s Magnus Ramsfjell (3 a.m. ET) and Russia’s Timur Gadzhikhanov in the final session (1 p.m. ET). Tie-breakers, Page playoff and the semifinal games will take place on Saturday, with the gold- and bronze-medal games on Sunday, March 13, Women’s at 4 a.m. ET, and Men’s at 9 a.m. ET. Event information, including news and live scoring, are available at the event website, www.worldcurling.org/wjcc2016 As well, selected games will be streamed live on the World Curling Federation’s Youtube channel, www.youtube.com/WorldCurlingTV 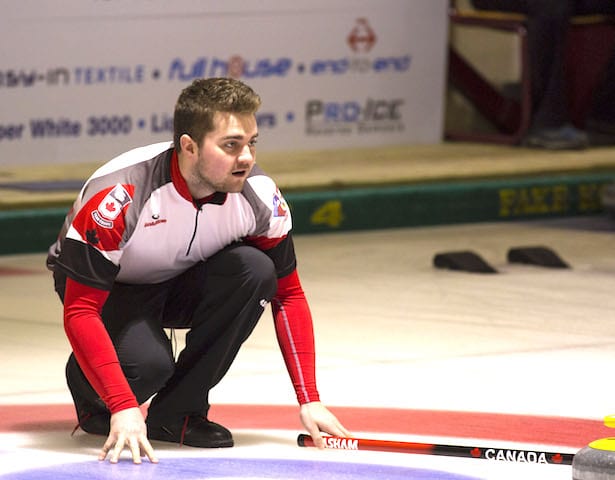