The second draw for the women’s side on Monday saw the reborn Brandon Bobcats program, skipped by Janelle Vachon, take on the Samantha Crook’s as-yet winless Varsity Reds from UNB. The Vachon rink kept Crook and the Varsity Reds off the board until the fifth end, jumping out to a 5-1 lead through five, as Brandon took points in each of the first four ends. Brandon ended up taking the game 8-1 after the mandatory minimum eight ends. As a result, the Bobcats sit in first place at (3-1) after the fourth draw in a logjam with four other teams, while the Varsity Reds stay winless at (0-4). Kristin Clarke’s Dalhousie Tigers, undefeated coming into the draw, dropped their first game of the tournament, losing 8-5 to Jestyn Murphy’s Guelph Gryphons in ten ends. The Gryphons scored six through the final four ends, to make both teams’ records 3-1 and part of the 5 team tie at the top of the leaderboard after the second Monday draw. 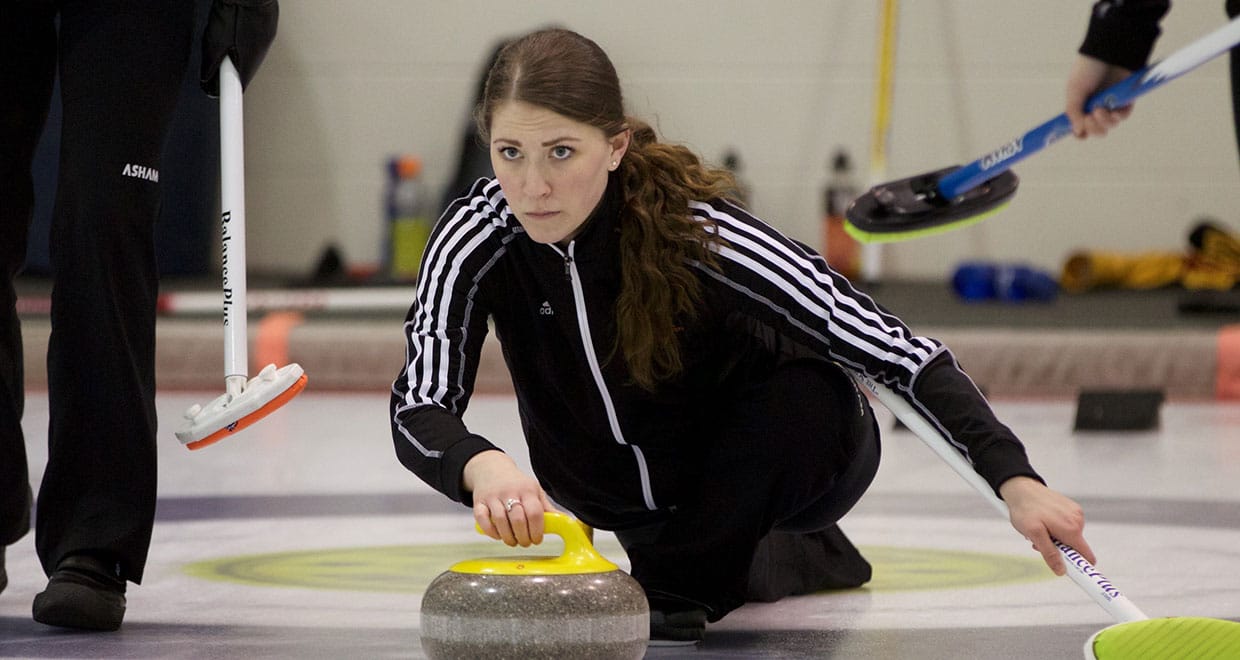 The Thompson Rivers WolfPack, skipped by Corynn Brown, beat Chelsea Brandwood’s Wilfrid Laurier Golden Hawks 7-2 in eight ends. The ‘Pack scored three in the final end to put the game away. Heading into the fifth draw at 7:00 PM, TRU hold a record of 3-1 and they too are tied for first.  Laurier sits at (1-3). The fourth matchup in the women’s draw saw Kelsey Rocque’s Alberta Pandas take on Terri Weeks’ Brock Badgers. The Pandas scored two apiece in each of the final two ends, and defeated the Badgers by a final score of 10-4 after eight ends to keep pace. Rocque’s team now sits at (3-1) for the tournament, while Weeks’ Badgers team has yet to win, sitting at (0-4). Heading into the third of Monday’s draws, the fifth of the tournament, there are five teams sitting at (3-1), meaning it is still a toss-up heading into the back half of the round robin. The 7:00 PM draw will see four of those top five teams compete against each other, as Janelle Vachon’s Brandon Bobcats rink will play Kelsey Rocque and her Alberta Pandas, while Corynn Brown’s TRU ‘Pack will play Kristin Clarke and the reigning World Juniors Champion’s Dalhousie Tigers. The fifth team tied to first place in the women’s draw at (3-1), Jestyn Murphy’s Guelph Gryphons, will play Chelsea Brandwood’s (1-3) Laurier Golden Hawks. The two teams who have yet to win, the UNB Varsity Reds and the Brock Badgers, will face off against each other at 7:00 PM tonight. In the men’s tournament’s fourth draw at 2:00 PM Monday, many eyes were on two undefeated teams going head to head, as the University of Victoria Vikes (3-0), skipped by Corey Chester, took on the Aaron Squires-skipped Wilfrid Laurier Golden Hawks (3-0). 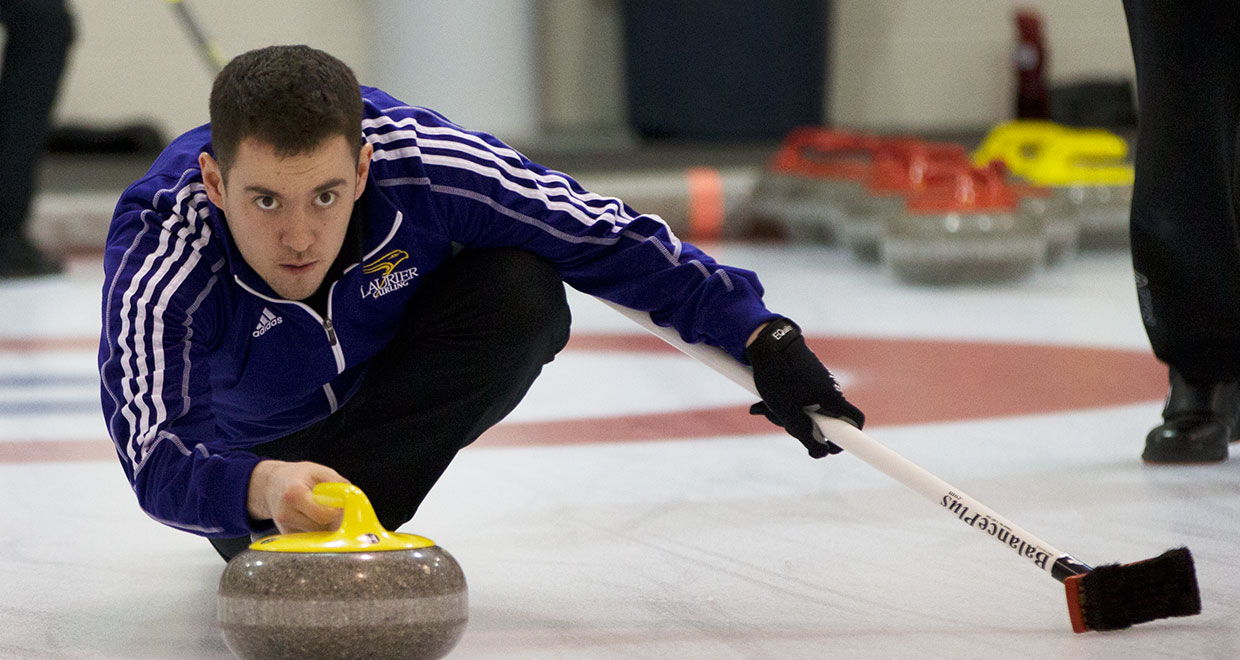 The Vikes and Hawks were close through the first half of their game, with Laurier leading 3-2 after the fifth end. In the sixth, the Hawks had four in the house, but took two points as Vikes skip Chester knocked two out with the hammer. The Vikes, now (3-1) didn’t score again, though, and Laurier, now (4-0), went on to score in each of the final three ends, and win 7-2 after eight ends. The third undefeated team to start the fourth draw, the Alberta Golden Bears (3-0) skipped by Thomas Scoffin, started strong and didn’t let up against John Willsey’s Waterloo Warriors (0-3). At the fifth end break, the Golden Bears were up 6-3, having scored five combined in the third and fourth ends. After scoring four in the seventh end, the Bears took the game by a final score of 10-4 in eight ends. Alberta stays undefeated (4-0) while Waterloo remains winless (0-4) after the second Monday draw. The host and consensus underdog UBC Okanagan Heat, skipped by Justin Nillson, won their second game in a row, beating Adam Cocks’ Saint Mary’s Huskies. The Heat held a 6-3 lead after the sixth end, but the Huskies took three in the seventh to tie the game at 6 through seven ends. The Heat took one in the eighth, to go up 7-6, but the Huskies’ lead Scott Graham threaded his second-to-last rock in the ninth to score one, tying the game at 7 through nine ends. Nillson did not have to deliver his last stone when the Huskies final rock picked on debris. The final score was 8-7 and the Heat stay in the hunt at 2-2 while Saint Mary’s is winless in four games. 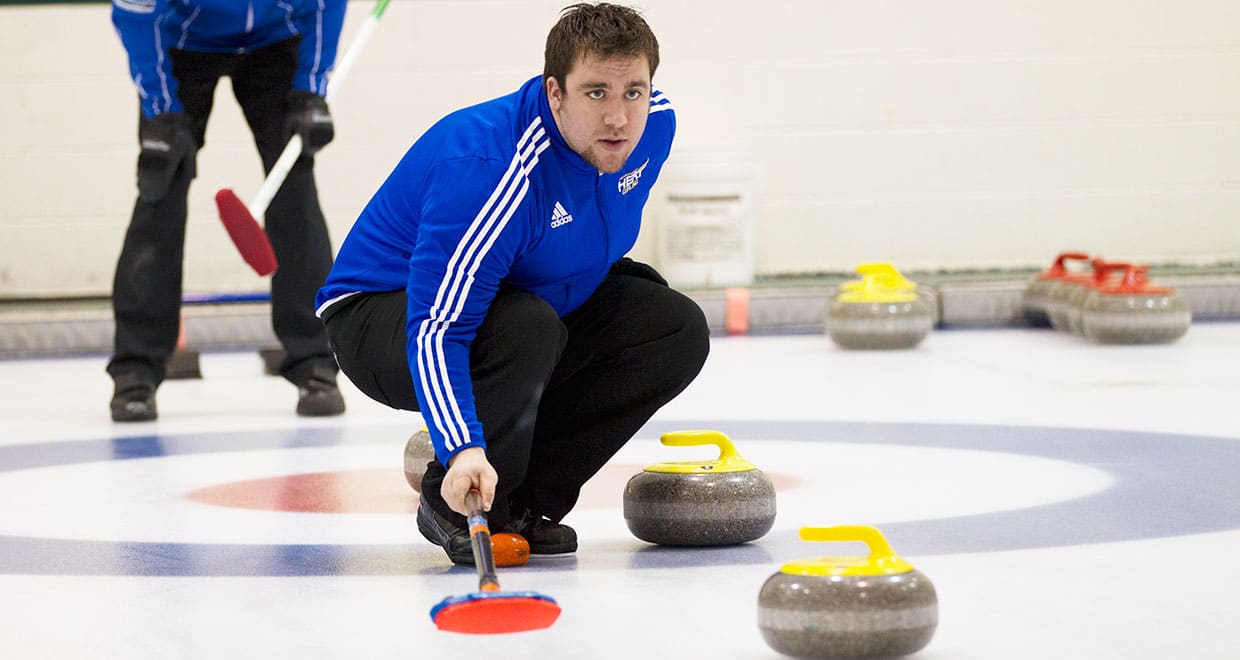 The most evenly contested game of the men’s 2:00 PM draw, was between Eric Bradey’s Brock Badgers (1-2), and Matthew Manuel’s Dalhousie Tigers (1-2). Their game was tied 4-4 after the seventh end. It stayed close right to the end, and was tied 7-7 after the ninth end. The Badgers took a point in the final end, to win it 8-7. Brock evens their record at (2-2), while Dalhousie drops to (1-3). With the fifth draw of the tournament starting at 7:00 PM Monday, Alberta and Laurier remain the only undefeated teams in the championship tournament, and will face off against UBC Okanagan and Brock respectively with a shot to stay perfect heading into the third day. Round robin play concludes Tuesday evening, followed by semifinal and gold/bronze medal matches on Wednesday. Four teams from each group of eight will advance from round robin play to the semifinals. The winners of the CIS / Curling Canada University Championships will represent Canada at the 2017 World University Games in Almaty, Kazakhstan. Full scores, standings and team rosters can be found here: Women: https://www.curling.ca/scoreboard/#!/competitions/2061 Men: https://www.curling.ca/scoreboard/#!/competitions/2062 byline: Grayson Leahy