Colleen Jones will be the home-province hopeful when the 2016 Everest Canadian Seniors kick off Monday in Digby. (Photo, Curling Canada/Andrew Klaver)

It’s the second time that the city has hosted the championships, following the 2011 edition at the same venue. Fourteen men’s teams and 14 women’s teams (representing the 10 provinces plus Northern Ontario, Northwest Territories, Nunavut and Yukon) will compete in the Everest Canadian Seniors, March 28-April 2, with the winners then representing Canada at the 2017 World Seniors. The teams have been seeded into two seven-team pools per gender, based on last year’s results, and will first play a round robin within their pool through Wednesday. The top four in each pool then advance to the Championship Pool for games against teams from the other pool, while the bottom three in each go to the Seeding Pool. At the conclusion of the Championship Pool on Friday, the semifinals will be held Saturday morning, April 2 at 9:30 a.m. AT, pairing 1 vs 4 and 2 vs 3. The winners then advance to their respective gold-medal finals at 3 p.m. while the losers meet in bronze-medal games at the same time. This year’s renewal brings together one of the finest fields ever assembled for a Canadian Seniors. The women’s side boasts several champions, topped by six-time Canadian (1982, 1999, 2001, 2002, 2003, 2004) and two-time (2001, 2004) world champion Colleen Jones of Halifax, who will try to become just the second curler to skip her team to victory at the Scotties, Worlds and Canadian Seniors. Only British Columbia’s Pat Sanders has done so. Last year in Edmonton, the Jones team lost the final to Alberta’s Terri Loblaw. It was the third attempt by Jones to win the Seniors, after competing in 2011 and 2012 as well. She’s joined by long-time teammates Kim Kelly at third and Nancy Delahunt at lead, with Mary Sue Radford at second. Also competing is Alberta’s Cathy King, a Scotties (1998), Canadian Seniors (2012), World Seniors (2013) and two-time (1977, 1978) Canadian Juniors champion, the only curler to accomplish this feat. Other skips with numerous Scotties appearances include New Brunswick’s Heidi Hanlon, Newfoundland and Labrador’s Cathy Cunningham, Saskatchewan’s Sherry Anderson, Prince Edward Island’s Kim Dolan and Debbie Moss of the Northwest Territories. 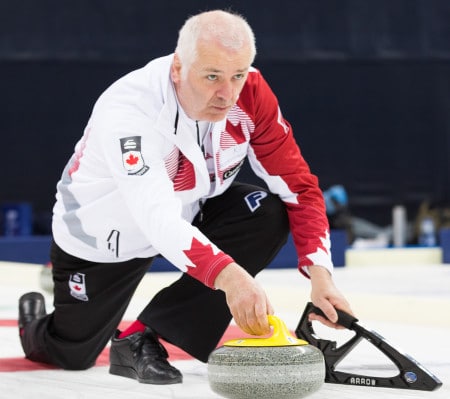 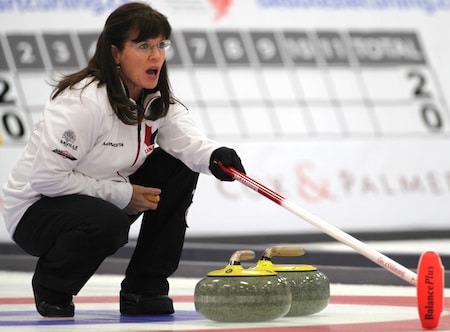 Randy Neufeld of Manitoba is also back to defend his title, which he won last year at Edmonton when defeating Quebec’s Ted Butler in the final. The Canadian Senior Men’s Championship began in 1965 in Port Arthur, Ont. Since then, Manitoba has won a leading 12 titles, Ontario is next with 10 while Alberta has eight. Nova Scotia has won once, that by O’Leary in 2014. The Canadian Senior Women’s Championship began in 1973 in Ottawa. Ontario has won a leading 10 crowns, followed by British Columbia with eight and Alberta with seven. Nova Scotia is a four-time winner, including two by Colleen Pinkney — in 2009 and 2013. The championships were conducted separately until being combined in 1985 at Yorkton, Sask. The World Seniors officially began in 2002. Canada has won a leading nine men’s and 10 women’s titles. Since 2005, the winners of the Canadian Seniors have represented Canada at the following year’s World Seniors. Thus, last year’s winners — Manitoba’s Neufeld and Alberta’s Terri Loblaw — will wear the Maple Leaf in the 2016 World Seniors, April 16-23 at Karlstad, Sweden. This year’s winners will compete at the 2017 World Seniors at Lethbridge, Alta., April 22-29. Live draw results for the 2016 Canadian Seniors will be available at www.curling.ca. For event information, visit https://www.curling.ca/2016seniors. This is the second year of title sponsorship by Everest, the first nationwide funeral planning and concierge service.