BASEL, Switzerland — Kevin Koe’s Canadian team is off to a winning start at the 2016 World Men’s Curling Championship, presented by Ford of Canada. 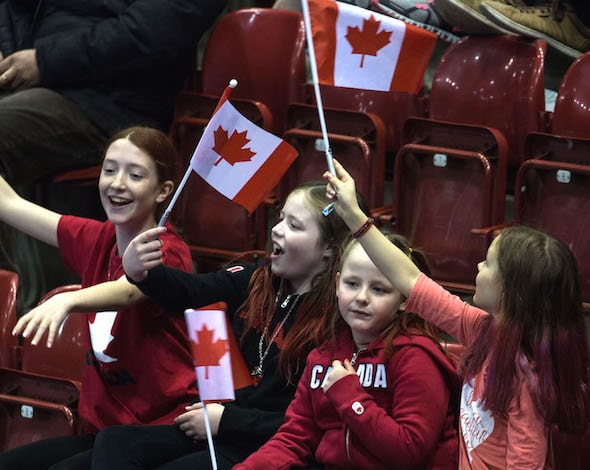 Canadian fans had plenty to cheer about on Saturday as Team Canada won its opener at the World Men’s Championship, presented by Ford of Canada. (Photo, World Curling Federation)

After enjoying an afternoon bye on the opening day of the 12-team world championship at the 9,000-seat St. Jakobshalle, the Calgary-based Canadian team racked up a straightforward 7-3 win over Finland’s Aku Kauste.

While the game was tight on the scoreboard, it was the Canadians — Koe is backed up by third Marc Kennedy, second Brent Laing, lead Ben Hebert, alternate Scott Pfeifer, team coach John Dunn and national coach Rick Lang — who dictated play most of the game.

The teams traded singles for the first five ends, with Canada leading 3-2 at the fifth-end break. 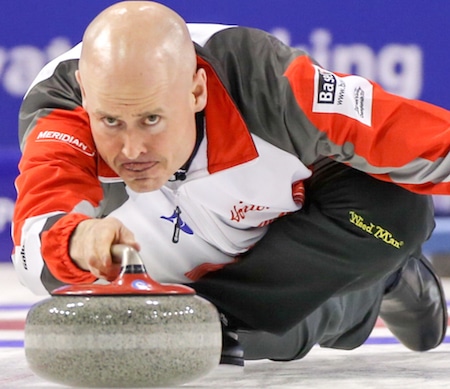 But in the sixth, Canada was able to play a series of perfect guards to protect a rock in the four-foot, and Kauste’s last shot came up short to give Canada a decisive steal of one.

“It was a close game, but we stayed patient and they were chasing us most of the game,” said Koe, who won gold (with a different team) at the 2010 men’s worlds in Cortina d’Ampezzo, Italy. “I don’t even know when they were even sitting two at many points in the game. We were solid, but they were good, too, so it was actually a good game for us to have coming out of the blocks, to get a test like that.”

Koe would put the game away with three in the ninth end — set up by a brilliant double-takeout on his first rock, followed by an open hit to score the three and prompt an offering of handshakes from the Finns.

Outside of his big shot in the ninth, it wasn’t a work of art, agreed, Koe, but it was a good step in the right direction as Team Canada got its first taste of the ice in game conditions, while continuing to adjust to the time change.

“It’s nice not to have to make real hard shots against two or three points early in a game, especially when it’s a close game,” he said. “Solid effort for sure. And the ice looks good, there’s a lot of curl out there, so I think it sets up good for us.”

It was the same Finnish team that Canada’s Pat Simmons defeated in the bronze-medal game of the 2015 Ford World Men’s Curling Championship in Halifax. 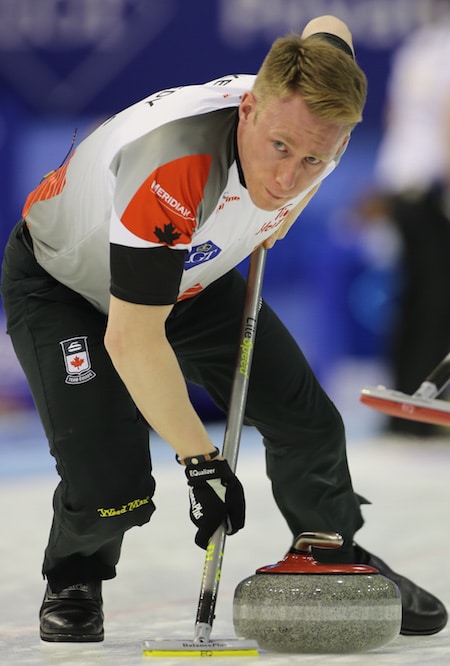 The last time Laing had played a game in St. Jakobshalle was April 8, 2012, when he joined teammates skip Glenn Howard, third Wayne Middaugh and lead Craig Savill on the top of the medal podium after beat Scotland’s Tom Brewster in the final of the 2012 world men’s championship.

“The guys have been making fun of me all week because I don’t remember anything about the town, but I remember what happened in here,” said Laing with a smile. “I was actually looking over at the sheet where Glenn threw the draw to win the world championship the first time we walked in here yesterday. The memories come back right away, and it’s a pretty cool feeling to be back, for sure.”

Canada gets Sunday morning off, and will be back on the ice on Sunday afternoon and evening with games against Denmark’s Rasmus Stjerne (1-0) and John Shuster of the U.S. (0-1).