BASEL, Switzerland — It was just what the doctor ordered for Team Canada at the 2016 World Men’s Curling Championship, presented by Ford of Canada. 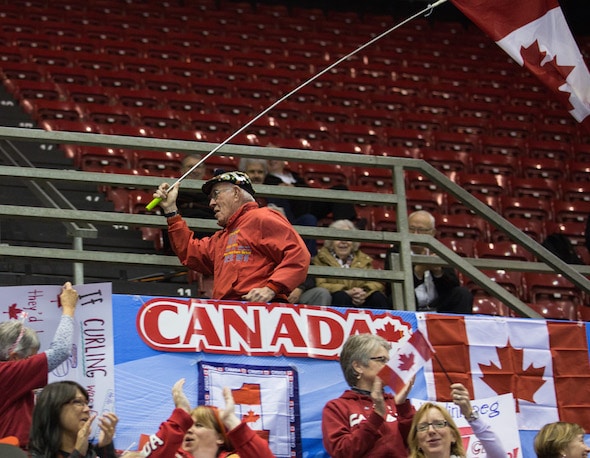 Jack Cox of Haliburton, Ont., is waving the flag for Canada at the 2016 World Men’s Championship in Basel. (Photo, World Curling Federation/Céline Stucki)

After the stress of opening weekend — dealing with the different time zone, different surroundings, making sure family members arrived safely, etc. — Kevin Koe’s Calgary team was finally able to relax on the ice on Monday night at St. Jakobshalle thanks to an easy 9-2 win over Japan’s Yusuke Morozumi.

That result, combined with another lopsided outcome — the U.S.’s John Shuster rolled to a surprising 8-3 win over defending champ Niklas Edin of Sweden — left Canada alone on top of the 12-team round-robin standings with a perfect 5-0 log.

“Obviously we played well tonight,” said Dunn, who did a dandy job in helping keep the ship moving steadily ahead despite a frustrating Sunday when his team was struggling with ice and rocks. “And we’re in the middle of this three-games-in-a-row stretch right now, so any time you get the opportunity to shake hands early and get to bed early, and with our first morning game tomorrow, the timing of this is pretty good.”

Canada did most of its damage against Japan in theft mode. After being forced to a single to open the scoring in the second end, Koe and Co. ramped up the pressure in the third. Koe made a perfect outturn draw that forced Morozumi to attempt a double raise takeout. He overcurled the attempt, leaving Canada with a steal of two.

It got worse in the fourth end when Canada simply kept piling red rocks into the rings, leaving Morozumi looking at six of them with his final-rock draw attempt. He came up well light, allowing Canada to steal five. 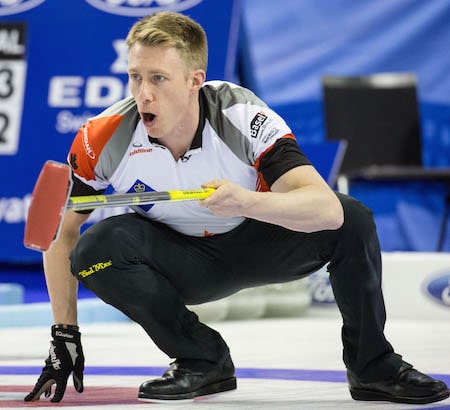 Canada would steal another in the fifth end, and the gloves came off for handshakes after Japan salvaged a sixth-end deuce thanks to a double-takeout from Morozumi.

“That feels nice to get a bit of an easier win,” said Koe. “They made some good shots early to keep them in it. It looked like we were going to get ’em for three in the second (before Morozumi bailed out his team). But we didn’t get frustrated, we kept the heat on them and eventually he missed a couple big ones.”

The Canadians, meanwhile, were more consistent all the way around than during their less-than-perfect two victories on Sunday, when draw weight proved elusive at times.

“The ice still isn’t perfect. But if we were missing draws today, it’s not by 15 or 20 feet (like on Sunday),” said Koe, before adding with a laugh: “At least we were in the rings today. We seemed to have a better handle on it. We’ll see what happens; hopefully it keeps getting better. It’s definitely playable, and that’s all you can ask for.”

Even at their worst on Sunday, though, Dunn liked what he saw out of his team in terms of how it carried itself.

“One of the things we’ve really tried to work on this year is our body language and emotional control,” he said. “When things don’t go on our way, we want people to be able to turn on the TV and not know whether we’re winning or losing. If you watched us play yesterday, you wouldn’t have known if we’re winning or losing, so that’s a credit to the boys. It was a tough day at the office for the boys; we were obviously happy with the two wins. I’m not sure we deserved them, but we certainly hung in there, which is what the sport is all about.”

Pfeifer saw his first action of the world championship, replacing Hebert at lead for the sixth end.

Japan dropped to 3-2 with the loss.