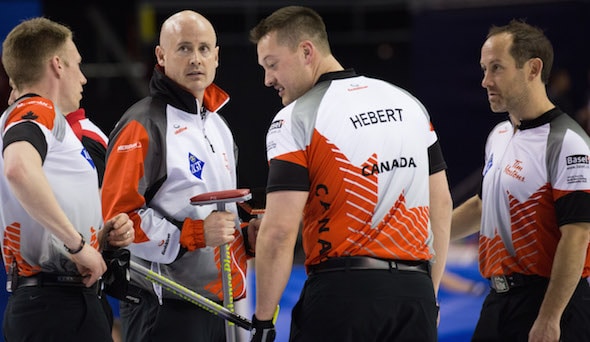 But that frustration following a tense 4-3 extra-end loss to Sweden’s Niklas Edin (5-3) was tempered by the knowledge that the timing of Canada’s first loss at the 2016 World Men’s Curling Championship, presented by Ford of Canada, wasn’t terrible.

Still, thanks to John Shuster’s U.S. team losing 8-7 to Japan’s Yusuke Morozumi on an adjacent sheet, there had been the opportunity to wrap up first place in the 12-team round-robin and a berth in Friday’s Page 1-2 playoff game. 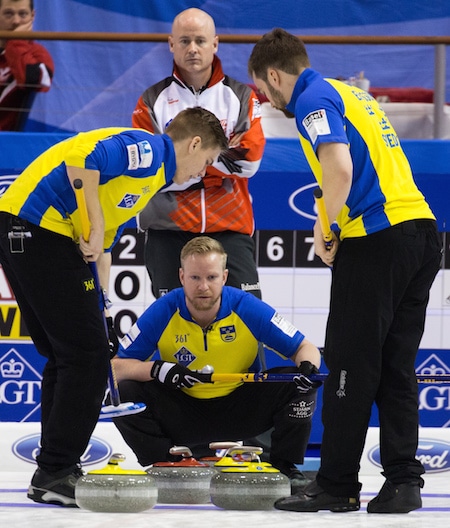 “You never want to lose, obviously,” said Hebert. “We were 8-and-0 and playing pretty well. We had lots of opportunities, and we just missed ‘em. We’ll have to regroup tomorrow and play better against Norway. If we beat them, we’re in first place and in the 1-2 game, so that’s our goal right now. Win one more game against Norway and we’re sitting good.”

The Swedes entered the game on a three-game losing streak, so it was must-win territory.

The teams kept it tight for the first five ends — all blanked by Canada, despite an abundance of rocks in play — before Canada opened the scoring in the sixth when Koe’s tricky tap for a potential deuce resulted in just a single point.

The teams traded singles in the seventh and eighth ends before the Swedes finally broke through for the game’s only deuce.

Koe couldn’t generate the winning pair in the 10th and settled for one, presenting the hammer to the defending world champ in the 11th, and Edin made no mistake with his tapback for the victory.

“We let them off the hook in the first half of the game, for sure,” said Koe. “We had a couple chances for twos or threes and couldn’t convert, and that’s typically what happens in games like that. If you don’t capitalize on your chances, it usually comes back to bite you, and it did that game.”

Still, the Canadians have pulled just about everything they could hope for out of the first five days of this championship — eight victories in nine outings, first place clear of the field, and destiny in their own hands heading into the final day of round-robin play on Thursday — the early game against Norway, followed by a 1 p.m. tilt against a Switzerland’s Sven Michel, who’s on the ropes at 3-5. Wins in either of those games will deposit Canada in the 1-2 playoff — two wins away from a gold medal. 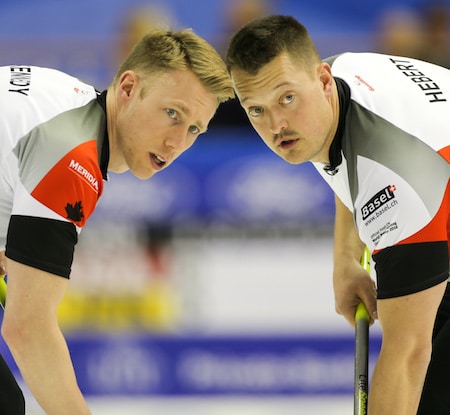 “No sweat,” said Hebert. “We win tomorrow (against Norway), we’re in first place and in the 1-2 game with hammer. We’re going out tonight to have dinner with our families. We’re in Switzerland. We’re 8-and-1. It’s not the end of the world.”

Canada and Norway are 1-2 in the standings, followed by the U.S., Denmark’s Rasmus Stjerne, tied at 6-3, while Japan and Sweden are tied at 5-3.

The Page 3-4 game will be played on Saturday.