It was an ideal start for the Randy Neufeld’s Canadian men’s team at the 2016 World Senior Curling Championships, which kicked off on Friday at the Karlstad Curling Arena. 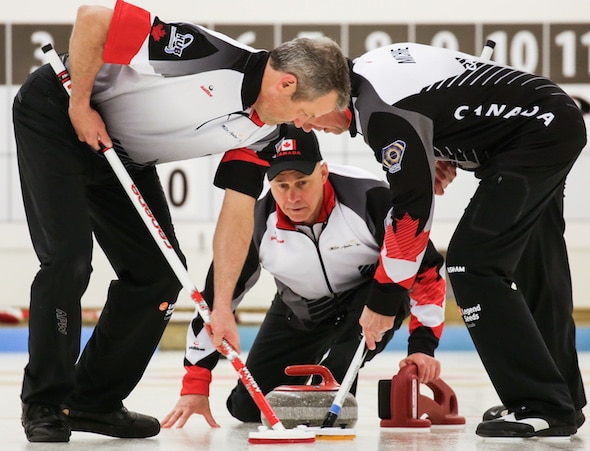 The Canadians, who won the 2015 Everest Canadian Seniors gold medal to qualify for the trip to Karlstad, had opened the game by using their first-end hammer to score a deuce. The Swedes, though, bounced back to tie it with two in the third before the Canadians clamped down.

Canada controlled the hammer by blanking the fourth and fifth ends before putting on the late rally to nail down the victory against a Swedish team that featured vice-skip Mikael Hasselborg, a member of the 1985 Swedish team that lost the world men’s championship gold-medal game to Canada’s Al Hackner in Glasgow, Scotland.

The Neufeld foursome is seeking to give Canada 15th consecutive trip to the men’s gold-medal game at the World Seniors, a run that has produced a leading nine gold medals.

Neufeld and Co. are back in action on Saturday at 7 a.m. ET against Slovakia’s Ondrej Marcek (0-1). A total of 26 teams are contesting the world senior men’s championship; the Turkish men’s team withdrew earlier this week.

Meanwhile, the 2016 World Mixed Doubles Championship will begin on Saturday at Kobbs Arena in Karlstad.

Selected games from the World Mixed Doubles Championship will be streamed live online. Go to the event website, https://www.worldcurling.org/wmdcc2016, to see the games and broadcast schedule.

Canada’s game against China’s Dexin Ba and Rui Wang, Wednesday at 3 p.m., will be streamed live.