After being idle on the opening day of the 2016 World Mixed Doubles Curling Championship in Karlstad, Sweden, Team Canada made up for lost time early Sunday morning. 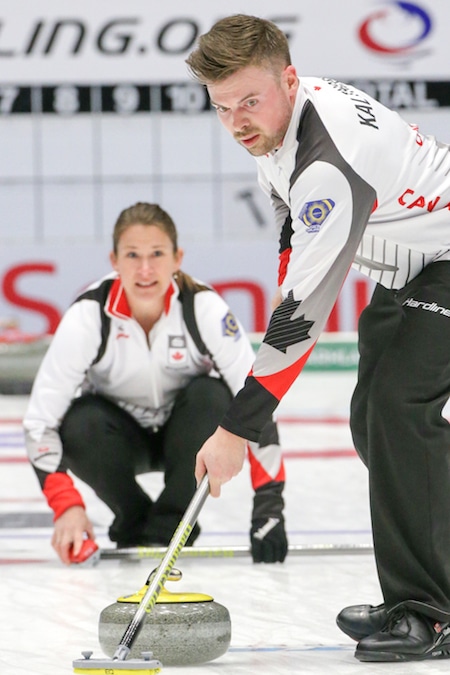 The Saskatoon pairing of Dustin Kalthoff and Marliese Kasner sailed to a 9-3 triumph over France’s Romain Borini and Sandrine Morand in its opening game of the 42-team world championship at Löfbergs Lila Arena.

After the Canadians surrendered a steal of one to France to open the game, they rallied immediately to take control of the game, scoring three in the second end, stealing one in the third and two more in the fourth and never looked back.

Kasner made a lovely draw for the third point in the second end, and it was Kalthoff’s two draws in the third end, both to French rocks just behind the teeline, that set up the stolen deuce.

The French would rebound by scoring singles in the following two ends before Canada put the win in the bank in the seventh end. Kalthoff and Kasner called for a Power Play — starting the end with one of their own rocks buried behind a French corner guard — and turned it into three points to prompt handshakes.

“(The game) was good,” said Kalthoff. “The ice (Canada’s Jamie Bourassa is the Chief Ice Technician) was good. We’re just getting used to it, getting used to where to put the broom out here — there’s lot of curl. We just want to get our draw weight down, and continue learning the ice. We expect it will continue improving right to the weekend. We will be working hard to continue to grasp it as we move forward and take every game as seriously as possible and put our best effort out there.”

The Canadian team — which includes national coach Jeff Stoughton and team leader Jim Waite — and France are in a group with Australia, China, Ireland, Italy and Serbia. The top two finishers are guaranteed berths in the 16-team playoffs, while the third-place finisher also has a chance, based on the Draw-Shot Challenge totals.

Canada returns to action on Monday at 5:15 a.m. ET against Ireland’s father-daughter duo of Neil Fyfe and Alison Fyfe. 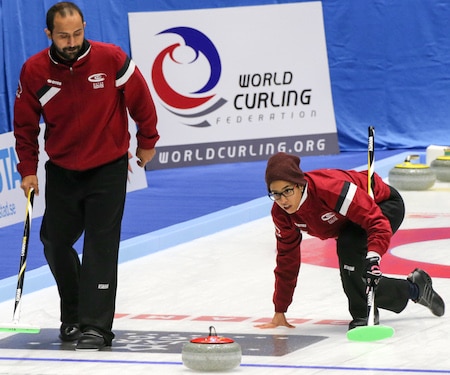 Kalthoff and Kasner will play twice on Tuesday — against Italy’s Marco Pascale and Lucrezia Laurenti at 2 a.m. ET, and against Serbia’s Filip Sotjanovic and Dara Gravara Stojanovic at 8:30 a.m. ET.

While Canada was taking care of business against France, the same draw also featured the first appearance by Qatar at a World Curling Federation-sanctioned event. Qatar’s Yazid Alyafei and Maryam Binali bowed 13-2 to Welsh veterans Adrian Meikle and Dawn Watson.

“We enjoyed the game, it was so much fun to play with Wales in the beginning,” said Binali. “We tried our best and we are looking forward to the next game.”

Selected games from the World Mixed Doubles Championship will be streamed live online. Go to the event website, https://www.worldcurling.org/wmdcc2016, to see the games and broadcast schedule. You can also find live scoring, the schedule and team lineups.