Team Canada — both of them — continues to have an unblemished record at the 2016 World Senior Men’s and Women’s Curling Championships in Karlstad, Sweden. 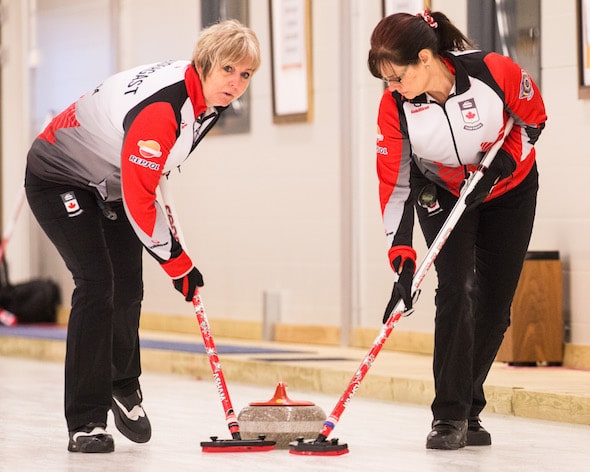 Terri Loblaw’s women’s team from Calgary won a pair of games on Sunday at the Karlstad Curling Arena, while Randy Neufeld’s La Salle, Man., squad won its only assignment on Sunday; as a result, both teams are 3-0 in round-robin play and co-leading their pools.

Loblaw, backed up by vice-skip Judy Pendergast, second Sandy Bell, lead Cheryl Hall, team coach Judy Erickson and national coach Bill Tschirhart, opened her Sunday by romping to a 12- 2 triumph over Australia’s Sandy Gagnon, then followed up with a 6-1 victory over Lenka Safrankova of the Czech Republic.

In the latter game, Canada opened the game without the hammer, but after a blanked first end, the Czechs were forced to a single in the second end, and it would be their lone point.

Canada responded by tying the game with one in the third, took the lead with a stolen single in the fourth, and then stole deuces in the fifth and sixth ends before the Czechs conceded.

Earlier, the Canadian women had little trouble with Gagnon’s Aussies. Canada opened the game with a first-end deuce, stole one in the second and then exploded for a decisive five in the fourth end. Canada scored four more in the sixth end to prompt handshakes.

The Canadians share top spot in Pool A of the 17-team competition with England’s Judith Dixon, who’s also 3-0. 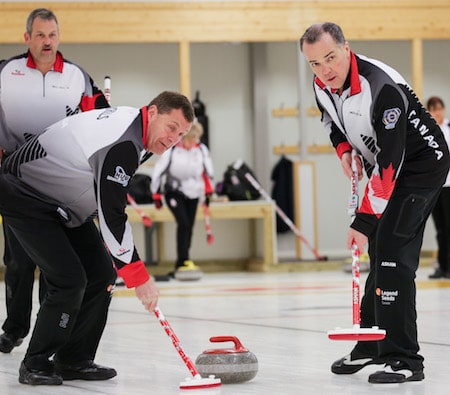 In Pool B, Scotland’s Jackie Lockhart and Norma O’Leary of the U.S. are leading the way, also with 3-0 records.

In men’s play Sunday, Neufeld and Co. — third Dean Moxham, second Peter Nicholls, lead Dale Michie and national coach Tschirhart round out the lineup — made short work of previously unbeaten Ireland’s Peter Wilson, romping to a 10-1 victory. Canada scored threes in the second and fifth ends, and then ended the game by stealing four in the sixth end.

Canada is the lone unbeaten team at 3-0 in Pool B, with the Irish now at 3-1. A total of 26 teams, spread over three pools, are contesting the senior men’s world championship.

In Pool A, Switzerland’s Stefan Karnusian and Geoff Goodland of the United States lead the way with 3-0 records, while in Pool C, England’s Tommy Campbell and New Zealand’s Hans Frauenlob are the pace-setters, also at 3-0.

Both Canadian teams have one game on Monday. The Canadian women will play Finland’s Saara Markkanen (0-2) at 6 a.m. ET, while the men are in action against Gus Van Imhoff of the Netherlands (1-2) at 2 p.m. ET.