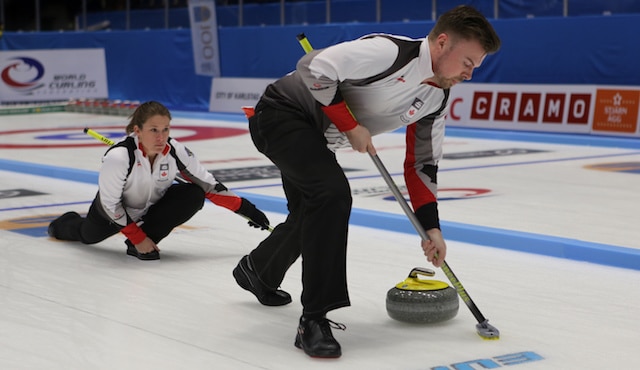 The Canadians started slowly against Italy’s Marco Pascale and Lecrezia Laurenti, giving up a steal of two in the first end. The Saskatoon duo, who are backed by coach Jeff Stoughton and team leader Jim Waite, got back on track to score a single in the second end, then stole the next two ends to lead 5-2 at the break. A big score of four in the sixth put the game away and the Italians conceded the 9-5 Canadian victory after seven ends. “We go into every game hoping to learn something and learn from our mistakes and just get better every game,” said Kasner. “We definitely did that again that game. Coming into this championship we knew it would take us a game or two to catch onto the ice and really figure out what our rocks do out there, and I think we are getting stronger every game.” In their second game of the day, the Canadians cruised to a 14-0 win over the mother-son team of Dara Gravara Stojanovic and Filip Stojanovic of Serbia, which is one of the nations making its first appearance on the world mixed curling stage. “The son-and-mother role out there was fun to watch,” said Kasner when asked about playing the newcomers. “They were really helping each other out. It was good to see their excitement in the game and (what they were) bringing to the game because this is new for them.” Wednesday will be a big day for Kasner and Kalthoff: they’ll play China’s Dexin Ba and Rui Wang who are the only other undefeated team in Canada’s grouping. The game is at 3 p.m. ET and will be broadcast on the WCF YouTube channel. Go to the event website, https://www.worldcurling.org/wmdcc2016, to see the games and broadcast schedule. You can also find live scoring, the schedule and team lineups.