Thiessen blog: How we got to Curling ABG (After BroomGate)

This past week, the World Curling Federation introduced numerous new sweeping and equipment rules during the World Curling Congress in Stockholm. This year’s congress was likely the most discussed Congress of the five held to date, after a year in which a massive sweeping conundrum hung over our sport. 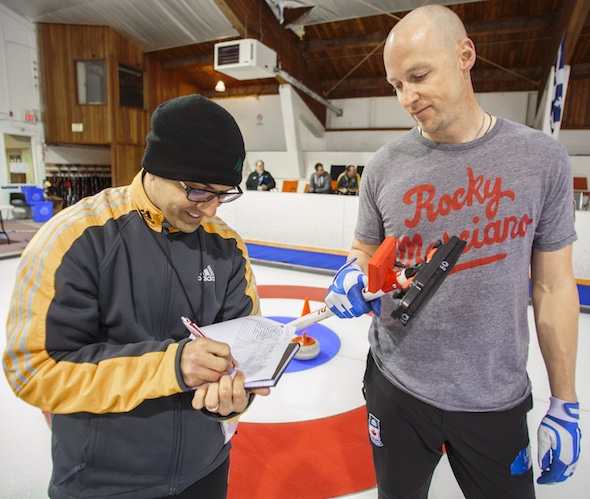 I was one of the athletes on hand in Kemptville, Ont., this past May for the WCF Sweeping Summit; therefore I was part of the athlete group that made recommendations, most of which were brought into the official WCF rule book in Stockholm. Flying to Ontario before the event, I was anxious as I didn’t know where we would end up at the end of our time in Kemptville. I, like most athletes, was hopeful that we would find a solution that was the best for curling at the elite level. Last season, names were called, mud was thrown, brooms were sliding up and down the ice, and most of all I didn’t recognize the sport that we were playing. In the midst of all the drama and mayhem, I sat back and contemplated where we had got to. It seemed like only a few months earlier, I was sweeping a draw to the button with Carter Rycroft to win the Tim Hortons Brier (BOTH of us sweeping the rock … novel idea) and now we are calling line by players’ names, counting the times that our brushes touched the ice, assessing the “sharpness” of our pads and generally not playing curling; we were playing sweeping. Draws around a guard (or hooked guards) were easily removed with hack weight and the game just wasn’t the same. All of the athletes who were in Kemptville, and I think all of those in attendance, including WCF staff, manufacturers, athletes and representatives from Member Associations around the world, wanted a sense of normalcy for the sport. We all hoped we could get there but weren’t sure where the path was going to lead us. Before the Summit, a crucial survey was released for the public and athletes to fill out in regards to sweeping this past season. Although numerous points of view were witnessed, when the results were viewed, two overriding views were held by all groups, providing us clarity for our goals during the Summit: In all of the uproar of last season, many solutions were shared, including the “technique is doing all of this!” I heard numerous people say, “well, you should sweep like they used to … straight across the face of the rock and this will all go away.” As an analytical person, I wondered if that could be the solution. However, I kept coming back to two points: Something didn’t add up there. 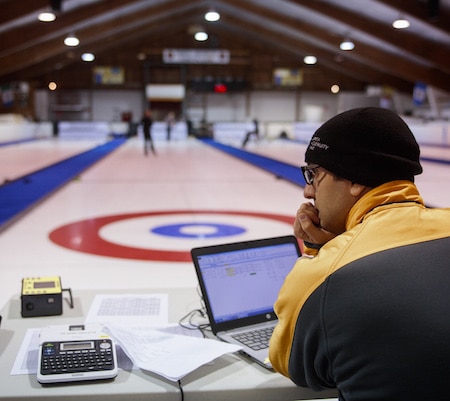 With the help of the National Research Council, we started the testing plan, which included sweeping at a 45-degree angle to the running stone, both with and against the curl, as well as the perceived solution “straight across.” It didn’t take long to see results that we knew were out of scope; not only with our perceptions of normal curling physics as we knew them, but also out of scope for what the fans felt a sweeper’s capacity should be. A controlled draw was thrown and scientifically tested to ensure accurate speed and distance measurements were taken. The control rock stopped in the full 12-foot, at or near the centerline. We then swept with multiple constructions that were in play and ones that were banned during this past season. After ensuring that the throw, with the same rock, had the same speed and release as the control rock, we saw the following: These can be viewed in the Executive Summary provided by the National Research Council. After Day 1, we knew that unusual outcomes could happen to a rock no matter what technique we used when aggressive broom constructions were in play. There didn’t seem to be any technique that simply made the rock follow usual paths with any kind of broom imaginable in hand. We weren’t even considering peeling the onion of having officials on the ice judging sweeping attack paths and each player’s intentions when they were sweeping. We all agreed that would have been a Pandora’s box for the sport. If we decided, say, 75 degrees was the right angle, how do we bring such a human element into play and put those numbers in the hands of officials and tell them ensure nobody is offside? What happens if someone hits 70? What if they get all the way to 90 again and start slowing rocks down … the level of officiating in our sport would reach levels that I doubt anyone would be comfortable with. To me it wasn’t a cop-out of a solution; it was a smart decision based on all factors in play. The data were leading us in one direction, and after Day 1 a potential solution became clear: we needed a solution with which athletes could sweep in any direction they wanted, but they couldn’t stop or back off a rock. This would ensure that sweeping still mattered, and that each game was contested with a level playing field. It took us the better part of the next two days to get to the solution that was announced this week. At the end of the Summit, after plenty of hard work from everyone involved, the entire athlete team was ready to make its recommendations. 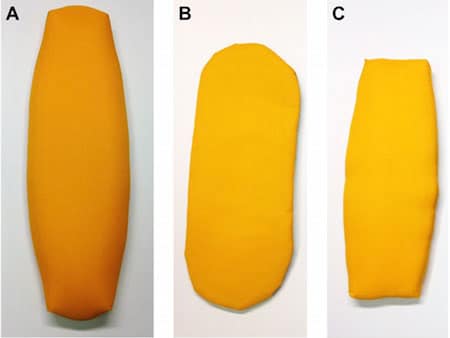 Mustard Yellow Oxford 420D fabric, single source, single batch. I mean who doesn’t love mustard? Many might wonder: why Mustard Yellow? We found out through numerous tests that the darker the pigmentation of the fabric, the more offside results we could get. We swept with new brush heads that were thought to be identical; the only difference was one was black and one was yellow. The yellow reacted within normal expectations. The new black fabric would hold the rock dead straight without ever reaching its breakpoint. After seeing that a few times, we as athletes were not prepared to recommend something as open-ended as a fabric type without specifying colour. We would leave ourselves open to issues once someone found a black fabric, and the broomgate fiasco of last season would be back and we would be left with egg on our face. Apart from colour, the other big difference with Mustard Yellow Oxford 420D fabric (you should get used to hearing that!) comes down to water-proofing. The waterproofing proved to create a coarseness to the fabric that led to scratching. Although we all agreed that a level of waterproofing would be ideal to ensure each brush-head lasted longer, nobody could guarantee a uniform coat of waterproofing on the fabric that would be the same for each roll. So each time the material was cut for a broom to be constructed, it would be a guess as to how much waterproofing was on it. Manufacturers, governing bodies, the athletes would all be at the mercy of the supplier and its quality control. After last season, nobody was in the mood to leave this solution to chance. So, we recommended that the waterproofing side of the fabric is to be put on the foam side of the broom so it was not on the ice; it was the only solution we could stomach. 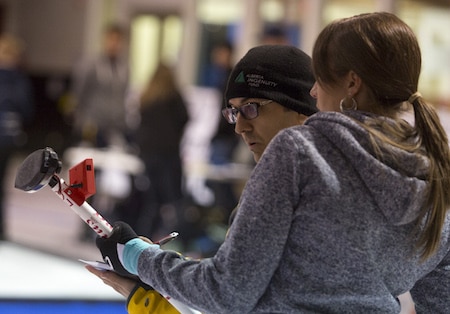 We couldn’t have got here without the help of the National Research Council. They were on hand to document and provide the science to what was happening. They provided placebo tests for us without our knowledge to keep us on our toes. It made us mad, but let’s be honest — it was probably needed to protect against confirmation bias. We all wanted to make sure this could stand up to scrutiny. When we tested the new fabric we did so with every sweeping technique we could think of. One sweeper, two sweepers, snowplow, 45 degrees — you name it, we did it as we really wanted to see what we could do with this stuff. In the end, under the conditions we had in Kemptville ,we couldn’t make it do anything out of scope. So we left Kemptville — anxious but still confident that our recommendations would be a fix, and would stand up to scrutiny. Now after hearing the early reports from players I trust, I am more confident than ever that I feel it will. In the end, our team didn’t put the rules in place; we made recommendations. Without the support of the World Curling Federation to trust the athletes to get together and put aside any perceived bias and do what was best for curling, none of this would have happened. As an athlete group that often has a delicate relationship with our governing bodies, it was a neat experience to be able to work with them; to sit in a room and provide feedback about what we saw, what we did, and why we were making these recommendations. They understood that we all wanted what they wanted: for the sport to not go through what it did last season. To have their support, to agree that this was for the betterment of our sport and enact many of our recommendations, was a huge step forward for curling. Adding in strong disciplinary repercussions for those trying to circumvent these new rules provides a layer of protection for our sport from further black eyes. We all see what you can do with offside materials, so if you secretly use it when your competitors are playing on the up and up, then you should be punished, harshly. After the summer, the work didn’t stop as the recommendations and potential approval in Stockholm led to quite a summer. Compliant fabric needed to be sourced, which would then be a monumental task for manufacturers to start from scratch, with new fabric of which they had zero inventory, and then getting the necessary product ready for the start of the season (before, it should be noted, the WCF could actually approve the new regulations). The manufacturers came through and the new fabric is in play as we speak on the Tour and all elite competitions. Without their work and their desire to put last season behind us and start on a better path, we wouldn’t have this accepted solution today. So that’s how we got here. That’s how we got to Curling ABG (Curling after BroomGate). People are still going to try every different sweeping techniques to get every advantage that they can. The one saving grace is that if one team can do it but you can’t? Well, that’s on you because you have the same brooms they have. So get better. Shot-making is back in the hands of the players in the hack and sweeping prowess is back to those with strong technique and a solid work ethic that improves their strength and stamina. It’s not in the hands of the players with the better tools in their hands. Let’s see who the best curlers in the world are without any rhetoric from anyone. That will be a nice change.