Gunner has CTRS target on his back going into weekend events

It’s early in the season, but there seems to be something a little strange happening on the Canadian Team Ranking System leaderboard. Winnipeg’s Jason Gunnlaugson, who’s only played sporadically in high-level events in recent seasons, currently holds the top spot after qualifying in all three events on his team’s schedule thus far, and winning one of them. 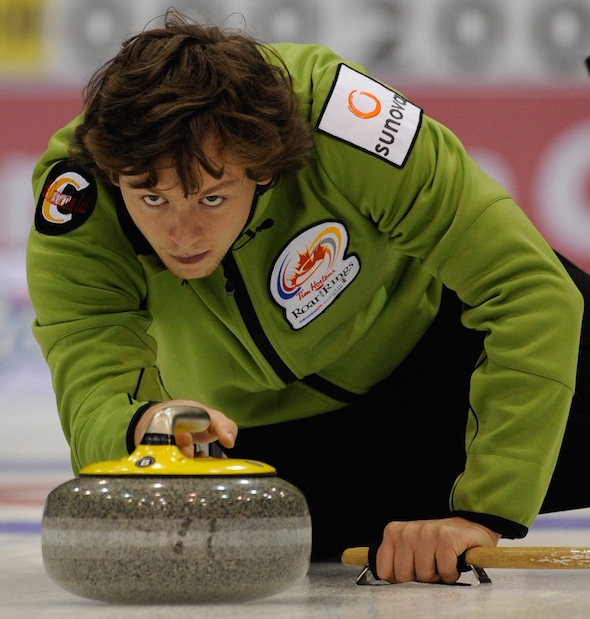 Jason Gunnlaugson and his Winnipeg team are on top of the Canadian Team Ranking System standings heading into play this weekend. (Photo, Curling Canada/Michael Burns)

With a number of the country’s top teams in action this weekend, though, the “Gunner” is about to become a target.

It wasn’t that long ago when the top two spots on the CTRS leaderboard were consistently filled with the same two names: Mike McEwen and Brad Jacobs. While McEwen (Winnipeg)  finished third last season, and Jacobs (Sault Ste. Marie, Ont.) sixth, they’re both looking to improve their position this season, and there’s no doubt they’re both aiming for that top spot — starting with this weekend’s World Curling Tour College Clean Restoration Curling Classic in Saskatoon.

Team Brad Gushue of St. John’s (who’s still on the DL with a nagging hip injury) is ranked No. 1 on the World Curling Tour Order of Merit (a scale that factors in two seasons worth of results), while reigning Tim Hortons Brier and world men’s champ Kevin Koe of Calgary is a close No. 2 — the opposite order in which they finished last year on the CTRS. But the CTRS points reset each season, meaning a hot start has Gunnlaugson out front early.

While neither Gushue nor Koe is in the Saskatoon event, the next six highest WCT-ranked teams are in the field, looking to make up ground. And with Gunnlaugson and Co. playing in a smaller Winnipeg event (worth fewer points), the Saskatoon winner would jump right in the mix near the top of the leaderboard.

(Gunnlaugson, of course, came by that “Gunner” nickname honestly. CHECK OUT THIS VIDEO from the 2008 Canadian Mixed in Calgary, where he was throwing some five-second-or-less peels that had the fans oohing and aahing).

So far this season, McEwen and Jacobs have only played one event each, and both bowed out in the quarter-finals of their respective competitions. Toronto’s John Epping has played more, but only cashed in major points once, losing a semifinal. The list goes on… Reid Carruthers (Winnipeg), Steve Laycock (Saskatoon), Edmonton’s Brendan Bottcher; all have had a couple events, with no event wins, and some early playoff exits. All of them are in Saskatoon and looking to improve.

This weekend, a stacked field of 32 teams is playing a triple-knockout event worth a total of $50,000. Not only is there a pile of top-tier Canadian talent (not nearly limited to the list above), but there are also some international stars on the roster, including two-time world champion Niklas Edin (Sweden) and world champ and Olympic silver medallist Thomas Ulsrud of Nortway; not to mention teams from South Korea, Japan, and several from the United States.

Gunnlaugson, meanwhile, will be taking part in the Mother Club Fall Curling Classic, a 24-team event with a purse of $12,000. While most of the talent is Manitoba locals, there is still plenty of competition including two two-time Canadian junior champions Matt Dunstone and Braden Calvert.

Most of the top women’s teams have the weekend off, but there are still CTRS points up for grabs at events in Kitchener-Waterloo, Ont. (KW Fall Classic), Winnipeg (Mother Club Fall Classic) and Lower Sackville, N.S. (Lakeshore Curling Club Cashspiel).