There will be some Olympic fever in the air this weekend in Portage la Prairie, Man. 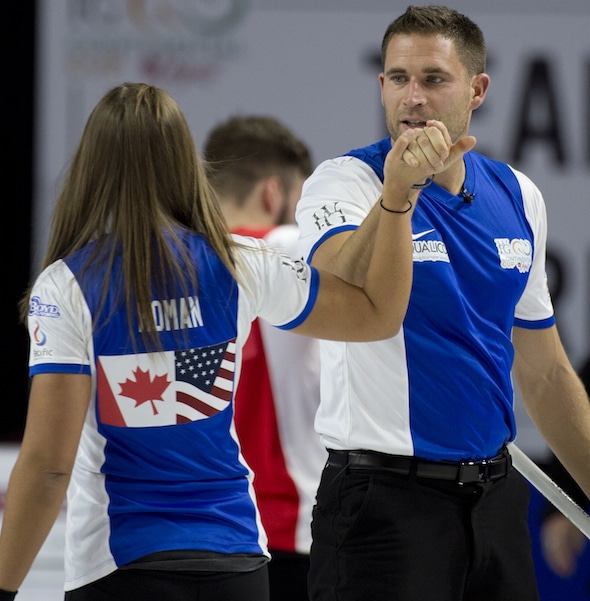 The top-placing Canadian team will qualify directly for both the 2018 Olympic Mixed Doubles Trials, as well as the 2017 Canadian Mixed Doubles Championship in Saskatoon.

The Trials will decide Canada’s mixed doubles team for the 2018 Winter Olympics in PyeongChang, South Korea, where mixed doubles will make its Olympic debut.

First, though, Canada needs to qualify for the eight-team field in PyeongChang; that won’t be determined until after the 2017 World Mixed Doubles Championship in Lethbridge, Alta.

But the jockeying is already underway amongst Canadian teams hoping to be in the mix for PyeongChang, as evidenced by the strong field in Portage la Prairie.

Big names in the mix include the husband-and-wife pairing of Jennifer Jones and Brent Laing, along with Rachel Homan and John Morris.

They’ll be looking to join already-qualified Marliese Kasner and Dustin Kalthoff in the Trials field; Kasner and Kalthoff are also in the field on Contention, along with contingent of international teams from the U.S., Russia, China, Scotland and South Korea.

Meanwhile, on the four-player team front, if you’ve been keeping an eye on the Canadian Team Ranking System leaderboard this season, you’ve probably noticed that it looks a bit . . . different. The powerhouse squads who have dominated the landscape for the past several years aren’t near the top where they’re usually found, and some have barely scored any points at all.

Granted, the season is young, and we haven’t even reached October, but one is forced to wonder how long some of these top-tier teams will be buried down the list.

This weekend, expect some of that to change. Although Homan, ranked No. 1 on the World Curling Tour Order of Merit, is taking the week off from traditional four-player team play, Jones (most of the team, anyway) and Sweeting are in action, albeit on opposite sides of the world.

Team Jones is heading to Sweden for the Stockholm Ladies Cup, where longtime Homan second Alison Kreviazuk will fill in while Jones plays in Portage. As the only Canadian team in Stockholm, they’ll face all of Europe’s top talent, including Scotland’s Eve Muirhead, Swiss teams skipped by two-time world champ Binia Feltscher, Silvana Tirinzoni and Alina Pätz, as well as Swedish sqauds led by Anna Hasselborg and Cissi Östlund.

With Jones back home in Canada, third Kaitlyn Lawes will skip.

Sweeting,on the other hand, is headed to B.C.’s Okanagan region for the P for the Prestige Hotel & Resorts Curling Classic in Vernon. This 28-team event has a purse of $41,500 and features a few notable teams, all of whom are looking for CTRS points.

Calgary’s Chelsea Carey, reigning Scotties Tournament of Hearts Champion, is currently the highest CTRS team in the field. Edmonton’s Kelsey Rocque is not far behind. Former Manitoba champs Kerri Einarson and Cathy Overton-Clapham (both from Winnipeg), and four-time Saskatchewan winner Stefanie Lawton round out a strong field, which means that whoever wins this event will move up the CTRS rankings and likely into the top five. Carey could reach as high as second.

Like Team Jones, Team Brad Gushue has travelled to Europe without its skip, who is still recovering from a hip injury.

Elsewhere, it’s a pretty quiet week on the men’s tour with smaller events in Vernon, Edmonton, and Winnipeg.