We don’t know which duo will represent Canada in Mixed Doubles at the next Olympics, but who well-known curlers just threw their name in the ring. With a win at the Canad Inns Mixed Doubles Championship in Portage-la-Prairie, Man., Ottawa’s Rachel Homan and Calgary’s John Morris earned a berth to the Mixed Doubles Trials, which will be held in January 2018. For Jeff Stoughton, head of Canada’s mixed doubles development, it was a welcome result. “We’re getting better,” he said of Canadian doubles teams. “We had two [Canadian pairs] in the semifinals, which was positive. We’re right there with the best teams in the world.” 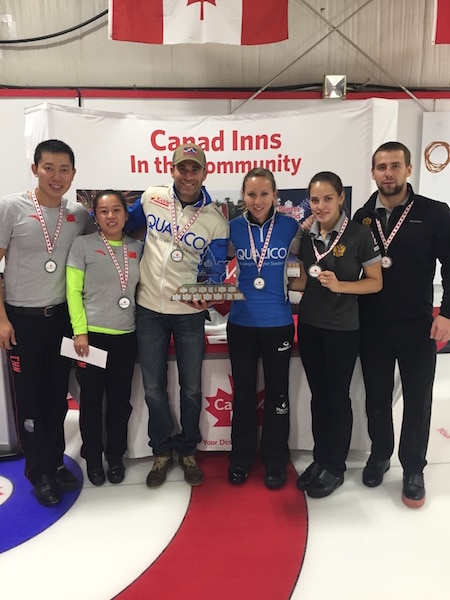 For Morris, it was a big step forward to reaching another Olympics. “We’re ecstatic,” he said. “It’s great to have a chance to represent Canada in a new discipline. We’re just trying to get better, to develop and learn from the best competition.” He also stressed the importance of events like the Portage bonspiel. “It’s great to have these opportunities. For Canad Inns to support a new discipline, and to have an event like this is only going to help grow the sport.” Stoughton agreed. “The event was great. Lots of great curling, and great ice conditions. We also had some top international teams, including two teams that were medallists at the last world championship.” Morris and Homan were joined in the semifinals by fellow Canadians Jennifer Jones and Brent Laing (Horseshoe Valley, Ont.), as well as Russians Anastasia Bryzgalova and Alexander Krushelnitsky, and Rui Wang and De Xin Ba. The field also included the Canadian representatives from the past three World Championships including Kim and Wayne Tuck (Ontario), Kalynn Virtue (formerly Park) and Charley Thomas (Alberta), and Marliese Kasner and Dustin Kalthoff (Saskatchewan). The 2013 Canadian champ Robert Desjardins (Quebec) also played but now has a new partner, his daughter Emilie. With 16 more spots up for grabs at the Canadian Mixed Doubles trials, it’s safe to say that the discipline will garner a lot more attention in the year to come. Elsewhere.. Team Brad Gushue reached the quarterfinals at the Swiss Cup in Basel, Switzerland. Playing again without Brad, but instead with spare Pat Simmons, Mark Nichols skipped the squad into the playoffs but fell to the eventual champion Niklas Edin (Sweden). Gushue earned 21.995 points on the Canadian Team Ranking System leaderboard, which moves him into first place for the season. Team Jennifer Jones had a similar skip-less run at the Stockholm Ladies Cup. Kaitlyn Lawes skipped the Winnipeg foursome to a quarterfinal result, with Alison Kreviazuk (formerly of Team Homan) filling in. Jones earned 25.768 points, which moves her into second on this year’s standings. Marla Mallet (Walnut Grove, B.C.) beat Cheryl Bernard (Calgary) in the final of the Prestige Hotels & Resorts Curling Classic taking home $8,900 and more than 50 points on the CTRS. Langley, BC’s Tyler Tardi won the men’s side.