The World Curling Tour is entering its ninth week, and it seems that some of Canada’s most popular teams have barely started their seasons. While we’ve seen some teams week after week at events across the country, others have approached the start of the season a little more deliberately. 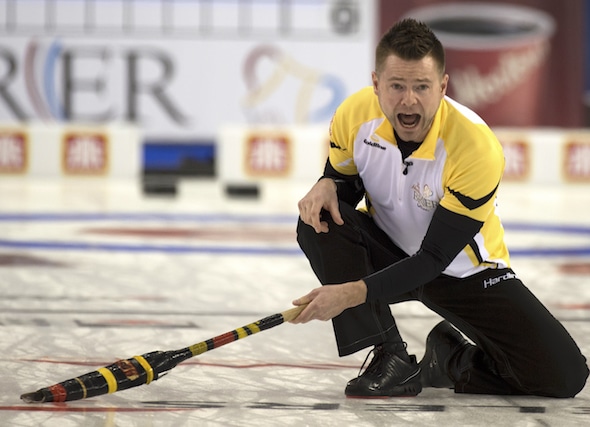 Mike McEwen and his team from Winnipeg are looking for CTRS points this weekend in Portage la Prairie, Man. (Photo, Curling Canada/Michael Burns)

Winnipeg’s Mike McEwen will be back on the ice this weekend, playing only his fourth event of this still-young season. In the past, that would be normal for a team in mid-October, but with events starting earlier each year (the WCT had two international events in August), many teams have played in six or seven events by now.

“I don’t think we’re playing any less than we usually do,” said McEwen. “There are just a lot of events, and it’s a long season. We don’t want to burn out.”

McEwen spoke on the phone from Portage la Prairie, Man., where he had just finished his first game at the Canad Inns Men’s Classic. With a win over local Tom Hyde, McEwen took his first step toward a share of the $60,000 purse, and some major points on the Canadian Team Ranking System standings.

“We look for quality events,” McEwen said. “A lot of teams have to chase points to try to get into the Grand Slams, but we’re in a fortunate position to not have to do that. Starting at Thanksgiving is when our season really gets going. The Slams are where the big points are going to come.”

Saskatoon’s Steve Laycock, coming off a win last weekend in Edmonton, is also the defending champion of this event. The reunited Jim Cotter/John Morris team, which finished second in the 2014 Tim Hortons Brier and the 2013 Tim Hortons Roar of the Rings, will also be there.

“This is a great field. It has almost all of the big names you’d see at a Slam,” said McEwen. “It’s nice because it makes it worth a lot of points… This could be one that really counts for the CTRS.”

Speaking of Mixed Doubles champions, many of them are in action this weekend in Sherwood Park, Alta., at the Service Experts Doubles Classic. Reigning Canadian champions Brett Gallant and Jocelyn Peterman headline a field stacked with other former winners, including Kim and Wayne Tuck, and Kalynn Virtue (playing with her father Kevin Park, as her regular teammate Charley Thomas is busy at the Portage event).

Last season’s national silver-medallists, Geoff Walker and Laura Crocker, and bronze-medallists, Marliese Kasner and Dustin Kalthoff, are also in the field. And while they haven’t won any major mixed doubles events yet, it’s safe to say the husband/wife combination of Dave and Heather Nedohin will make its presence felt, especially considering Heather is the manager of the refurbished Sherwood Park club. Thirty-two teams will compete for more than $13,000 in prize money.