Another strong win for Team Canada at World Mixed

Team Canada continues to close in on a playoff spot at the 2016 World Mixed Curling Championship in Kazan, Russia. Edmonton’s Mick Lizmore — backed by third Sarah Wilkes, second Brad Thiessen, lead Alison Kotylak and coach Melissa Soligo — remain undefeated with a 4-0 record after cruising to a 7-2 win over Andorra’s Josep Garcia (1-3) on Monday afternoon at the Kazan Sport Palace. 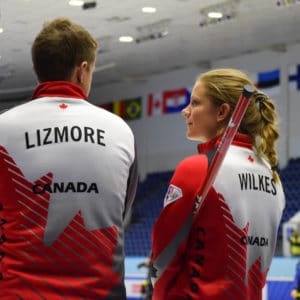 “It was a pretty solid game,” said Lizmore after the win. “They made a lot of shots early on and it felt like there were a couple of moments there that we were up against it, but overall we were pretty happy with how we played.” After opening with a blank, Canada took a 2-1 lead in the second, thanks to a precision run-back double by Lizmore to remove the Andorran shot stone – placed by a sharp-shooting Garcia on a hit-and-roll. Leading 5-1 after the break, Team Canada held Andorra to a single, then capped off the sixth end with an open draw for three, and handshakes. Canada remains the only perfect team in its eight-team round-robin pool and needs only a top-three finish to nail down a spot in the 16-team playoff, but for now, Lizmore says his team is taking it game by game. “Honestly I think it’s about trying to get a bit better every game and just fine tuning regardless of outcome,” he said. “Just taking care of the small details.” Team Canada will take that undefeated momentum into Tuesday’s game (9 a.m. ET) against Belgium’s Loes Willems (0-2). The 37 teams in Kazan are split into five round-robin pools, and the 16th playoff team will be the fourth-place team from the five pools with the best pre-game Last Shot Draw distance.