Grand Slam kicks off the season in Okotoks

It’s beginning to feel a lot like curling season. The weather is cooling off, leagues across the country have started running, and the first Pinty’s Grand Slam event is under way in Okotoks, Alberta. The World Financial Group Masters brings all of the top teams together for the first time this season. Previous World Curling Tour events have had some, if not most, of the big dogs in some events, but for this one… the gang’s all here. 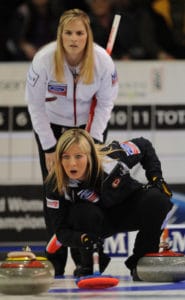 Jennifer Jones and Scotland’s Eve Muirhead are both competing in the first Grand Slam event of the season in Okotoks, Alta. (Curling Canada/Michael Burns photo)

With the WCT’s top 15 men’s and women’s teams represented, each draw has nothing but big names facing each other. The first televised draw (Thursday, 2:30 p.m. ET) will likely feature an all-Manitoba battle between Winnipeg’s Reid Carruthers and Mike McEwen. Also on the ice at that time are Kelsey Rocque (Edmonton) versus EunJung Kim (Korea), Tracey Fleury (Sudbury, Ont.) versus Anna Hassleborg (Sweden), and a clash of recent world champions; Scotland’s Eve Muirhead and Switzerland’s Alina Paetz. Later in the day, Winnipeg’s Jennifer Jones (currently ranked first on this season’s Canadian Team Ranking System) will face last year’s Scotties Tournament of Hearts champion, Chelsey Carey (Calgary). Rachel Homan and Team Brad Gushue, who are both ranked No. 1 on the World Curling Tour Order of Merit (for their gender) will be in action on the evening draw. Again, Team Gushue is playing without skip Brad Gushue, who is recovering from an injury. Edmonton’s Charley Thomas has been called upon to fill his spot, as third Mark Nichols has moved up to skip. Even without Brad, the St. John’s foursome has moved into the top spot on the WCT and CTRS leaderboards. Ottawa’s Homan, meanwhile, has won the only two events in which she’s played this season, and seems to be gearing up for another dominant run. She’s won this event three of the last four seasons. With all the top teams represented, this event will be worth maximum points, meaning the winners will gain major ground (or extend their lead) on the CTRS. Rankings moving forward are used to qualify for future Grand Slam events, but also potentially for Olympic trials or pre-trials berths. The WFG Masters is the first of seven Grand Slam events that will be televised on Rogers Sportsnet this season. The next will be the Tour Challenge, two weeks from now. In late November, TSN will broadcast the 2016 Le Gruyere European Championships from Glasgow, Scotland. Curling Canada’s Season of Champions will begin televising events on TSN in early December with the Home Hardware Canada Cup in Brandon, Man., followed by the All-Star Skins Game in Banff, Alta., and the World Financial Group Continental Cup of Curling from Las Vegas.