Toronto’s John Epping has won World Curling Tour events before, but this weekend’s victory at the CookstownCash presented by Comco Canada Inc. in Cookstown, Ont., moved him to places he’s never been. 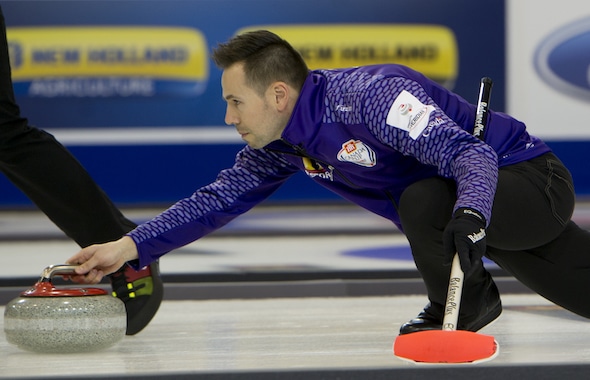 With 5-4 win over Switzerland’s Peter de Cruz, Epping moved into first place on the Canadian Team Ranking System leaderboard, and third place in the WCT Order of Merit.

Epping not only earned $7,000 but also 42.548 points on the rankings. That moved his squad past Sweden’s Niklas Edin and Winnipeg’s Reid Carruthers on the world rankings, and past “the Brads” (Jacobs and Gushue) for top spot on this year’s CTRS.

“There were a lot of good teams there, so we were lucky there were enough points on the line that it was pretty impactful for us. It’s pretty exciting,” said Epping, already on his way to his next event, the Grand Slam Tour Challenge in Cranbrook, B.C.

Leading the CTRS at the end of this season, or at the end of the two-year span (2015-2017) will earn a team a direct berth to the Tim Hortons Roar of the Rings in December 2017 in Ottawa, where Canada’s 2018 Olympic four-player teams will decided.

“With all the trials stuff on the line, it’s a pretty big points chase. Especially if you don’t with the Brier or the Canada Cup, you gotta make sure you have those points,” Epping said. “Qualifying is always good, but winning an event is pretty big.”

Those who didn’t win, but managed to earn some qualifying points included Glenn Howard (Penetanguishene, Ont.), who bowed out in the quarter-finals. Howard has been on the Grand Slam bubble, as his new squad hovers around the No. 15 spot on the WCT rankings. With this points earned in Cookstown, he’s back in but the next Slam invites were based on rankings from two weeks previous, so we may not see Howard in Sault Ste. Marie’s GSOC “National.”

Across the province in Kemptville, Ont., Charlottetown’s Robyn MacPhee defeated Japan’s Ayumi Ogasawara in the final of the Royal LePage OVCA Fall Women’s Classic. Her first bonspiel win of the season earned her 33.091 points and $5,500.

Toronto’s Hollie Nicol and Whitby, Ont.’s Danielle Inglis were semifinalists, and each earned 20.091 points. Sherry Middaugh (Coldwater, Ont.) reached the quarter-finals, and earned 14.1819 points, which moves her into fifth place on the CTRS.

Already players are headed to the next event. The GSOC Tour Challenge begins Tuesday night in Cranbrook.